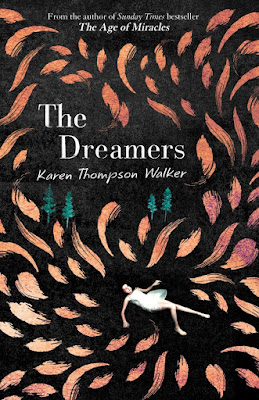 'The Dreamers' by Karen Thompson Walker

Receive from the Publisher
From the BLURB:
One night in an isolated college town in the hills of Southern California, a first-year student stumbles into her dorm room, falls asleep—and doesn’t wake up. She sleeps through the morning, into the evening. Her roommate, Mei, cannot rouse her. Neither can the paramedics, nor the perplexed doctors at the hospital. When a second girl falls asleep, and then a third, Mei finds herself thrust together with an eccentric classmate as panic takes hold of the college and spreads to the town. A young couple tries to protect their newborn baby as the once-quiet streets descend into chaos. Two sisters turn to each other for comfort as their survivalist father prepares for disaster.
Those affected by the illness, doctors discover, are displaying unusual levels of brain activity, higher than has ever been recorded before. They are dreaming heightened dreams—but of what?
Written in luminous prose, The Dreamers is a breathtaking and beautiful novel, startling and provocative, about the possibilities contained within a human life—if only we are awakened to them.
'The Dreamers' is the new book from American author, Karen Thompson Walker.
What a banger of a book! I really, thoroughly enjoyed it - which is no surprise since her debut ‘The Age Of Miracles’ was one of my favourite reads in 2012. I still think her debut is my favourite, though there’s such cunning & delightful similarities between the two as Thompson-Walker’s preoccupations & themes become clearer.
She really writes a sort of gothic-science horror, and insidious Dystopia to a degree - by plucking out one little thread from our humanity & very existence, to see how we unravel ... in this book it’s a question of: what if all young women in one small town went to sleep, and never woke up? Soooooooo delicious & insidious: just as ‘The Age of Miracles’ slowed the rotation of the Earth to see what cataclysmic repercussions it would have, in ‘The Dreamers’ it’s a slowing and succumbing in individuals and how everything gets upended. A modern 'Sleeping Beauty' meets 'Year of Wonders' by Geraldine Brooks, for similar examinations of isolation during a time of curious plague ...
Highly, highly recommend this sinister & rather sexy read, an almost philosophical “what if?” to keep you up at night.
4.5/5
Source: alphareader

'The Dreamers' by Karen Thompson Walker