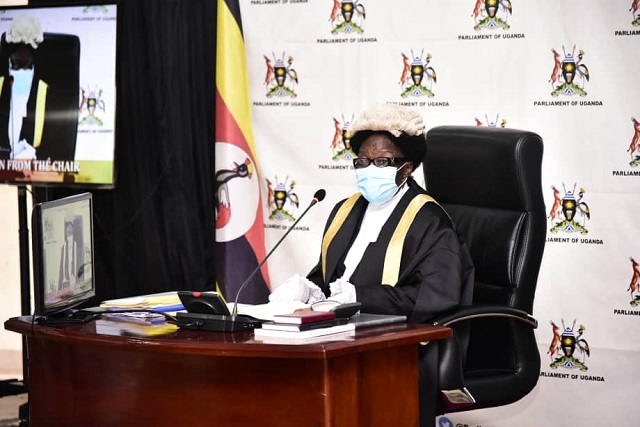 Kampala, Uganda | THE INDEPENDENT | The Speaker of Parliament Rebecca Kadaga has called on concerned Ugandan citizens to sue the Kenyan government for unfair trade practices that infringe on the treaty of the East African cooperation.

This was after a heated debate during plenary on the blocking of Uganda’s dairy products by Kenya.

The debate followed the presentation of a statement by the trade minister Amelia Kyambadde on the continued prohibition of Uganda’s dairy products to the Kenyan market.

She said Kenya was denying import permits to Lato Milk, a brand of Pearl Dairies on grounds that the milk was counterfeit and sub-standard. She says the High Commissioner of Kenya was summoned and a protest note was issued on 15th January 2020 but no response has been received to date. She also noted that President Museveni engaged President Uhuru Kenyatta of Kenya in January 2020 over the same issue.

The minister told the house that on the 27th of February, Uganda’s delegation will head to Nairobi for a meeting with the trade minister of Kenya on the issue and she would be reporting back to parliament.

The minister’s statement infuriated a number of MPs who accused the government of being weak and failing to take tougher measures against the Kenyan government by reciprocating with similar Non-Tariff Barriers.

The Bugiri Municipality MP Asuman Basalirwa noted that there is no hope following the government’s efforts, he proposed that government invokes the provisions of the East African treaty to have the issue resolved as a dispute since all other diplomatic avenues have failed.

The Manjiya County MP Jon Baptist Nambeshe demanded the minister explains why no retaliatory measures have been instituted against Kenya. He observed that Uganda is the only country that respects the provisions of the East African Treaty while the other partner states flout them to the detriment of Ugandan traders and farmers.

The state minister for East African Affairs, Julius Maganda told the house that a summit of the heads of state will take place at the end of this month and the issues will be discussed after which measures will be taken if states fail to agree on how to proceed.

Kadaga while closing debate on the matter encouraged Ugandans to get involved through the treaty for East African Cooperation by taking Kenya to the East African Court of Justice.