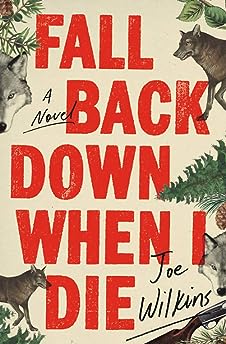 In the Book Notes series, authors create and discuss a music playlist that relates in some way to their recently published book.

Joe Wilkins' brilliant debut novel, Fall Back Down When I Die, is moving, haunting, and unforgettable.

Booklist wrote of the book:

"In his first novel, short story writer, poet, and memoirist Wilkins writes of hardscrabble life on the northern Great Plains with mesmerizing power, creating characters with rich if troubled interior lives who are desperate for agency and haunted by absent fathers. Wendell and Rowdy's slowly blossoming relationship is as lovely and breathtaking as the book's tragic ending is inevitable and devastating. Suffused with a sense of longing, loss, and the desire for change -- asking deep questions about our place in the landscape and what, if anything, we are owed -- this is a remarkable and unforgettable first novel."

In his own words, here is Joe Wilkins' Book Notes music playlist for his debut novel Fall Back Down When I Die:

I was born and raised north of the Bull Mountains, out in the distances of eastern Montana. The little outpost town we called home, where I attended grades K-12, boasted in the 1990 census 166 souls; as of the 2010 census that count was down to 96. It is a far, frontier country, and for much of my life it was all I knew. I splashed in the shallow, muddy river; I fixed fence and branded cattle; I hunted deer and antelope and drove mile after mile up and down those gravel roads.

Yet at the age of nineteen I did something most young people from rural places don't do: I traveled out of state for college, left Montana, though I didn't know it at the time, for good. And in the twenty years since, living and working in spaces that are mostly cosmopolitan, urban, liberal, and college educated, I have often felt like a foreigner or immigrant, someone attempting to learn a whole new place and language. Make no mistake about it, there are vast differences between us. And we ignore, make light of, or hierarchize those differences at our peril.

Fall Back Down When I Die, which is primarily set in eastern Montana in late 2009, just before the first legal wolf hunt in the state, speaks, I hope, across those differences. The rift between the interior and the coasts grows ever wider, and I hope Fall Back Down When I Die humanizes and builds empathy, I hope it troubles the too-easy notions both places have about the other. With this in mind, I've chosen for the Fall Back Down When I Die Book Notes playlist songs that do just that. Songs that travel and haunt and try to explain. Songs that participate in, question, or upend the usual mythologies. Songs that embody the great distances of the American interior, as well as those of the human interior. A number of these songs and artists make appearances in the novel itself, others informed me in the writing process. I hope you enjoy the playlist and the book.

1. Martha Scanlan – August Is a Gate

Fall Back Down When I Die opens in late August, during wheat harvest, a time of hard work and hope across rural America. I remember as young man putting in ten and twelve hour days, working through the weekends, falling to bed covered in dust and chaff, and waking the next morning before sunrise to do it all again. Ever since, it's never quite set right with me that in the wider world August usually means vacation time. So when I first heard Martha Scanlan's “August Is a Gate,” at a gathering on the banks of the Blackfoot River, my heart seized with recognition. Here was someone who knew the same season I knew as a young man, the same changing season the characters in Fall Back Down When I Die journey into. “August is a gate,” Scanlan sings, “swinging in a dry wind.”

No one captures the economic and cultural fear haunting rural America better than Jason Isbell. In “Last of My Kind,” the speaker, a rural kid thrust into an increasingly urban world, laments what he's lost in the transition and how the stories passed down to him (“Daddy said the river would always lead me home / But the river can't take me back in time / And daddy's dead and gone”) don't help him navigate this new space. What's more, by the final verse, “Last of My Kind” manages to help us feel and know the grievance and anger that too often rise out of the fearful, dislocating experience of this cultural transition:

They laughed at my boots, laughed at my jeans
Laughed when they gave me amphetamines
Left me alone in a bad part of town
Thirty-six hours to come back down
Am I the last of my kind?

The action in Fall Back Down When I Die hinges on this growing sense of fear, grievance, and dissolution, and what, for better and for worse, the various characters do to make sense of, refuse, or lash out at the rapidly changing world around them.

I've included a Gordon Lightfoot tune on all but one playlist I've made for Book Notes. Part of that is just Gord is so damn good, but, too, it's because Lightfoot songs, even the easy, breezy ones, are always haunted. “Sit Down Young Stranger” is no exception. The young stranger and his parents—meeting again, it seems, after many years—try and fail to explain themselves one another throughout the song, and it all leads to an odd, abrupt closing couplet: “John loves Mary / Does anyone love me?”

It's a question the main characters of Fall Down When I Die might recognize. Wendell Newman, a young ranch hand working in the Bull Mountains, lost his father when he was just a boy. Gillian Houlton, an assistant principal at a nearby rural school, yet grieves the murder of her husband a dozen years before. These two dead men haunt Wendell and Gillian and, really, the entire book. Like the myth and memory of a long ago rural American, their absences become inescapable presences.

If you turned on the radio in eastern Montana in the late '80s and early '90s, it was pretty good bet you'd catch a song or two by George Strait or Garth Brooks. While both artists are a bit old for Wendell Newman, who comes of age in the late '90s and early '00s, Wendell is, in many ways, someone out of time, or, as Brooks sings, someone “much too young to feel this damn old.” A former high school basketball star, a sad, wondering young man who likes to read and wander in the woods, Wendell is forced to leave community college to come home and look after his sick mother. When she dies, he hangs on to all he's got: a job on a ranch in the Bull Mountains and, later, his young, traumatized cousin, Rowdy, who comes into his care.

Though Strait is singing about another kind of heartbreak, you could just as well apply his sentiments to Wendell and to so many others mired in rural poverty: “Played by the rules but didn't win.”

Gillian Houlton didn't have it easy either, but she put herself through college, traveled across the country, and, after the death of her husband, found a way to buy a house in Billings, the only city in eastern Montana, and raise her daughter, Maddy, all while saving for Maddy's college tuition and generally living in the middle class world.

Yet for these trappings of comfort and security, Gillian knows, as each day she drives forty miles down the highway to her job as an assistant principal at a rural school, that there is another world not far outside her door. And, too, she yet grieves hard as iron for her husband, as well as the life she had with him, a life of adventure, wildness, and love: “Oh but you are in my blood you're my holy wine.”

I remember hearing Tennessee Ernie Ford's “Sixteen Tons” crackle out of the round, dusty mouth of the radio we kept atop the fridge, the antenna flagged with tinfoil. Even as a boy I felt the tensions and contradictions in the song. Ford's voice, for one, is too rich and too clean to be a poor man's voice. And the lyrics seesaw back and forth between an honest awareness of working class life (“You load sixteen tons, what do you get? / Another day older and deeper in debt) and a twisted celebration of rural stereotypes and violent masculinity (“A mind that's a-weak and a back that's strong”; “If you see me comin', better step aside / A lotta men didn't, a lotta men died”). Ford's own life—he studied classical music at a conservatory but later adopted the hillbilly persona of “Tennessee Ernie”—attests to these same inconsistencies, and if you peruse the youtube comments on the video, well, you'll find plenty of tensions there, too.

Verl Newman, Wendell's father, whose journal entries make up the third narrative strand of the novel, embodies many of these same contradictions, just as much of rural America does. Yet Verl isn't static. While his journey begins in the cliches and destructive mythologies of the verses of “Sixteen Tons,” he slowly works his way towards the truer sentiments evidenced in the chorus.

In high school and college I pretty much turned my back on country music, listening instead to the likes of Nirvana, Dylan, and U2. So when I discovered Lucinda Williams, it felt like a kind of homecoming.

Beyond just being so damned achingly beautiful, Lucinda Williams's “Car Wheels on a Gravel Road” serves as an antidote to the cliches and pat narratives of “Sixteen Tons” and so much of what passes for country music these days. And the album Car Wheels on a Gravel Road, full of understated, closely observed songs of rural life and loss, is a whole world. That particularity, that fine-grained fidelity to real lives and landscapes—that was what I was after when I began writing Fall Back Down When I Die.

As it too often tends to do, a lot goes wrong in Fall Back Down When I Die. But there's a little bit of hope by the end as well. It's a hope that exists within a number of the characters, as they hew to their truest selves and the sustaining stories they've been told, and it's a hope that exists between characters, as they reach out to help one another.

Jeffrey Foucault's “Hurricane Lamp” and Jason Isbell's “Hope the High Road” are both addressed to someone particular, a “you” the speaker both takes hope from and hopes for. “I see you shine / Anywhere I am,” sings Foucault, “You've got a heart / Like a hurricane lamp.” For his part, Isbell nearly screams his hope: “But wherever you are / I hope the high road leads you home again / To a world you want to live in.”

Jeffrey Foucault and Jason Isbell are two of the saddest, most hopeful singers out there.

It doesn't get much better than Martha Scanlan's “The Shape of Things Gone Missing, the Shape of Things to Come.” I mean, it's all here: horses, blooming hillsides, sunrise. That insistent acoustic guitar, the rivery lift of the fiddle, Scanlan's delicately powerful voice. So much has gone missing, but, still, we might shape what's to come.

Joe Wilkins and Fall Back Down When I Die links: