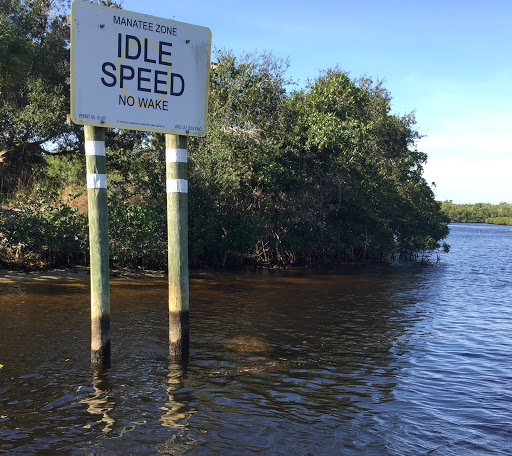 If I were not on vacation, I'd be sitting at my desk at work right now, counting the minutes until 5 p.m. Instead, I am very thankful to be sitting outside with a view of palm trees and blue sky. I'm soaking up every bit of warmth and sun I can get!

Today is what I'm viewing as our penultimate day of vacation (we fly home early Saturday afternoon, but my father is a bit neurotic about leaving early, so that means we'll likely be leaving for the airport right after breakfast). We've been taking this vacation for a number of years, but as Rainbow has been fairly young for most of those years, our activities have mainly been limited to relaxing by the pool, going to the beach, going out to eat, and shopping. Today, however, we decided to do something completely different. We drove about 30 miles away to a marina and took a boat tour to see manatees, among other exotic wildlife. 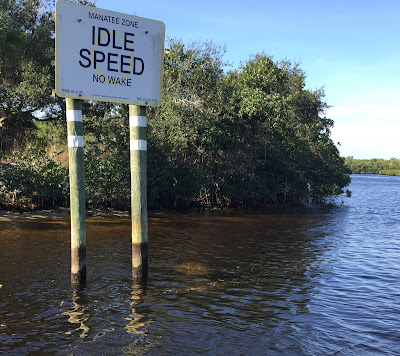 It's very hard to see, but that lighter brownish blob just to the right of the pylons? That's a manatee! It was one of several we saw, including a mama manatee and her baby. This one was enjoying all the yellow leaves from the mangrove trees that had fallen on the surface of the water. The water in this spot was shallow enough that we could see it pretty clearly and watch it "crawl" along the bottom with its flippers.

We also saw quite a few alligators along the sides of the waterway, though we didn't get so close. 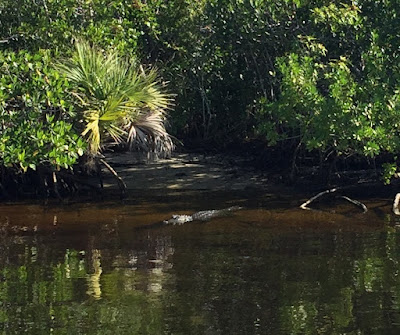 This guy seemed to be enjoying the sunshine.

We don't have to travel far to see some other wildlife, though. I've been running or taking long walks (like 6+ miles!) almost every day, and in addition to seeing lots of birds like herons and egrets and ducks on or near the water features in the development and tons of little lizards sunning themselves on the sidewalks, I also spotted this guy as I was nearly back to the house the other day: 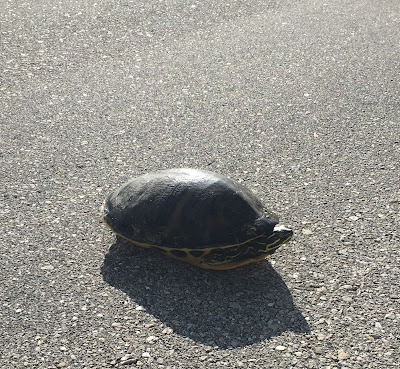 I was a bit worried he was going to get himself run over, but as you can see he was a bit scared by my being so close to him, so I didn't want to traumatize him more by lifting him up and carrying him the rest of the way to the grass. I decided he was close enough, and I didn't see any remnants of a squashed turtle the next day, so he must have been fine.

And now, if you'll excuse me, I'm going to take a break from the wild animals and go read a trashy book outside. Happy Thursday!
Source: paknitwit