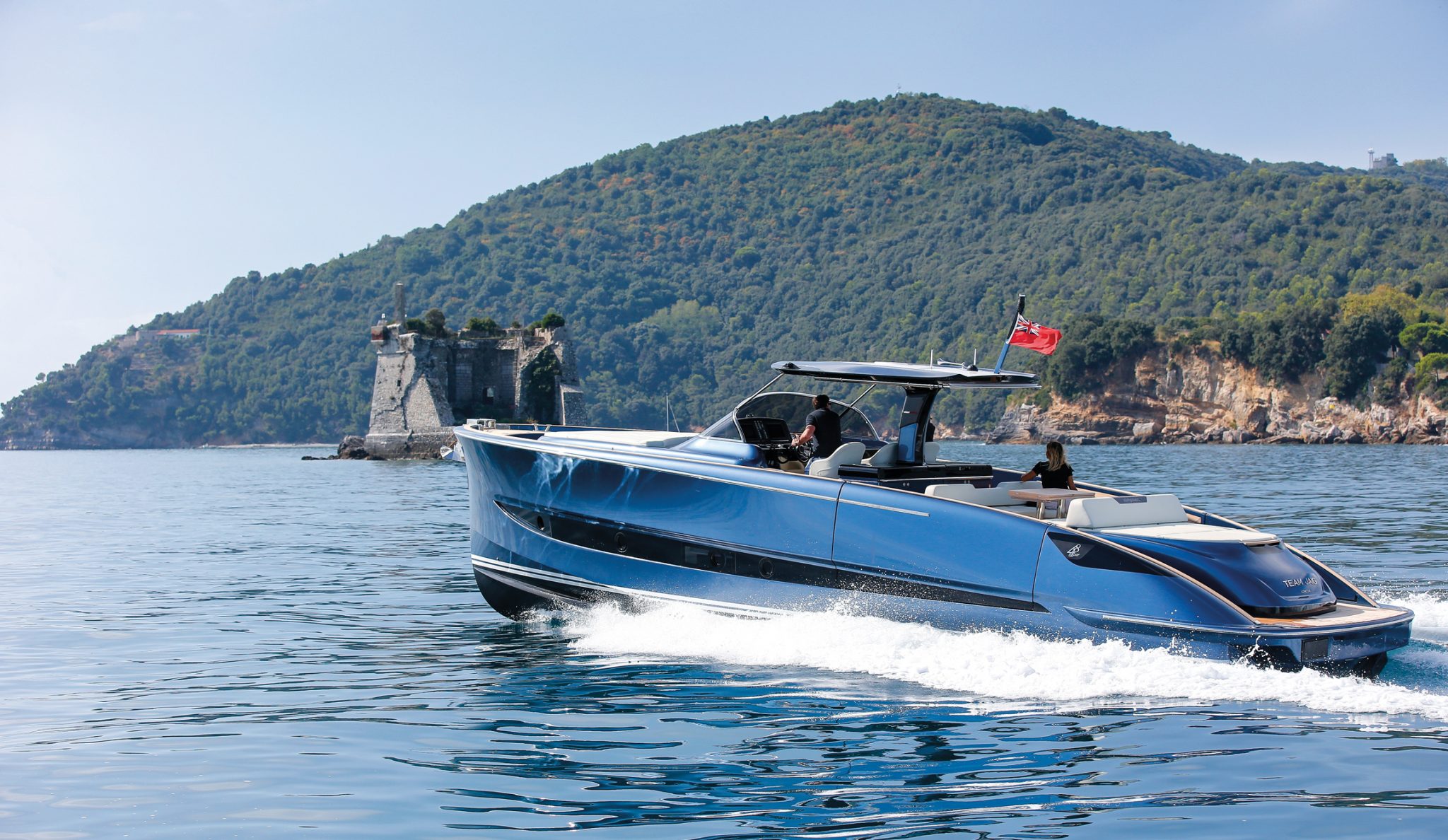 Solaris Power 48 Open review: The prettiest boat since the Aquariva?

With the stunning 48 Open, sailing boat brand Solaris has branched out into the world of motorboats. A risky move? Not with the might of Norberto Ferretti behind it. Jack Haines takes a test drive...

When the first boat started hitting the boat show circuit in a sort of metallic aquamarine hull paint it stood out in all the right ways but even in the more reserved blue of the boat we tested it’s a beautiful thing to behold.

It’s one of those boats where the closer you look the more mouthwatering the details you pick up. For example, the concave moulding work down the sides of the coachroof and the elegant slope of the tender garage, which calls to mind the tail end of a vintage Porsche speedster.

The delicate stainless steel windscreen surround and the design of the T-top, with its substantial central stem which spreads out like a toadstool into the roof section.

Then there’s the hull, a feast of beautiful swooping shapes with a gentle reverse sheer at the bow that peels into a pronounced flair and tapers deliciously towards the waterline at the stern.

Where the Solaris’s direct rivals from Fjord, Pardo and Wally employ sharp creases and clean lines the 48 Open is softer and more curvaceous in stature with retro touch points that hark back to the lake boats that its country of origin is so adept at producing. 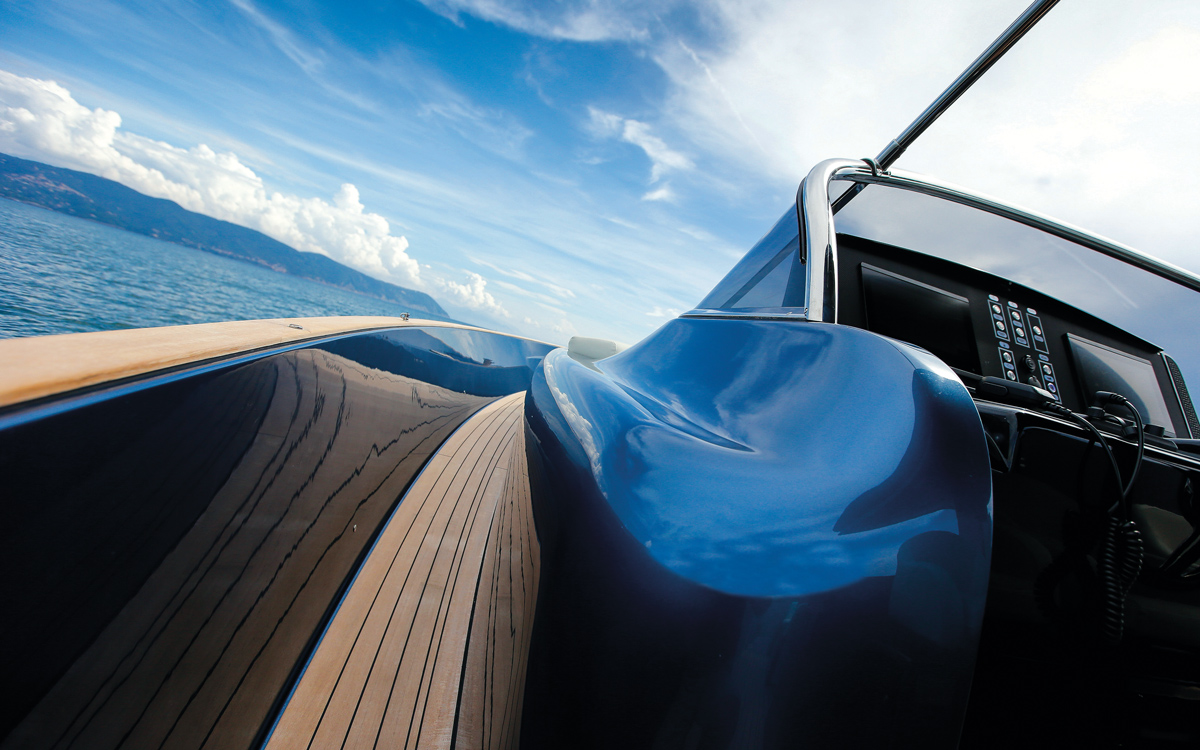 Solaris may be new to the motorboat game but it entered into this new venture with the help of a man who knows a thing or two about what it takes to build a good boat.

Norberto Ferretti needs no introduction and it is he, along with Brunello Acampora of Victory Design, that give the Solaris Power 48 authenticity, that help give credence to the fact that this is more than a well respected yacht manufacturer having a go at something a bit different.

Mr. Ferretti was on board from the start and his eye for detail and solid engineering is on show all over this boat. 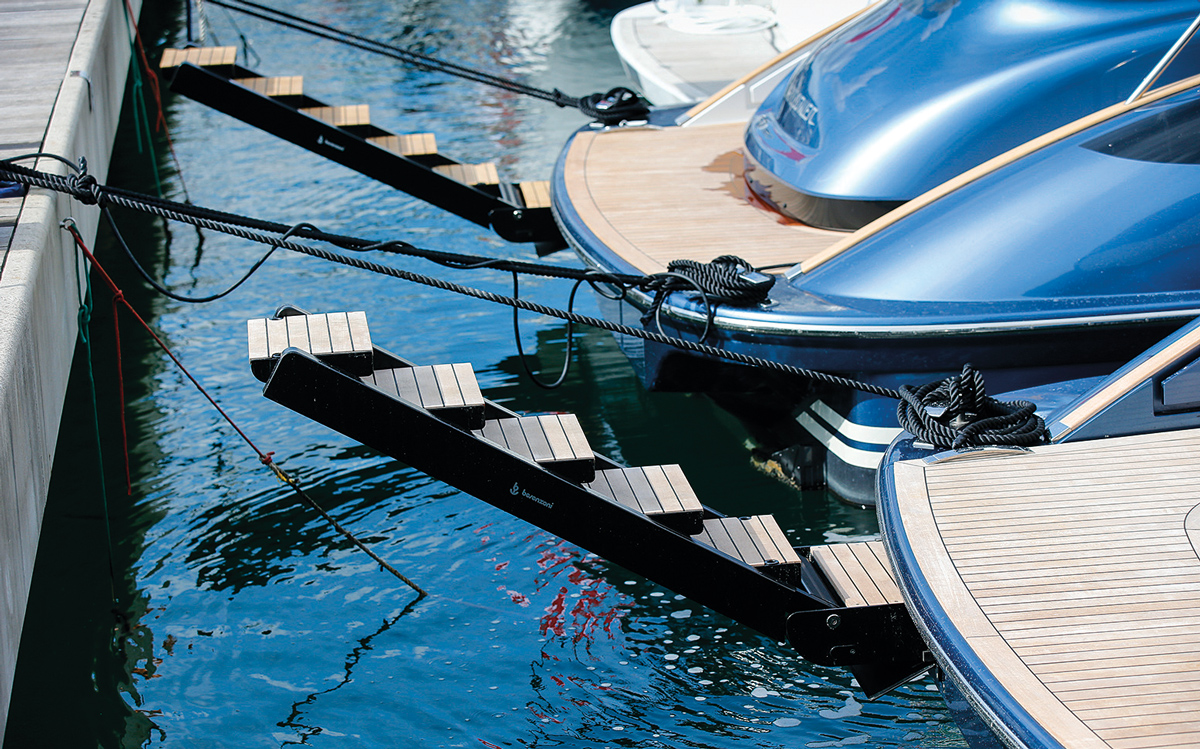 The casual observer might say that the Solaris is identical in purpose to its key rivals, and in many ways it is, but there are some features that set the boat apart from the likes of the Fjord 48 and Wallytender.

It doesn’t have a hydraulic bathing platform but beneath the curved aft sun pad moulding there is space to stow a 2.5m tender and a storage slot and charging point for a Seabob. A notable addition is the ladder gangway, which acts as both passerelle when the boat is at the quayside and stairway into the water when it’s at anchor.

That’s not the end of the transformer style toys on the main deck because the 48 Power comes with folding cockpit balconies as standard that stretch the boat’s already generous 15ft 10in (4.87m) beam even further when it’s at rest. 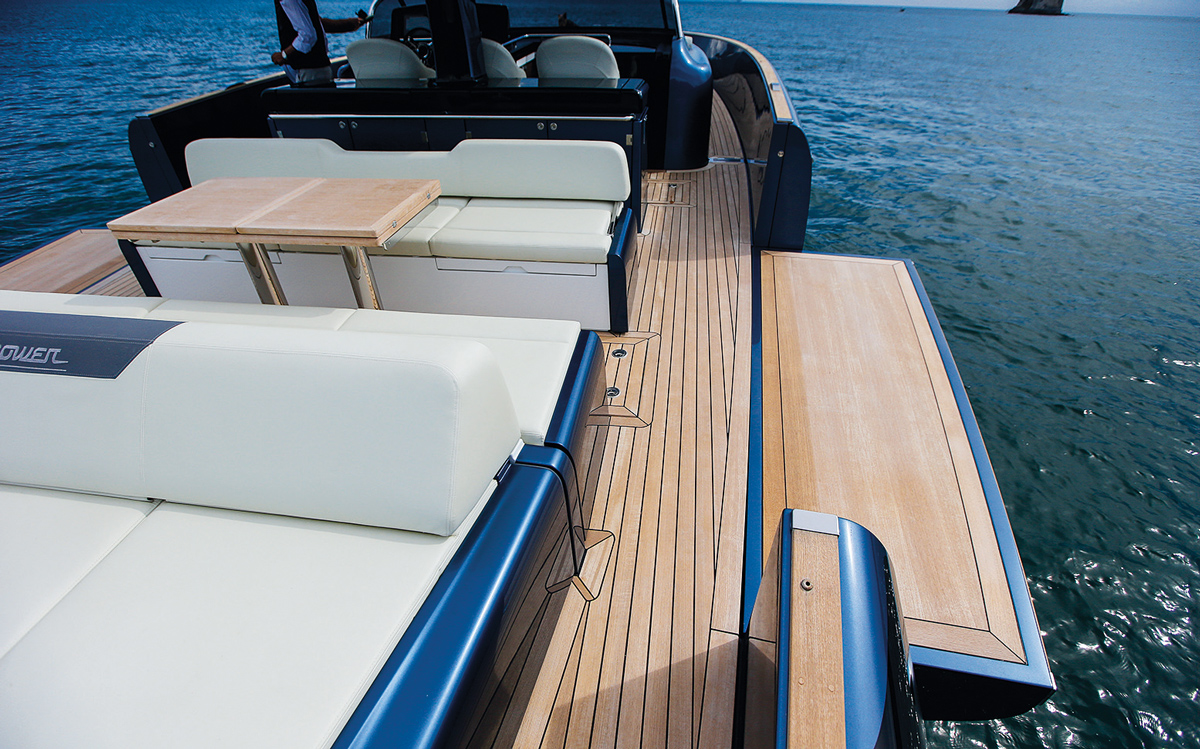 Folding balconies come as standard on the Solaris Power 48

These, the gangway and the electric bimini which pops out of the aft end of the T-top transform the boat at a push of a few buttons and turn what is an alluring cockpit as is into one that wants for nothing when it comes to the important business of long, lazy afternoon swinging off the hook.

A broad spread of opposing seating with a table that opens out to double in size allows guests to wander between sunbathing and dining and the wide wet-bar, within which the base of the T-top is mounted, kitted out with a cooktop, ice maker, sink and fridge as one would expect.

When the boat’s on the move, it’s handy that the backrest on the forward dinette bench flips the other way so that guests can sit facing forward with some protection from the breeze on offer from the wet bar moulding. 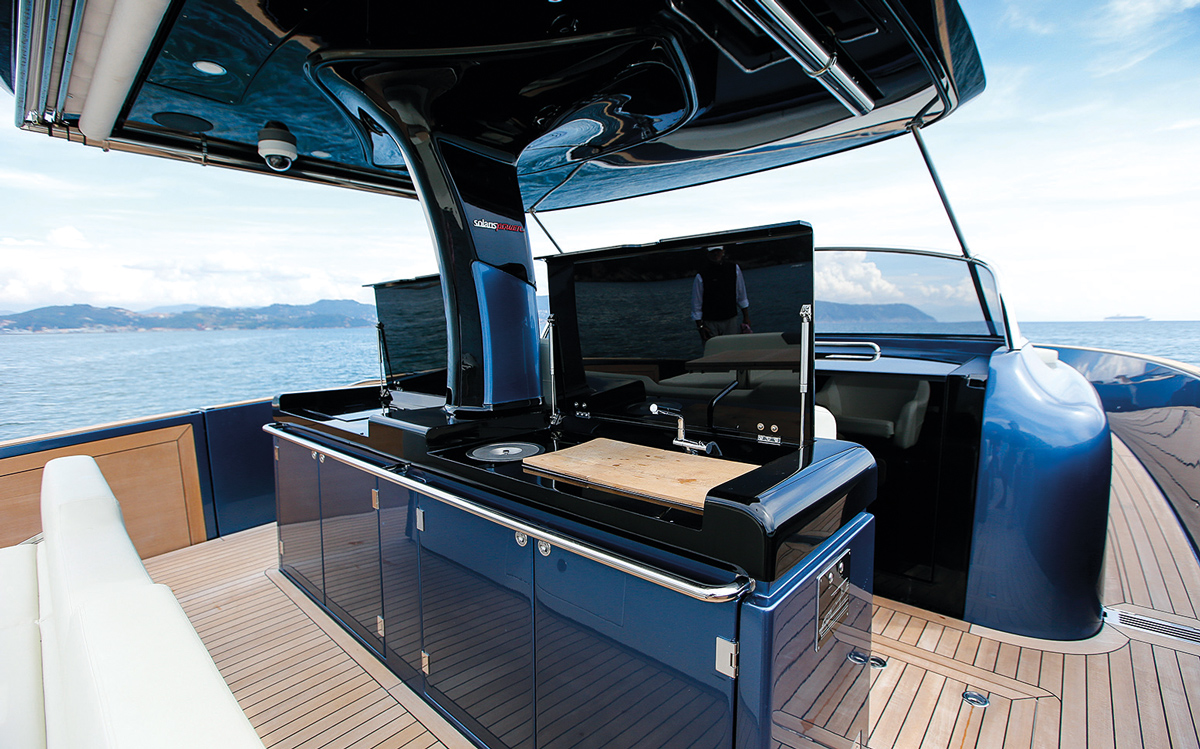 The T-top strut is neatly mounted within the wetbar

It’s an easy boat to move around and it feels safe despite the notable lack of guardrails. There are no steps in the deck until you get to the transom, moving forward it angles up gently as you head towards the bow meaning you can move around safely in the knowledge that you’re not going to catch a toe on an obstruction.

No guardrails raises the question of how you hang fenders and the answer is with push-in deck plugs to which you can tie individual fenders. There’s no two ways about it, as neat as it is it’s not as simple a process as lashing your fenders to a guard rail and I wonder how easy it is to get a replacement plug if one finds its way into the drink.

Practicality is an area where the Solaris loses ground to the Fjord in particular. The Fjord’s deck storage, integrated grab rails and bespoke flat fenders with dedicated recesses in the topsides make it an easier boat to live with day-to-day but the but Italian boat isn’t all form over function. 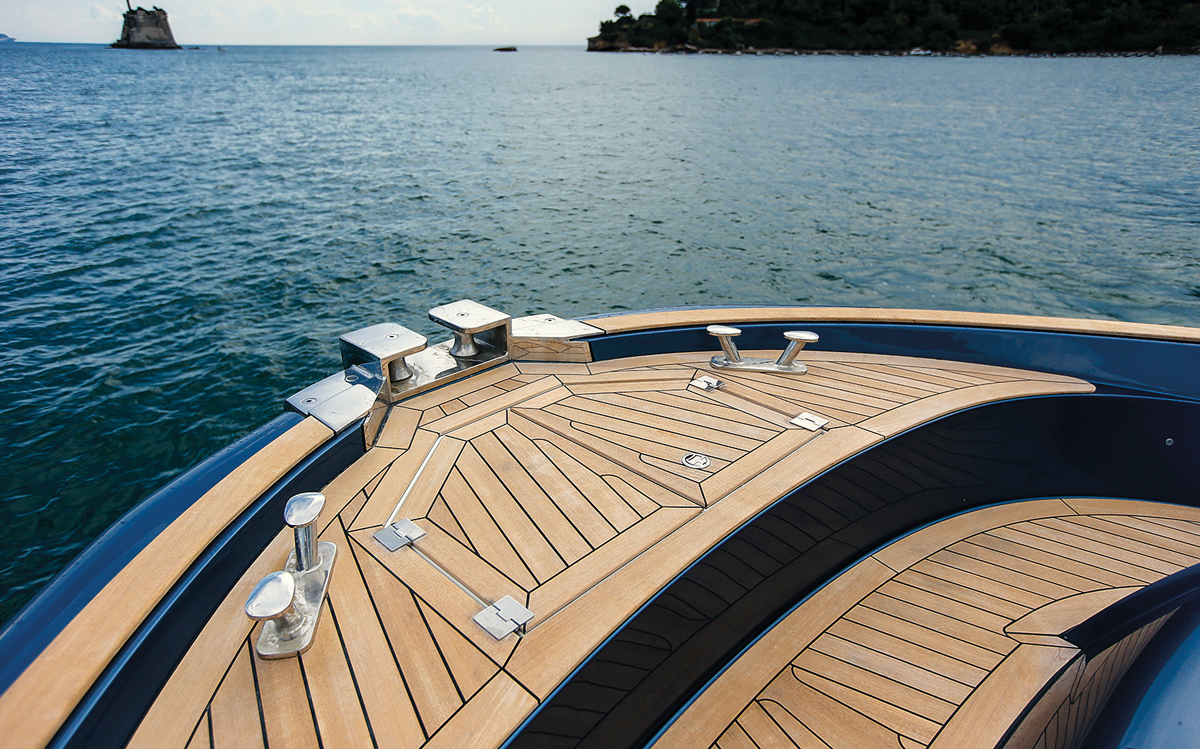 The detailing on deck is exquisite

The anchor locker is a good example, with twin hatches that spring open on beefy gas struts, a connection for freshwater wash down and enough space within to swallow all of the boat’s fenders.

Another area where the Solaris takes a different path to the competition is below decks where many boats of this style have an open plan arrangement. Not the case here, where the designers have made the assumption that on a boat of this style the reason you’re going to be on the lower deck is to wash and sleep and they probably have a point.

This genre of boat are fair weather beasts and make so much sense when the sun is beating down on their sunpad ridden decks. It stands to reason that as much time as possible will be spent on deck on hot days and balmy evenings so why not dedicate the lower deck to sleeping accommodation. 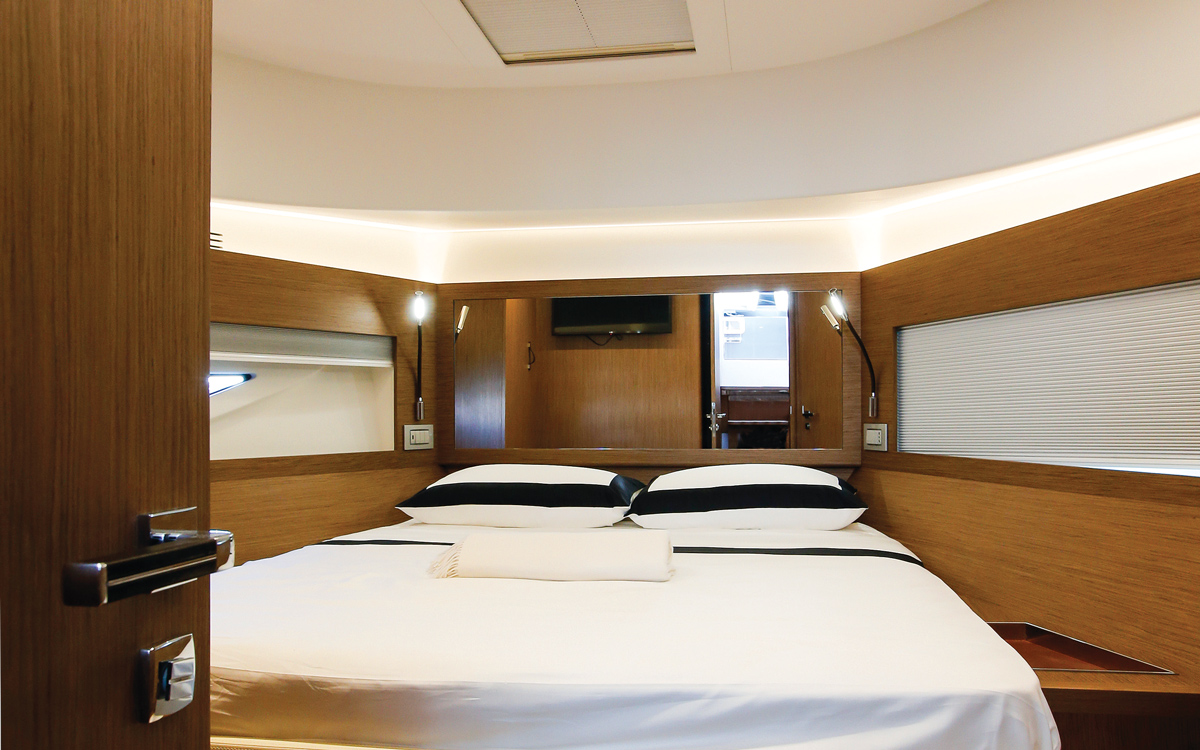 There is a version of the Solaris Power 48 with a dinette down below but the configuration of our test boat, with two good cabins and two bathrooms, seemed a sensible use of space. There is a third cabin, accessed awkwardly either through a hatch in the deck or an uncomfortably tight gap unveiled by lifting up the companionway steps.

It would be borderline cruel to ask a child to sleep in there, nevermind an adult, so most will probably just use it as a large storage void, a job to which it is well suited. The other cabins are far better, nicely appointed and spacious with sufficient natural light and enough hanging and drawer storage to stow clothing and luggage for longer stints away.

The benefit of not trying to cram a dinette or galley on to this deck is that the cabins get a much better proportion of the available space and so do the bathrooms. The fact that each cabin has its own is a luxury but the size of the master ensuite especially comes as a pleasant surprise, with plenty of headroom for those over 6ft, even inside the shower cubicle. 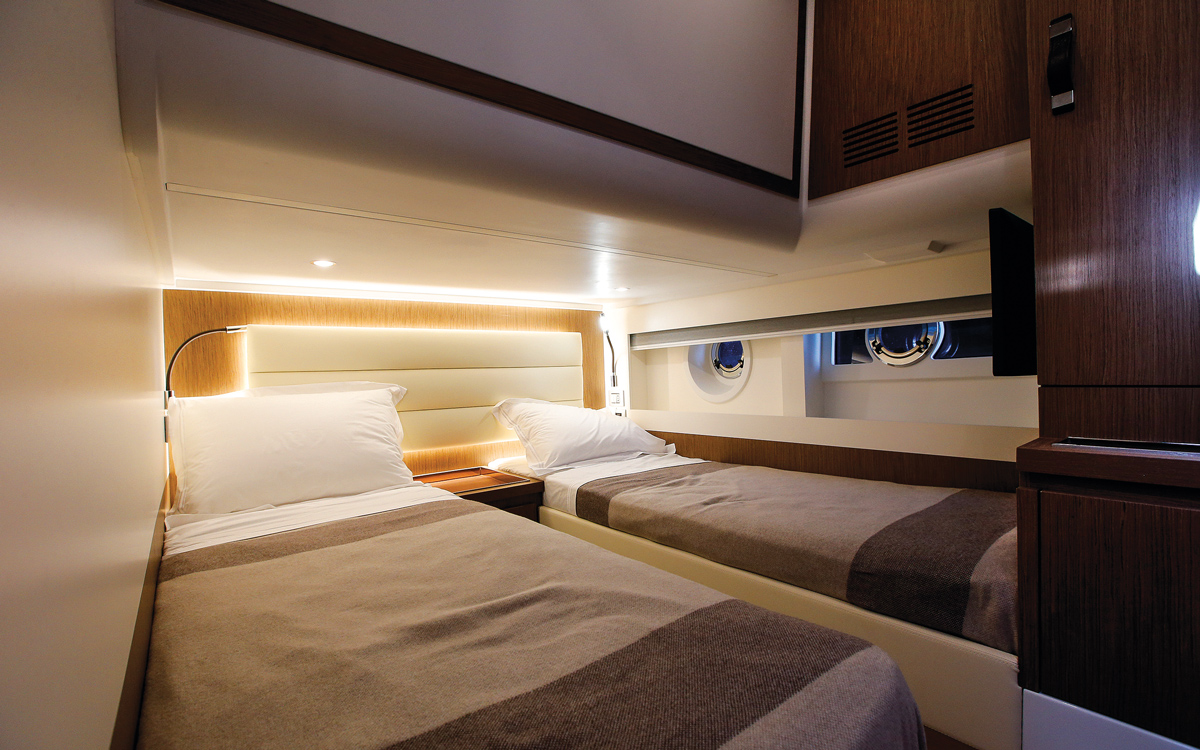 Headroom is surprisingly good in the guest cabin

The lobby area forward of the companionway does feel a bit stuffy but I think most would agree that the space is better used in the cabins and their bathrooms than here.

The boat’s glorious hull shape is about more than looking good as it peels across the water. Its sharp entry and shallower aft sections were designed with IPS in mind and a silky smooth transition to planing.

The pedigree of the people behind the boat once again comes to the fore because in the pursuit of sweet weight distribution the pods are connected to their twin 480hp Volvo Penta D6 motors by jackshafts, the engines’ position slightly further forward ensuring that the bow doesn’t rocket skywards the moment the throttles are buried. 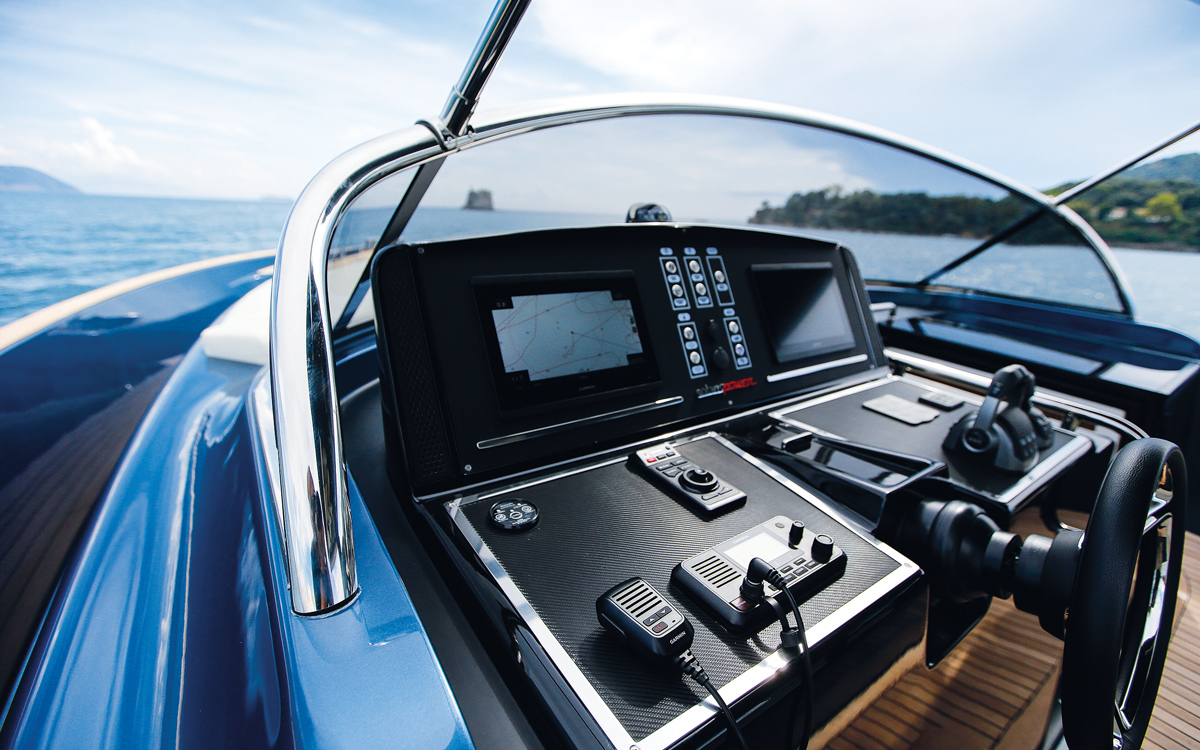 The windscreen is pure classic sportscar

The numbers paint a clear picture that the Solaris is not about straight line speed or chasing down the likes of Windy when it comes to performance. The top speed is a healthy if not heart pumping 32 knots but it’s the cruising sweet spot of around 25 knots where the boat really gets into the groove.

A few knots either side don’t make a huge amount of difference to the ride or fuel economy but the most remarkable thing is just how level the boat’s running attitude is at all speeds. It’s a wonderfully relaxed and serene way of making progress on the water.

The steering has more weight to it than might be expected of fly-by-wire IPS but it still feels a little numb and the initial keenness to heel into turns is soon flattened out, widening the turning circle somewhat. It’s a rewarding boat to pilot, though, as it wafts gracefully towards its destination. 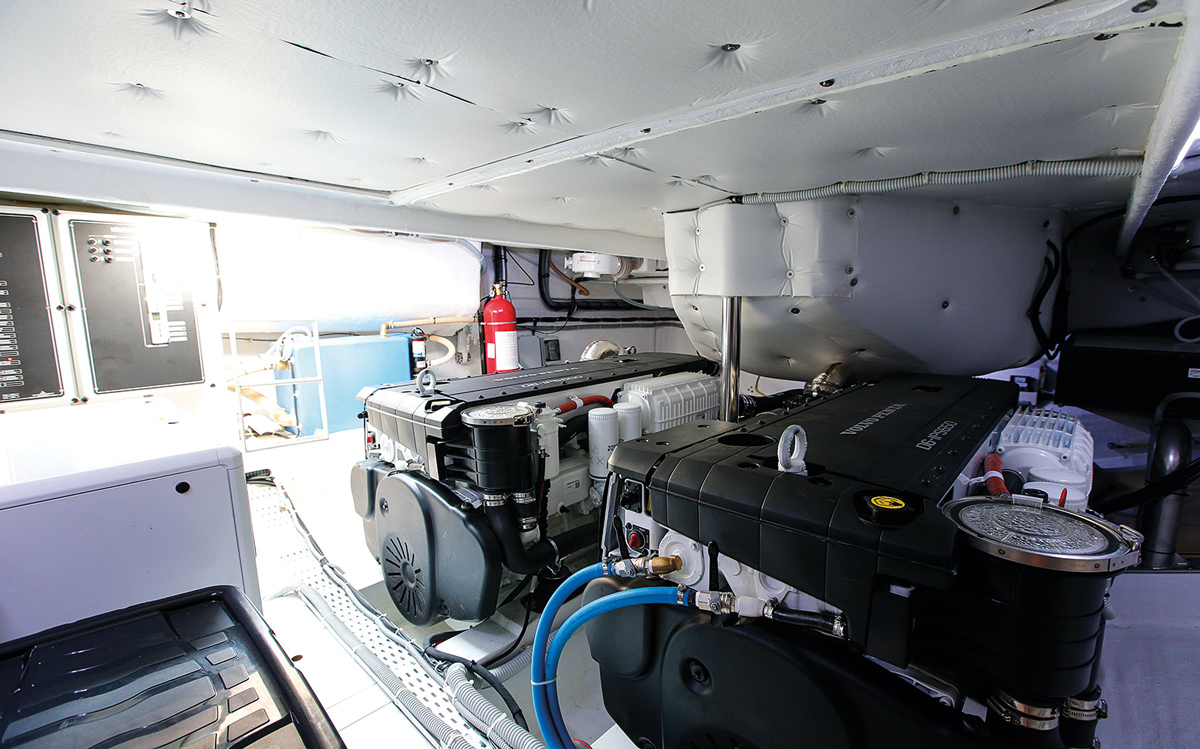 Engine access is via a hatch in the cockpit

It was during a test of the 670 that a senior Ferretti engineer, to my question about the lack of adjustment at the boat’s helm stations, responded that “Mr Ferretti believes you should stand to drive a boat.”

Well, Mr Ferretti has clearly softened since then because though the Solaris’s helm is very well arranged for standing while you helm, with an adjustable wheel and a sliding bucket seat with bolster function it’s also very easy to get comfortable in the seated position, too. The same can be said for the other two seats at the helm, which allow a couple of guests to join the skipper for the ride and enjoy some protection from the shallow windscreen.

The dashboard is clearly laid out and attractively designed but there are few too many controls mounted flat on the dash, which are hard to see unless you’re looming right over them. There’s also a lack of places to stow loose items and not even a cup holder to keep your can of Sanpellegrino in place. There is a perfectly placed smartphone slot on top of the steering wheel base but it would be even more useful if it held the phone in place securely and – better still – charged it. 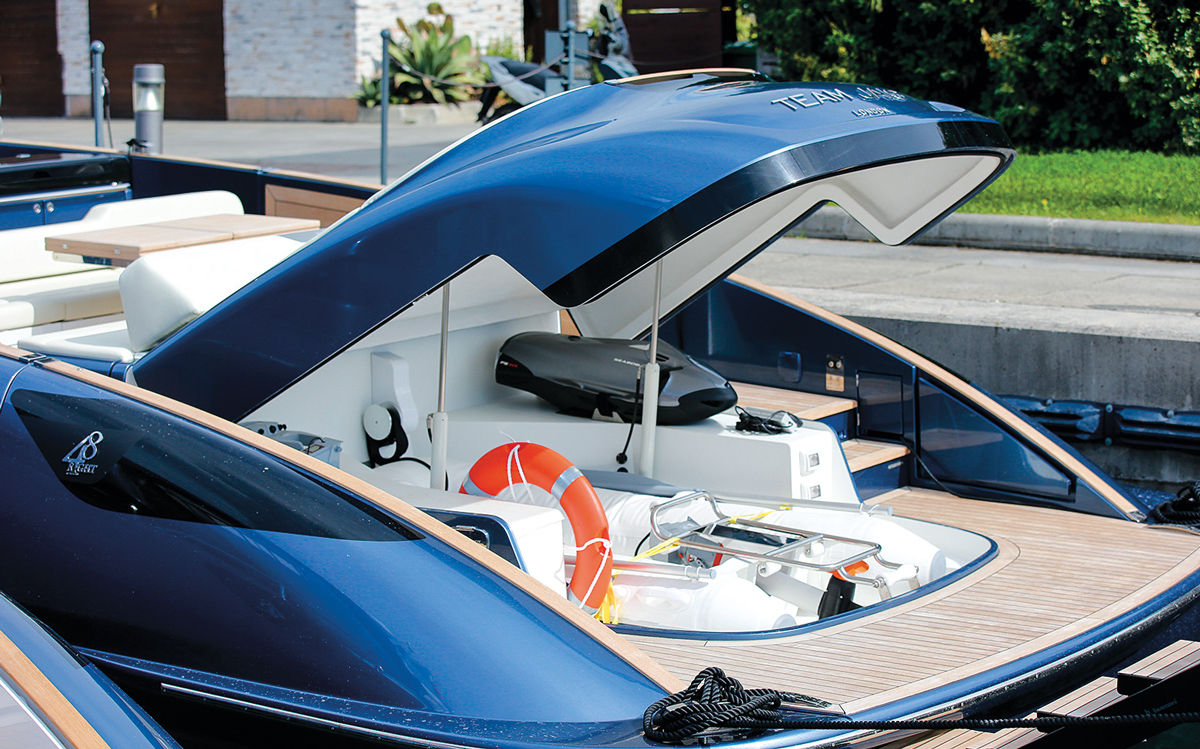 Though the 48 Open is battling it out in a sector that is having a real boom at the moment it does enough to stand out from the crowd. You may say that over €1 million with VAT for a boat of this style is a lot of money but in its defence it does come with an extremely healthy standard spec, as you can see from the limited number of cost options fitted to the test boat.

What’s more, in developing the 48 Solaris included two other versions, a 48 Lobster with an enclosed wheelhouse and a flybridge iteration built on the same platform. This was a smart move and means customers can have the style and dynamics of the open in an altogether more weatherproof package.

Yet I suspect that as with most boats of this type it’s the fully open version that makes the most sense and really allows the design to shine. Solaris may have gone out on a limb challenging such well established players but it did so – with the involvement of Norberto Ferretti – with over 50 years of motorboat production in its back pocket and has created something that lives up to the expectations raised by the way it looks.

First published in the March 2021 issue of Motor Boat & Yachting.

Solaris Power 48 Open review: The prettiest boat since the Aquariva?