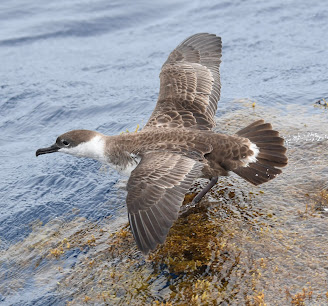 Wind was present for us this past Friday and Saturday...perhaps a bit more so on Saturday when we had to shorten our time in the deep to make it back inshore before it really started howling!  We thought we saw shearwaters on our last set of trips??  We blew those counts away on Friday!  There were shearwaters flying a few miles past the shelf break.  Cory's types and Greats, we ended up with the latter taking the day almost 2:1.  Nothing like we saw over twenty years ago, but some nice numbers of shearwaters compared to our recent history!  Many of the birds we saw were moving by in a steady flight, but around 1030 we found a feeding flock with over 30 Sooty Terns above!  Many of these were sleek youngsters begging as they flew around behind their parents and also super curious about us! (Kate Sutherland) 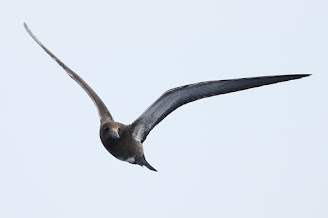 I even saw one land on the water to be fed by an adult, taking off a moment later, not something I've ever seen before!

Black-capped Petrels, our winged runners of the Gulf Stream, were in their element on both days and responded well to the chum!  Especially some of the juvenile birds that were around!  We had nice views of adults who had completed their molt and then the juvies, who had fresh and gorgeous pale edged feathers on their mantle!  Not to mention that wide-eyed look of youth. (Kate Sutherland) 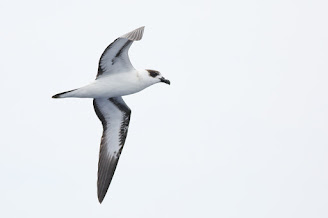 As hard as we tried, we didn't turn up any other gadfly petrels, but we did see both light and dark faced types, plus many intermediates, in our Black-cappeds over the two days out there.
Friday's trip turned up two species that were unexpected and much appreciated!  First thing in the morning participant Basko Eszeki spotted a large, dark bird in the wake of a ship we had just passed astern.  I didn't get on it right away, but it turned out to be a Brown Booby!  It flew off to the south as we continued offshore, frustrated that we didn't have the best views.  Just after slowing down as we passed the shelf break, and as I was beginning to dispense the chum, another Brown Booby flew by!  I didn't get an eye on this one, but it also looked to be an immature individual, same as the first?  Who knows, it would have had to make a horseshoe turn and come back to us...so possible, but without photos of both, no way to tell!  Later in the afternoon we had an adult buzz by the boat fairly close on the starboard side, that one I did get to see and even snapped a few record photos! 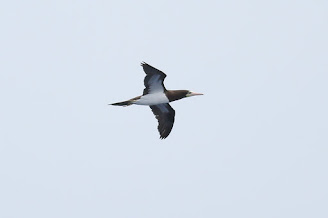 Even later than that, in the 1400 period, participant Frank Hawkins spotted a jaeger flying toward us.  It was a Pomarine that was pursued by a Black-capped Petrel...then a South Polar Skua showed up!  What a show!  Though I wish it were a bit closer so we could have captured it in more detail...but who was chasing whom??  The Black-capped pursued both the skua and the jaeger, then they turned back on the petrel - at one point the skua was "yelling" down at the petrel while the jaeger observed from above!  There was a lot of back and forth, but you get the picture!  Pretty exciting way to end the day on Friday!!  In addition to these skuas, we had another pair of immature jaegers earlier in the day: a Pomarine chasing Audubon's and a Long-tailed chasing some Sooty Terns (Kate Sutherland).  Overall, quite a bit of excitement! 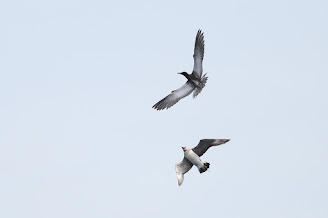 Saturday we didn't find the same high numbers of shearwaters offshore, but we did have excellent views of both Cory's and Scopoli's Shearwaters close to the boat and some cooperative Great Shearwaters in the slick!  Audubon's were not as easy to see, but we had our first Manx Shearwater of the season, sitting on the water with a flock of Great's and Cory's types!  It was very worn, so looked quite brown, perhaps a one year old bird.  We had great views of it on the water and in flight!  What a treat!  In addition to these expected shearwaters Brian spotted what he described as a "pygmy Cory's" just after 0930 in the morning.  The bird seemed to have flushed from a flock in the glare and flew across the bow and directly away from us, low on the water.  When I glassed the bird I saw it had dark under primaries and the size was closer to a small Scopoli's than a Cory's.  I did my best to get a few photos as it flew by, as did leader Ed Corey. 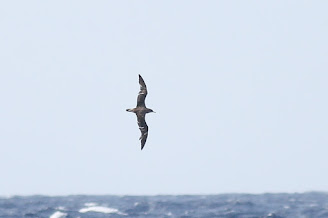 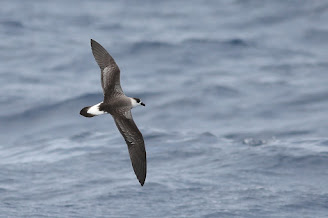 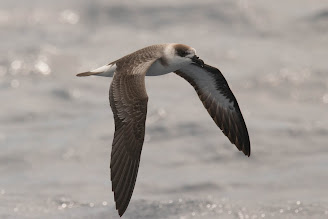 And we had some fresh looking adult birds (Kate Sutherland) 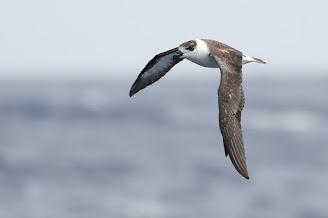 What looks like two pale faced birds, the one showing the underwings is one for certain!  Look at that fine (vs. thick) black line in each underwing! (Kate Sutherland) 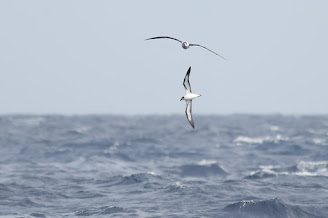 We had some decent photo ops for Atlantic Cory's (haha!! They were actually pretty good!) Jacob Farmer 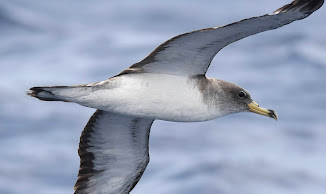 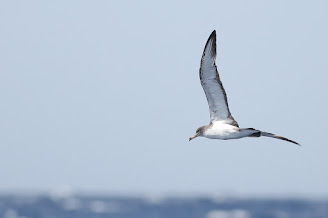 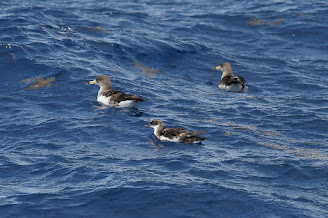 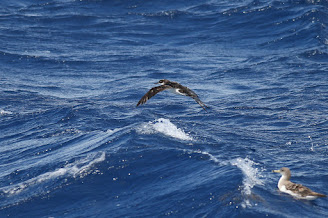 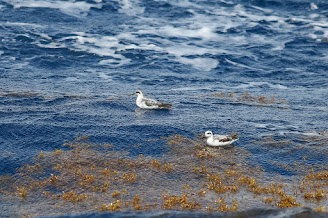 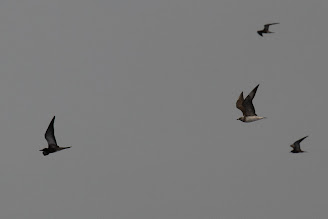 One of the Bridled Terns we found over the two days! (Ed Corey) 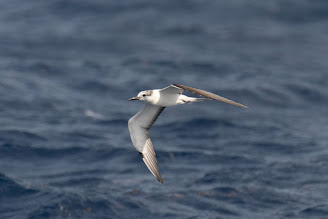 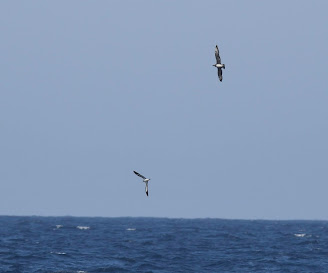 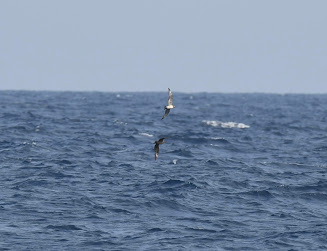 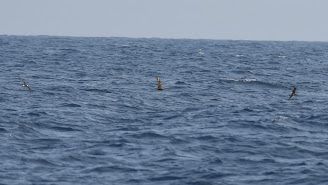