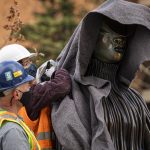 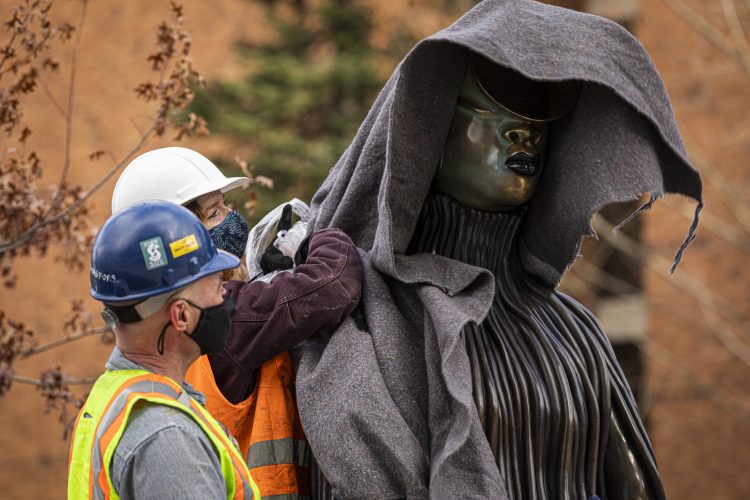 At nearly 7 feet tall, “The Seated IV” first graced the Metropolitan Museum of Art’s facade in September 2019 as part of a commission titled The NewOnes, will free Us. Four “Seated” sculptures by Wangechi Mutu were the first works to take up the positions on The Met’s facade since it was completed in 1902.

On Monday, Jan. 25, one of the four storied bronze sculptures was installed at the north side of the new Hans Rosling Center for Population Health at the corner of W Stevens Way and 15th Ave NE. 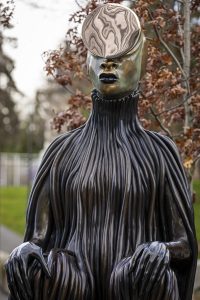 The Seated IV installed on the UW campus at the Hans Rosling Center for Population Health. (Click for larger view.)Mark Stone/University of Washington

“Wangechi Mutu’s The Seated IV is an extraordinary addition to the UW art collection, and more importantly, to the campus experience,” said Shamim Momin, Director of Curatorial Affairs at the Henry Art Gallery. “The majestic, powerful, female figure seated in strength and presence may reference the traditional caryatid form, but the artist has removed her from the onus of ‘carrying the weight,’ as she says, speaking to the literal holding up of the architectural structure that caryatids typically enacted, as well as the metaphorical responsibilities of women.

“She is here seated, her pose and aesthetic modeling synthesizes African sculptural traditions with Western approaches, creating a new figure — holding the historical gravitas in her form, but in command of and not subject to it. The circular mirrored form atop her forehead offers a kind of ‘third eye,’ reflecting our gazes back at one another, or perhaps offering a portal to a new way of seeing. I’ve passed her only twice now as I walked on campus, and she is already an inspiration, a comfort, a presence felt.”

The university will invest approximately $1.1 million in artwork for the building, roughly split at about $85,000 from public funds and the remainder from private donors.

Wangechi Mutu is an artist based in New York and Nairobi whose collage-painting, sculpture, film, and performances often use composite female forms to explore gender, race, and art history.

The Seated IV (2019) is one of four free-standing seated female bronze sculptures (The Seated I, II, III, and IV) commissioned by the Metropolitan Museum of Art (Met) to fill the niches of its façade. Included in the 2019 – 2020 exhibition The New Ones, will free Us, this regal figure, references different aesthetic traditions, resembling a futuristic sage, inspired by caryatids from classical African and European traditions. She is positioned as a dignified leader, free from responsibility of supporting the weight of history or even the world. When developing the work, Mutu used past drawings from her sketchbooks and also studied the African and Oceanic collections in the Met. She was interested in female caryatids, a Congolese “royal stool” made with a kneeling female figure who symbolically carried the King, as well as a Yoruba stool that featured a standing woman whose head supported a man on horseback.

Artist statement about The Seated series as told to The Met:

Caryatids, throughout history, have carried these buildings to express the might and the wealth of a particular place. In Greek architecture, you see these women in their beautiful robes, and then in African sculpture across the continent you see these women either kneeling or sitting, sometimes holding a child, as well as holding up the seat of the king. It felt like this was a very ubiquitous position for women across many, many histories. How do I use this figure to change this conversation and this issue? 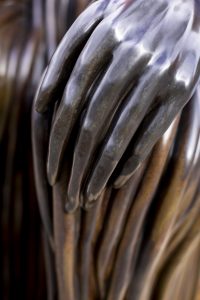 I wanted to keep the DNA of the woman in an active pose, but I didn’t want her to carry the weight of something or someone else. The process of taking it from drawing into 3D has been quite epic. Once these molds had been produced in a much larger scale, I really worked hard to individualize everything that really expresses humanity to us. After they had been cast in bronze, I went in to work on the patinas. And that’s when I was going to have to go in and paint them in fire and really make them alive. . . .

I wanted these things to be about how form and material actually impacts us. I created these coils that I’ve put all the way around their bodies that felt tactile and living and fleshy, but at the same time really protected the women and gave them kind of a privacy and a regal nature. They became almost like soldiers, like they were in armor. And the circular form actually comes from traditional African adornment: Ethiopian, Sudanese tribes that have these incredible lip plates. They’re mostly worn by women of status. I’ve turned them into mirrors. They’re able to take light and twist it around; they’re able to flash at you from a distance.

Women’s bodies are always at the front of so much of the expression, the hostility, the magnificence of how humankind sees itself. I think of these women as characters that have the capacity, the freedom, and the opportunity to be where they need to be, to say what they have to say. They’re here, and they’re present, and they’ve arrived.

Wangechi Mutu discusses making and meaning of The Seated sculptures: