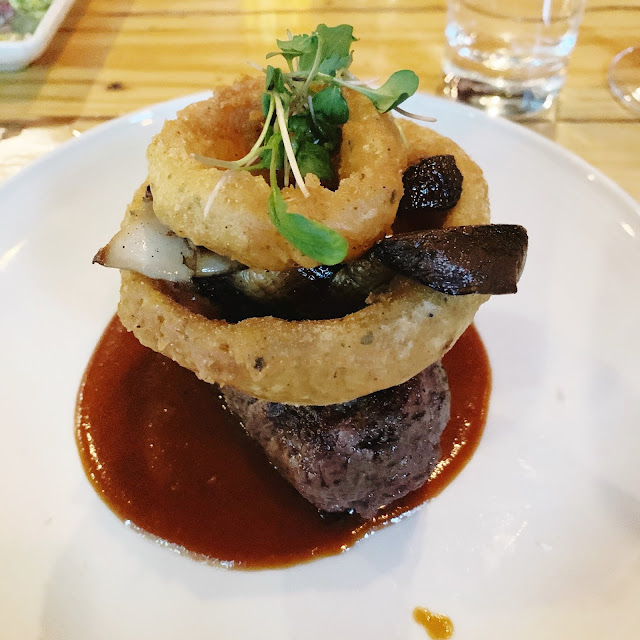 I was going to give this post a title of just "Minneapolis"... until I looked at my photos and realized it was pretty much a bunch of pics of meat that I ate.  I hadn't been back since 2014, other than the airport for connections, and I had the chance to return for another work trip to our Minneapolis office.  I was joined by coworkers who lean to the carnivorous side of life (as I sometimes do!) and we definitely indulged.

But first, a photo of some art because it was outside our super cool hotel, the Emery.  I wish I'd taken more photos inside, because the lobby was so unique (so many plants!) and the rooms were quirky too. 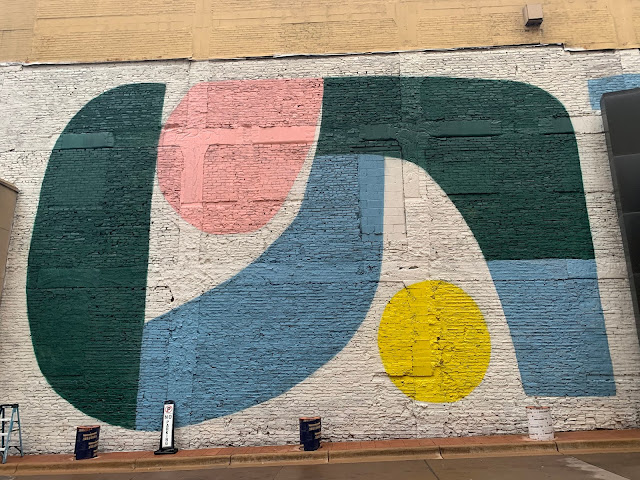 For dinner the first night we were in town, a group of us headed to Manny's a classic steakhouse and Minneapolis meat institution since the '80s.  It's often in the "top steakhouses" lists nationally, and they bring out this rolling cart of meat to describe the cuts and help you make decisions.  I've been fortunate during my travels to experience a lot of great steakhouse, so I was excited to visit Manny's.  I couldn't resist taking a photo of the artwork in the waiting area of the restaurant, which is pretty, um, ballsy.  LOL. 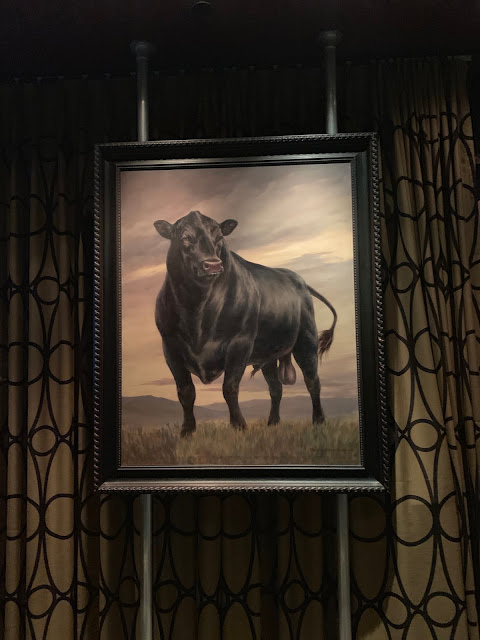 The side at Manny's are shareable, and we got the giant hash browns with onions and the macaroni and cheese.  I loved the macaroni, but I wished the hash browns were crispier.  It's such a thick patty, the insides don't get crispy, so I think if they did two thinner layers it would be better.  But they're doing fine without my input, so I'll let it be! 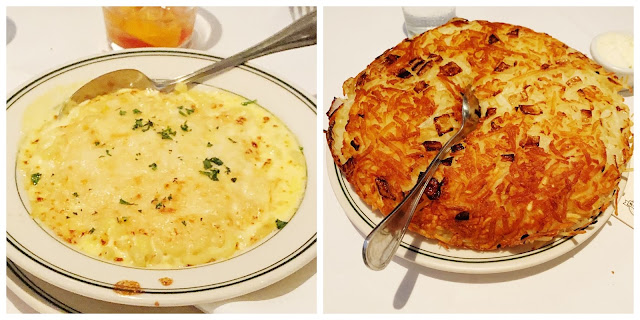 For steak, I got the filet though I considered the baseball steak because that sounded good too.  It was a really good steak, as you would expect.  Not the greatest steak I've had in my life, but a great steakhouse experience for sure. 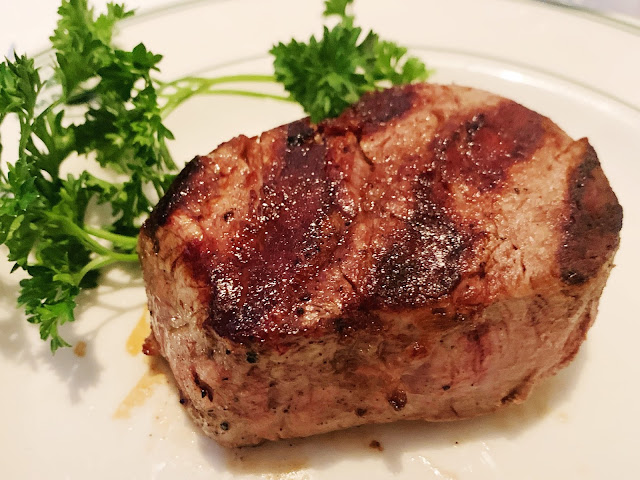 The server was outstanding, and he threw in a crazy dessert for us to try.  It was huge, and it had a steak knife running through it! 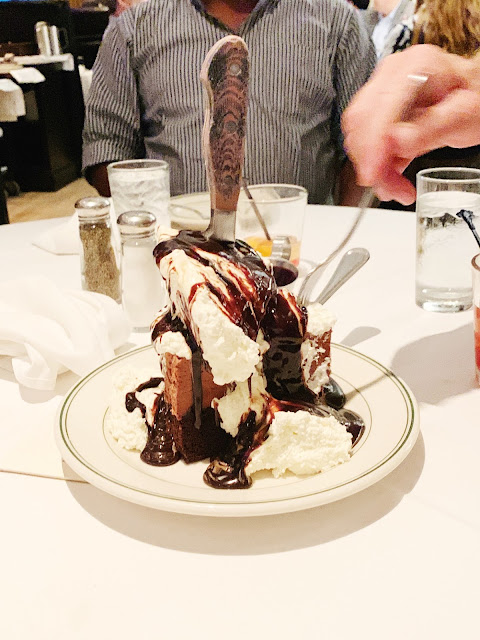 The next night, our larger group went to another downtown restaurant known for its meats, Butcher & the Boar.  We ordered a smorgasbord of things (including charcuterie and the sausage sampler), and they were all delicious!  The restaurant has a hipster beer garden vibe in all the right ways, and I thought the food was really great.  I preferred it to the more traditional experience at Manny's the previous night. 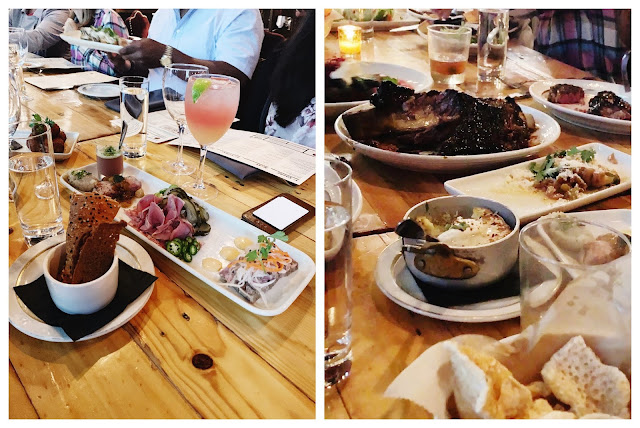 For my main, I was going to order the sausage sampler, but they ordered some for the table so I got to try those beforehand! 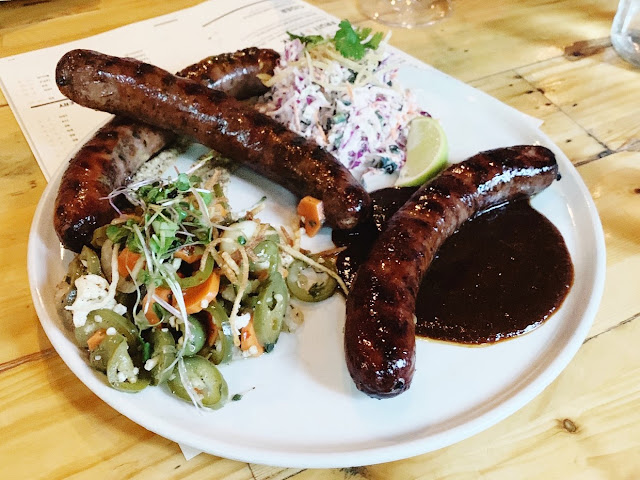 So I ordered a steak for dinner, again!  And it was another filet... topped with smoked onion rings.  It was really good, even better than the one I had the previous night.

So as you can see, pretty much the only photos I took in Minneapolis were of meat.  :)  It's a really cool city that I'd like to explore more someday, but sadly the weather wasn't the most conducive to that.  Maybe next trip!
Source: adventuresinaubreyland