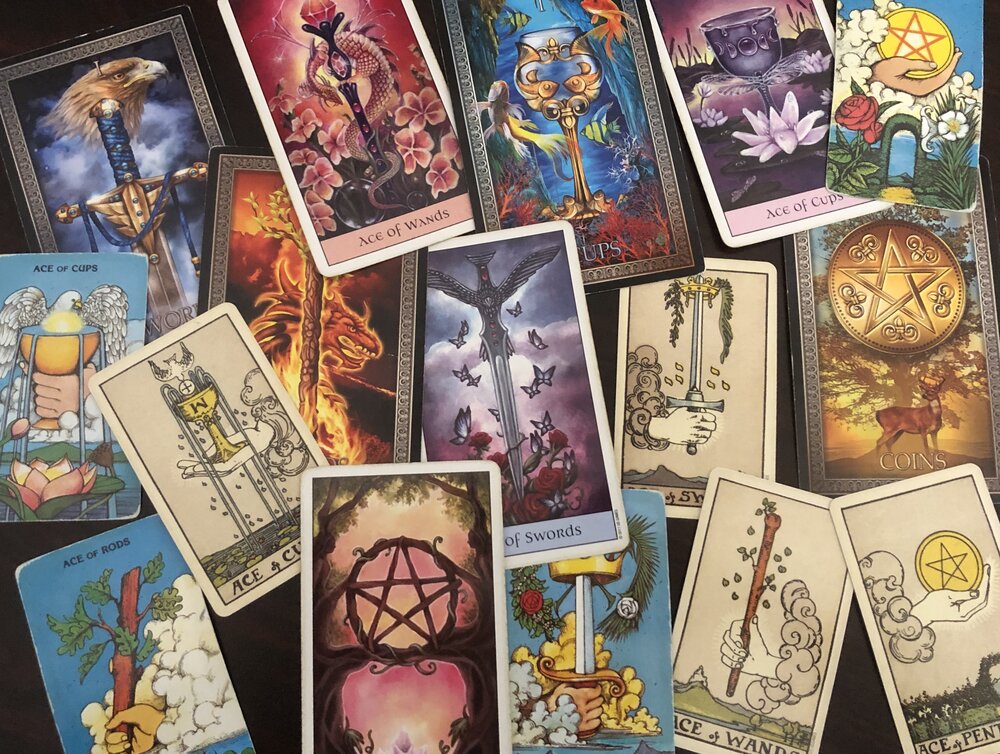 The Power of the Tarot Aces

I have a huge affection and affinity for the four Aces of the Minor Arcana. Within these cards I find power and magick, and many opportunities for truth-telling.

Typically, in a reading we can see each Ace as a new beginning. The sort of new beginning is determined by the suit.

For example, the Ace of Pentacles might be a new job, or new money, or a new way to care for your health, such as a new diet.

The Ace of Swords might be a new idea, a new understanding, new information, new technology or a new sort of communication.

The Ace of Wands might be a new creative project, a new passion or a new energy or sense of vitality.

Yet, there is so much more to be found in these four cards. Not only do they each speak of a new gift, or a new journey, they also speak of untapped potential. Each Ace can be like a seed waiting to sprout, or an egg waiting to hatch. Within these cards we can see the incubation, as well as the beginning.

Each of the Aces can also speak to a need to find the source, or the essence of something. Sometimes a journey leads us back to the root. In these cases, the Aces can each be the goal of a journey, or the successful end of a journey.

The power of each Ace is to hold the essence of their element. The Aces can tell us where we are going, they can urge us forward, and they can help us keep our goals firmly in mind.

The Aces can also tell us what we need to nurture in order to get to where we are going.

The Aces are the Four Tools of Magick. We can use them to invoke their elements and to create sacred space.

The Aces correspond with our chakras. We can use them in chakra healing and activation.

The Aces are archetypes. The Ace of Cups is the Holy Grail, while the Ace of Swords is Excalibur.

The Ace of Wands is the priapic symbol of life waiting to happen. The Ace of Pentacles is the Earth Mother herself.

It is easy to dismiss the Aces simply as the energy of new beginnings. They are that, and so much more.

Pages are about youth, learning, and communication. Aces are about initiation, essence, and source.

We can also see a correlation between Aces and Tens, since they are numerologically the same. We might see the Aces as the beginning of the journey, and Tens as the end. Yet, we could also reverse that and see the Tens as the situation we find ourselves in when the story begins, and Aces and the solution to which we eventually arrive.

I often like to see the Tens as the higher octave, or next level, of the Aces.

It is always a good exercise to find more connection, information, and power within individual cards and sets of cards. This is especially true when we believe we know the cards well. I think the Aces are especially important to explore because their simplicity can cause us to miss their depth if we don’t take the time to look.

The Power of the Tarot Aces