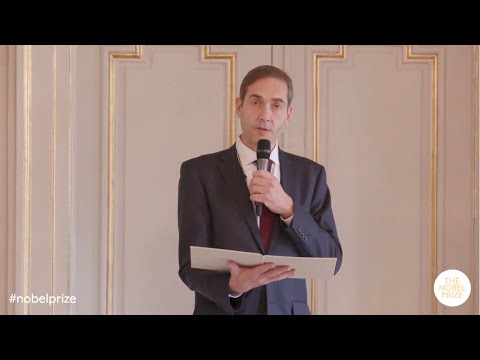 The Stockholm-based Swedish Academy, which names the Literature Prize committee, announced the winner on Thursday.

Glück’s works are known for exploring personal loss and tragedy, especially in family life. She also draws on her own experiences, as well as subjects related to modern life and nature.

The Academy's permanent secretary Mats Malm said he had spoken to Glück just before making the public announcement.

"The message came as a surprise, but a welcome one as far as I could tell," Malm told reporters.

The 77-year-old Glück is a professor of English at Yale University. She had no immediate public comment.

Glück joins a handful of American poets who have received the Nobel Prize in Literature. The last American to win was musician Bob Dylan in 2016.

Glück is also one of the few women honored with the literature prize. She is the fourth woman to receive the award since 2010. Only 16 women have won the Literature Prize since the Nobel awards began in 1901.

The work that first brought Glück wide attention was a collection of poems called “Firstborn,” published in 1968. From there, she soon became recognized “as one of the most prominent poets in American contemporary literature,” the Nobel literature committee said.

Anders Olsson is chairman of the literature committee. He described Glück’s voice as “candid and uncompromising,” a signal that “this poet wants to be understood.” But her writing is also “full of humor and biting wit,” Olsson said.

Drawing comparisons with other writers, the committee said Glück was like 19th-century American poet Emily Dickinson, in her “severity and unwillingness to accept simple tenets of faith”

Jonathan Galassi is president of Glück’s publisher Farrar, Straus and Giroux. He said in a statement he was sure the Nobel award would bring her works “to many, many new readers.”

Glück’s poetry collections include “Descending Figure,” “Ararat” and “The Triumph of Achilles,” which was published in 1985 and won the National Book Critics Circle Award. Glück was also awarded an American Pulitzer Prize for poetry and was named Poet Laureate of the United States in 2003.

In 2015, President Barack Obama honored Glück with the National Medal of Arts and Humanities. In giving the award, Obama said her poems were able to capture “the quiet drama of nature and the quiet emotions of everyday people.”

The Associated Press, Reuters and Agence France-Presse reported on this story. Bryan Lynn adapted the reports for Learning English. Ashley Thompson was the editor.

austere – adj. very simple, with only the things that are truly necessary

candid – adj. honest and telling the truth, especially about something difficult or painful

wit – n. the ability to use words in a smart and humorous way

tenet – n. one of the principles on which a belief or theory is based