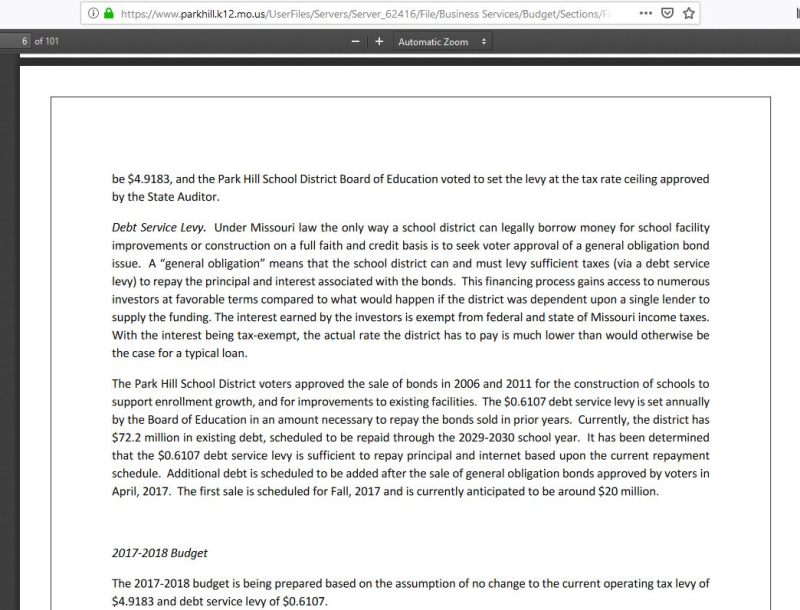 Since the Park Hill School District refuses to use the very expensive and limited viewership technology called "YouTube" to broadcast school board meetings, I'm left to interpret school board agendas.

The screenshot below is from the 2017-18 Park Hill School District budget.  In the 2017/18 budget process, the property tax operating mill levy was $4.9183 which was assumed to be the rate ceiling established by the State Auditor's Office (SAO) per Missouri's Hancock Amendment.  There wasn't a voluntary rollback per this budget so you paid more in taxes because assessed values in Platte County increased by 7%. 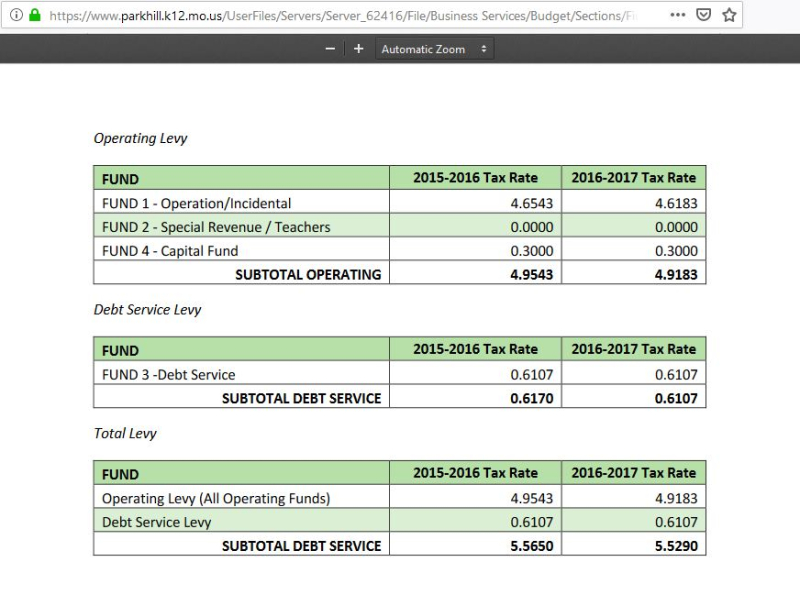 That means your taxes went up because assessed value within the school district went up by 7% that year and people were taxed at the same rate of $0.6107 which means you paid more than the intent of the Hancock  Amendment's goal to limit tax revenue increases to governing bodies greater than 1.5%.

Well guess what happened?  The 2017-2018 budget was adopted before the SAO finished the math and consequently the operating levy was officially lowered to $4.7928 because that was the ceiling established by the SAO.  This action occurred during the August 2017 board meetings.  This kept the operating levy at a rate consistent with the intent of the Hancock Amendment. 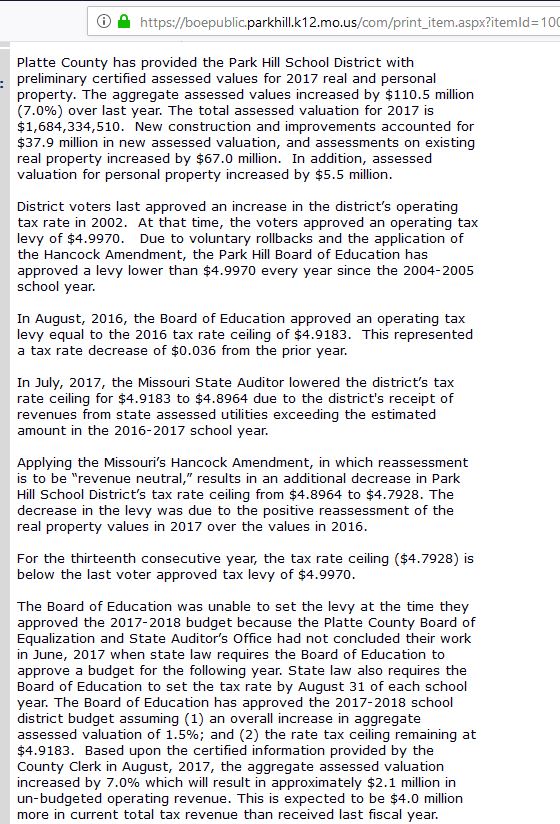 Now take a look at the current mill rates which were discussed at the 8/8/19 meeting.  You can read for yourself but again property assessments on existing property went up $73.6M or 7.4% 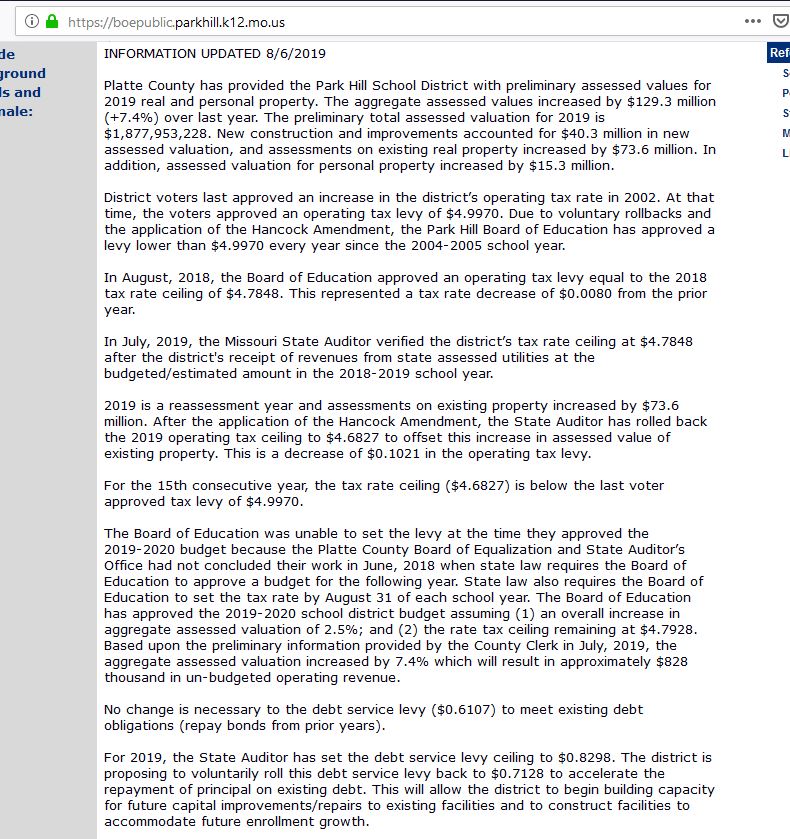 Now did you read the last paragraph above?  I'll repeat it for you:

For 2019, the State Auditor has set the debt service levy ceiling to $0.8298. The district is proposing to voluntarily roll this debt service levy back to $0.7128 to accelerate the repayment of principal on existing debt. This will allow the district to begin building capacity for future capital improvements/repairs to existing facilities and to construct facilities to accommodate future enrollment growth.

Did you pick up on the fact that the debt service levy increased from $0.6107 in FY18 to $0.7128 when property assessments in Platte County have increased over 7% the past two years.  I may have went to Illinois public schools, but that appears that the Park Hill School District has increased the debt service levy (your taxes) by 16+%. Don't believe me?  Well take a look at the district's own presentation and note how they try to convince you with the double asterisks that you're getting a lower debt levy rate because it's lower than what the Hancock Amendment will allow. 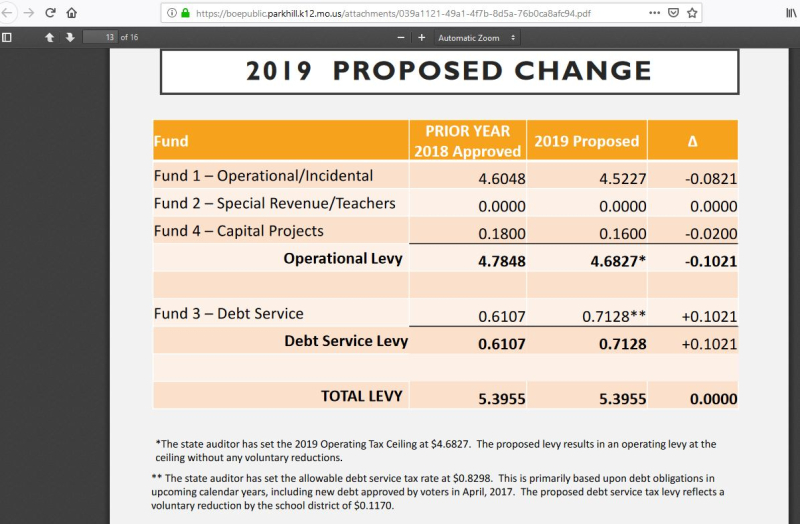 Here is the form that Bart Klein is going to sign increasing your taxes for "no-tax increase" bond payments. 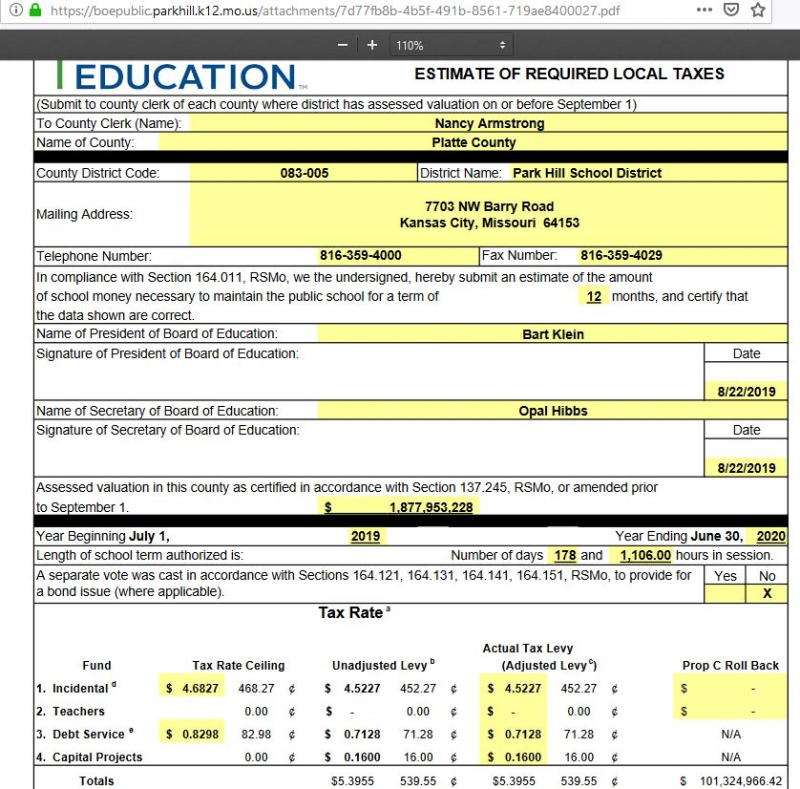 Now we also have another problem in the fact that the Park Hill School District didn't budget anything for the increased staffing at three new schools and now is running an annual operating deficit which will total over $18 MILLION over the next four years.  Where did I get that number?  Screenshot from a presentation at the 5/23/19 board meeting.  Too bad I can't go back and watch a video to see the discussion and maybe get a better understanding of why this is going on...... 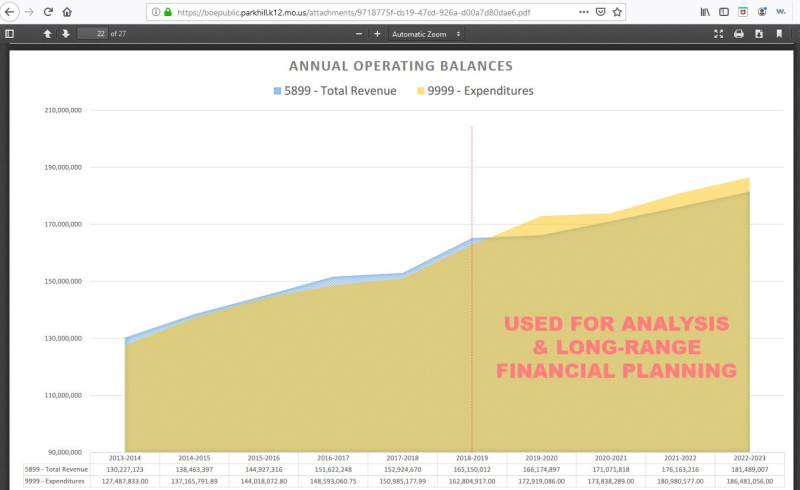 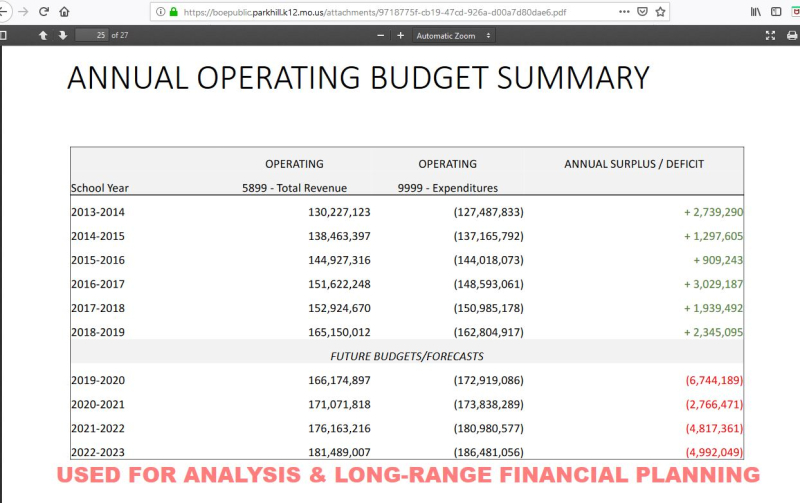 This is right after the school board approved using operating fund reserves to pay the capital cost of the new high school.  In case you missed that post, it's here and you just need to scroll down towards the end because it included election stuff.  Did anybody know about this upcoming structural deficit and if so, why didn't anyone ask if spending operating reserves was wise given structural deficits.  Again, since the school district refuses to get with the 21st century and broadcast their meetings, no one will really know.

One thing I want to point out is that we have someone else starting to watch the school district.  I don't know who is doing this but I understand the anonymity.  I've heard quite a few stories of retaliatory behavior from anyone who doesn't toe the line with the official spin.  You need to check out the Park Hill Transparency Project and follow them on FB and Twitter.

Now those of you sitting out there screaming "yeah but that's not the real story and you're spreading disinformation" I have a simple way to straighten me out and shut me up.  Ask your school board and administration why they refuse to tape and broadcast meetings.  I know there will be quite a bit of consternation with this post but in my quest for transparency from this governmental agency, I feel strongly that meetings discussing our children's education and how our money is stewarded should be broadcast for everyone to see.

Meanwhile, I just want to point out that tomorrow, the Park Hill School Board is going to vote to raise your taxes to pay for debt/bonds.  The official tax rate hearing notice is here and if you want to ask the Park Hill School Board why they're raising taxes, you should show up tomorrow at 6:55, sign your comment card, and state your objection.  If you get there after 7, they won't take your public comment card and you won't have the ability to address the board. 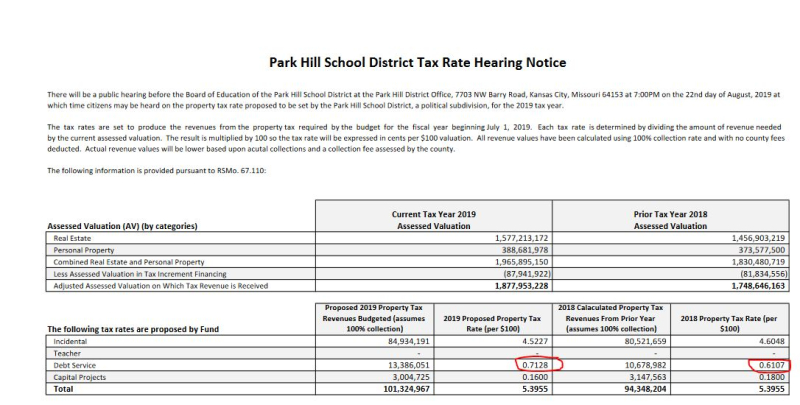 I don't know if you've ever heard of "YouTube" but it's this really cool website where anyone with a cell phone camera can record something and post it for people to watch and it's FREE.  Anyways, after writing all of this about how my taxes are going up to cover payments on a "no-tax increase" bond has gotten a song stuck in my head which I'll share with you to enjoy.

Clip credit to The Rollins Band.