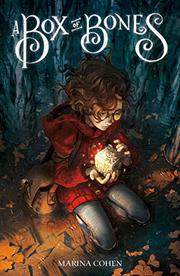 A Box of Bones, by Marina Cohen

12-year-old Kallie is following the path of her no-nonsense father, leading an organized life (a hanger with an outfit for each day of the week, for instance) devoid of whimsy and fanciful imagination.  (Which seemed almost pathological, and definitely unbelievable, to me whose life is the opposite!).  Her grandfather, who's her primary caregiver (her father having a job, and her mother having died years ago), is less rigid in his approach to the world, and so drags Kallie to a local fair.  There a mysterious stranger gives her a puzzle box, and Kallie's life changes.

The puzzle aspect to the wooden box overcomes Kallie's general aversion to inexplicable gifts from strangers, and so she sets out very scientifically to solve it.  When she does, a set of bone cubes with pictures on them fall out, and Kallie finds herself confronted with things she cannot explain.  Her best friend, the similarly scientific Pole Rodriguez, offers practical explanations for the odd occurrences creeping into Kallie's life, but a new classmate, Anna, who's wild imagination is her own coping mechanism, challenges Kallie with her exuberant embrace of the fantastical.  And for sixth grade English she has a teacher who's dragging her into Narnia, despite her best efforts to resist it.

Kallie starts wondering more and more about her mother, a very distant memory, and that story becomes the greatest challenge of all to her controlled, practical world-view.  When she turns on Anna and her stories about her life and rips them apart, wounding her friend greatly, she's forced to awknoldege that imagination is more than a pointless exercise, but something that can bring comfort, which Kallie will need when she finds out the truth about her mother.

Interspersed with Kallie's real-life story is a second story, a fantasy about Leah, a bone-carvers apprentice in a world under the cruel thumb of a tyrannical, murderous queen.  The two stories don't at first seem directly connected, but Leah's story, which seems tied to the bone cubes of the puzzle box, creates a dark and magical shadow for Kallie's ordinary life.  The ordinary life part is only just barely fantastical, but the reverberations of Leah's story make the whole thing magical (and will satisfy readers who are drawn to the book by its promise of fantasy!).  Illustrations by Yana Bogatch enhance the mood of dark fantasy (for readers who unlike me aren't reading so fast and immersedly that they don't see the pictures...sigh.  This is a Failing of mine.)

It is a gripping read (a single sitting one for me) poignant and magical and memorable.  It would make a great book discussion story for sixth graders; I'd love to be part of such a discussion, and pick apart the interconnections of the two stories.

For what it's worth, Kirkus is right there with me on this one, although they're more direct in calling it a mystery.  It is mysterious, but Kallie doesn't actually "solve" the mystery of the puzzle box and why she was given it in the first place, so kids who read mysteries for the sake of following clues along a direct path might feel a tad disgruntled.   I am not one of those readers, being ready to accept that sometimes strange and magical things just happen.

ps:  Kallie goes on to read the subsequent Narnia stories on her own.

ps 2:  this might be my favorite cover of the year so far

A Box of Bones, by Marina Cohen