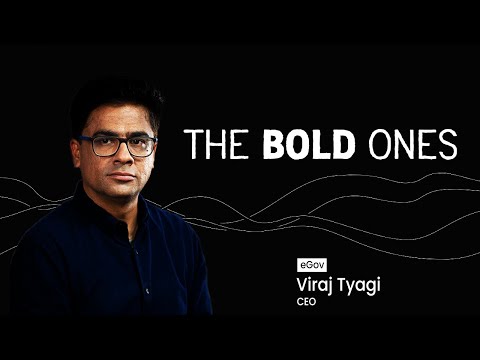 What goes into ensuring that every Indian citizen is able to access all services with ease and transparency? As per Viraj Tyagi, CEO, eGov Foundation, one of the world’s largest govtech platforms, it means to make sure that “services are delivered to the citizens in a manner that the 21st century should be - they should have access as well as choice of access”.

Viraj and his team at eGov Foundation are invested in building an urban governance platform built to digitise civic services and help create a meaningful life for each Indian.

Viraj is among the entrepreneurs whose stories are captured in Omidyar Network India’s newly launched video series titled ‘The Bold Ones - Innovating for the Next Half Billion’. Comprising videos combining interviews, archival footage and animation, the series captures power-packed stories of entrepreneurs who are building for the 500 million-plus Indians coming online for the first time via their mobile phones, a segment often referred to as the ‘Next Half Billion’ or NHB.

“The reason we exist is to make our cities easier to live in for the citizens. We are not just about providing technology but also providing a way of intersection between government and the citizen,” says Viraj in the video.

eGov enables access to services for 160 million citizens in over 200 cities and towns across India. Since its launch in 2003, the platform has processed more than 3.5 million grievances.

Including the next half billion

“When we talk about the next half billion, the key is to meet them where they are and don’t make assumptions where they need to be… can people from marginalised sections use some of our tools and get access to government services… you have to constantly think where are the next half billion and how can you go there,” asks Viraj, reiterating the importance of simplifying services for people who are just coming on the internet and seeking platforms that can enable them irrespective of their demographics and language.

Driven by the vision of creating an environment that lets citizens to avail “equitable opportunities successfully”, Viraj is playing a pivotal role in helping governments become more citizen-centric.

The personal and professional challenges and success Viraj has faced on his journey can be seen here.

The 11-part series is live on theboldones.in. Additionally, the series is also available on Omidyar Network India’s YouTube channel and social media handles.