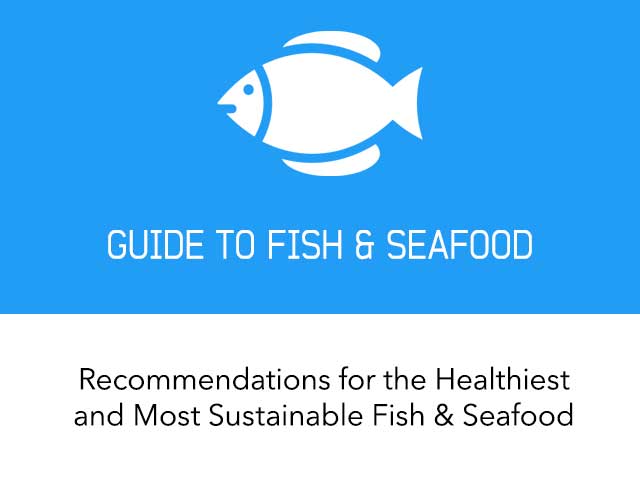 In response to recommendations by major health organizations, many people — including those following a low-carb or keto diet — have increased the amount of seafood they eat. Although research has shown a strong link between regular consumption of certain fish and reduced disease risk, there are also concerns about the health and environmental impact of current seafood trends.

In this article, I'll discuss the benefits and risks of including fish and shellfish in your diet and provide recommendations for making the healthiest and most sustainable choices.

Many of seafood's benefits have been attributed to the long-chain omega-3 polyunsaturated fatty acids (PUFAs) found in fatty or oily fish like salmon, sardines, mackerel, herring, and anchovies.

The two omega-3 PUFAs that have evidence-based health benefits are eicosapentaenoic acid (EPA) and docosahexaenoic acid (DHA). These healthy fats may help reduce inflammation that's at the root of heart disease, autoimmune disease, and other chronic health conditions (1). EPA and especially DHA are also crucial for proper brain and eye development from conception through childhood, and they remain important for cognitive function throughout our lives (2, 3).

DHA and EPA are found mainly in animal products, although algae also contains DHA. Fatty fish is the best source of these omega-3's, and studies suggest that eating it on a regular basis may help reduce disease risk. 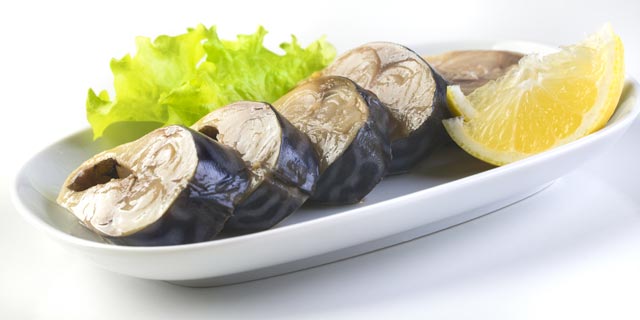 Research on Fish of All Types

Although the health benefits of seafood are impressive, legitimate concerns have been raised about it.

Mercury (technically methylmercury) is a heavy metal that can have devastating effects on human health at high levels of exposure, especially the brain, nerves, and heart. Over time, concentrations in our oceans have increased, due in large part to burning fossil fuels and mining coal in order to meet the world's growing energy demands.

The amount of mercury in fish varies greatly, with large predator fish like shark, King mackerel and swordfish having the most mercury and smaller fish and shellfish having the least.

As part of a large 2014 study, over 10,000 people filled out questionnaires about their seafood consumption within the previous month. Although fewer than 5% of the respondents had elevated blood mercury levels, those who reported eating high-mercury fish were 4 times more likely to have excessive mercury in their blood than people who mainly ate other types of seafood (10).

Importantly, selenium helps counteract the damaging effects of mercury, and seafood is an excellent source of selenium. However, in the case of high-mercury fish, the ratio of selenium to mercury may be too low to prevent mercury toxicity (11).

Because mercury can disrupt normal brain development in babies, the US Food and Drug Administration (FDA) and Environmental Protection Agency (EPA) recommend that pregnant and nursing women limit their intake of fish moderate in mercury and avoid fish high in mercury altogether.

For others, although the effects of low-level mercury exposure over time aren't known, research suggests that the benefits of consuming most types of fish outweigh the risks (4).

Polychlorinated biphenyls (PCBs) and dioxins are highly toxic pollutants found in several foods, including meat, vegetables, and seafood. Dioxins are created during treatment of waste products and production of herbicides and pesticides. PCBs were previously used in electrical equipment, plastics, and dyes until they were banned in 1977. However, both PCBs and dioxins continue to contaminate the environment, although their concentrations are slowly declining (14).

At very high levels of exposure, dioxins and PCBs may cause problems with neurological, reproductive, and immune function, and may also increase diabetes and cancer risk (12, 13).

In fish from the US and most Western countries, these and other contaminants are well below acceptable limits set by government health agencies. However, fish from other countries may contain much higher amounts. Although imported seafood is required to be inspected by the FDA, several sources state that only about 2% actually is. Therefore, fish with high levels of contaminants may still get into the US food supply.

Additionally, seafood from fish farms in China, Vietnam, and the Philippines may contain residues from antibiotics, which are banned on fish farms in the US and Europe.

With increased seafood consumption, the number of fish in our oceans has declined. According to a 2016 report by the Food and Agriculture Association (FAO), about one third of our oceans are overfished, and more than half are fully fished.

Overfishing of herring, sardines, and anchovies leads to loss of larger fish, sea mammals, and sea birds that depend on a steady supply of these fish for food (15). Some of the affected fish may be endangered and protected species, leading to undesirable shifts in our marine ecosystems.

In order to meet the growing demand for seafood, “aquaculture” (raising fish and shellfish for food) has become a major industry worldwide. Farmed fish and shellfish are housed in large cages that are submerged in the ocean, lakes, or ponds.

Currently, more than half of all seafood consumed by humans is farm raised, and according to World Bank, that amount will increase to nearly two thirds by 2030.

Similar to industrial farming of land animals, aquaculture has been criticized for providing fish with overcrowded living environments and unnatural diets. Although the fish are fed fish meal, which contains ground-up fish, they are often also given soybean and corn. As a result, their omega-3 PUFA content is lower than wild fish that eat smaller fish and sea plants. However, some farms have begun growing algae as food for these fish in order to boost their omega-3 content.

Another concern is that since standards vary from country to country, farm-raised fish from certain nations are much higher in contaminants than wild fish (16).

Is it better to choose wild or farmed fish? In some cases, you may not have much choice. For instance, an estimated 80-90% of all shrimp is farm raised.

Farm-raised salmon has a somewhat different nutrition profile than wild salmon, though, due to the differences in their diets (17).

Most of the wild salmon sold in the US is from the Pacific ocean, whereas nearly all Atlantic salmon is farmed.

Here is a comparison of the calories and macronutrients in a 100-gram (3.5-ounce) portion of wild salmon and farm-raised salmon (18, 19):

Farmed salmon is higher in calories and fat yet roughly equal in protein compared to wild salmon. Although farmed salmon contains more omega-6 fats than wild varieties do, they are both excellent sources of omega-3 fats and have extremely low omega-6:omega-3 ratios.

Other types of responsibly farmed fish from the US that are a good source of omega-3's are rainbow trout, oysters, and artic char.

Should I Buy Organic Fish & Seafood?

Despite high consumer demand, organic seafood only makes up a small portion of the overall market for fish and shellfish. In many areas, it can be difficult to find. Currently, the European Union and Canada have a system for organic aquaculture certification, whereas the USDA's plans for developing a certification standard — which started back in 1999 — have been put on hold. Therefore, any seafood purchased in the US labeled "organic" meets the EU or Canadian standards, which are not as strict as the proposed US Standards.

Purchasing organic fish can help limit your exposure to PCBs and other contaminants. However, choosing wild seafood (which technically can't be considered organic because diet and environment aren't controlled) remains an excellent option.

Here are several ways to make the healthiest fish and shellfish choices.

The Monterey Bay Aquarium Seafood Watch has a downloadable, printable guide that can help you choose fish and shellfish that are fished or raised responsibly, contain fewer contaminants, and have the least impact on the environment.

Fish and Shellfish Lowest in Mercury

According to FDA data obtained between 1997-2010, these fish and shellfish have the lowest mercury concentrations:

Fish and Shellfish Highest in Mercury

These fish are extremely high in mercury and should be avoided altogether by pregnant or nursing women and small children. Everyone else should eat them rarely, if at all: 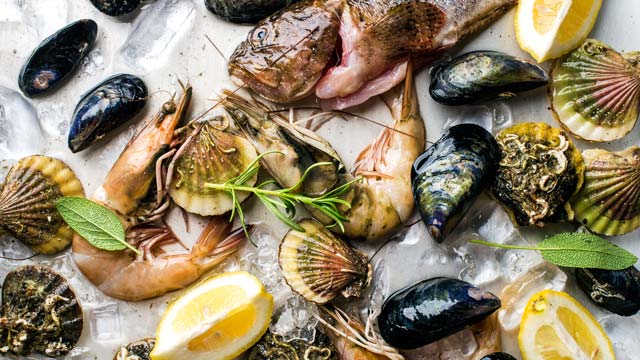 General Tips for Safely Including Seafood in Your Diet

Aim for about 170-200 grams (6-7 ounces) of fatty fish per week. Doing this on a regular basis helps you meet your omega-3 PUFA needs.

Pregnant and nursing women should consume fish 2-3 times per week. Select from the “Best Choices” list on this guide. Try to choose sardines, salmon, and anchovies most often to ensure that your baby receives enough DHA for optimal brain growth and development.

Not All Farmed Fish Is Bad for You

Don't fear all farmed seafood. Fish and shellfish from US farms are required to meet certain standards in order to be sold to the public. It's nearly impossible to consume only wild fish, with a few exceptions like salmon.

Avoid or limit fish farmed in Asia. These tend to be higher in PCBs, dioxins, and other contaminants. Additionally, they may contain antibiotic residues.

Canned fatty fish is healthy and economical. Nearly all canned salmon, sardines, and anchovies are wild. Ideally, purchase brands that use BPA-free cans, such as Wild Planet.

If Catching Your Own

Use caution when eating your own catches. If you catch your own fish and shellfish or consume seafood caught by others, make sure to check with local health authorities about potential contaminants.

Have your mercury level tested, especially if you're planning to become pregnant. If you eat large amounts of fish on a regular basis, it's a good idea to ask your doctor to check your blood mercury level.

Fish and shellfish provide several health benefits. Fatty or oily fish — such as salmon, herring, sardines, and anchovies — are an excellent source of omega-3 PUFAs that help control inflammation and may reduce disease risk.

However, questions remain about the health impact of consuming potentially contaminated seafood frequently, along with concerns about the environmental consequences of overfishing and poorly managed fish farms in some countries.

When it comes to health and sustainability, it's important to know where your seafood is coming from.

Overall, based on numerous studies and opinions from several experts, the benefits of eating seafood far outweigh the risks, as long as certain guidelines are followed when choosing what types to eat and how often to consume them.