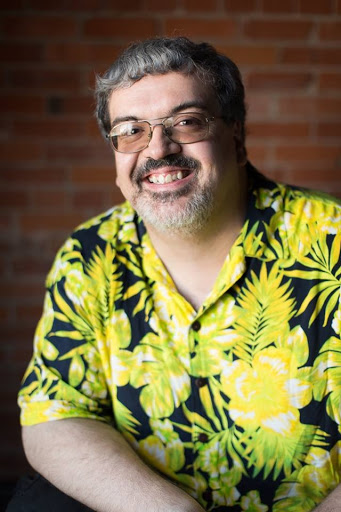 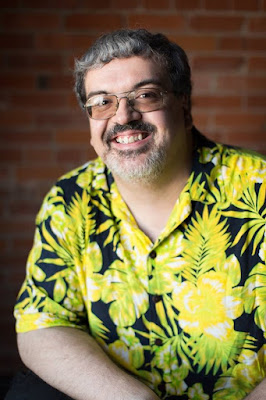 I studied journalism at Washington State University in 1999, worked for the college newspaper the Daily Evergreen all four years, and then worked in Moses Lake, WA, for five years, working for the local newspaper, the Columbia Basin Herald, covering business and agriculture.


I moved back to Spokane in 2008 for my current job, for the agriculture newspaper, the Capital Press.
It’s been more than 10 years and I am still on a Spokane renaissance. My brother Steven and I like to try different restaurants and experience the city we grew up in as grownups.

Q:  What are you working on now?

A:  As of this writing, I’m in the middle of a monthlong personal challenge to myself where I write a monologue a day for the month of February 2019. Inspired by the monologues of Asher Wyndham.

I’ve also done a personal challenge where I write a 10-page play each day for a month, inspired by posts by Chip Bolcik on the Official Playwrights of Facebook page. It can be incredibly exciting to sit down and have absolutely no idea what you’re going to write.

Some of my favorite plays I’ve written have come out of these challenges. My full-length young adult play, “Timmy’s Big Kiss,” came out of one play. So did my one-acts “A Sprig of Mistletoe Up in That One Little Corner of the Jail” and “The Bee’s Knees.”

So far this month, I’m especially proud of the monologues “Jesus at 10,” “Les Pamplemousses” and “The Woman and the Spoon.”

I have a couple full-lengths, one-acts and screenplays in mind. I’m waiting for the next big idea to grab me and not let go.

Q:  Tell me, if you will, a story from your childhood that explains who you are as a writer or as a person.

A:  When I was little, my mom would ask me to write stories involving certain things. Like it might have to include an apple, an orange and a bald eagle.

It turned out to be perfect training for play prompts and timed-writing play festivals. I’ve been fortunate enough to participate in several 24-hour play festivals at Stage Left Theater in Spokane, where you show up one evening, are paired with a director and group of actors, given a prop and have 12 hours to write a 10-page play; they then have 12 hours to memorize and put the play on the next evening. (It’s so much fun.) My props were a stuffed iguana (“Under an Iguana Moon”) and a ceramic cat (“Operation Keep the Kitten Alive”).

Based on the advice of my friend Will Gilman, I ask the performers and directors if there’s anything they’d prefer not to do (and then I don’t write that); what they feel their strengths are and then if there’s something they’ve always wanted to do but never had the chance.

And then you put all of that together and make a play!

With “Operation,” actress Joni Elizabeth informed me she had been a champion thumb wrestler in high school. She was so good, her thumb had its own wrestling name: Hank!

“Well, that’s going in the play,” I thought. And Hank did indeed make an appearance. It was a gift.
I’ve also gotten to write several 10-minute plays in an hour for the Nugget Fringe Festival in Grass Valley, CA (from the comfort of home in Spokane!) We get a prompt and have an hour to write it, and it’s produced two hours later – I’ve done this with “High School Nachos,” “Continents Apart,” “Blackbirds Singing in the Dead of Night,” “Best Behavior” and “Selfies & Ladybugs.”

Again, so much fun! Thanks Mom!

Q:  If you could change one thing about theater, what would it be?

A:  Playwriting can be a pretty solitary undertaking. This can be a good thing in the course of the writing, because I’m completely free to play and break whatever rules I want or write whatever I want to write.

But the collaboration is just as important. I love turning over a play to a team of talented directors, performers, prop people, stage managers, technicians, costume designers and have them fall just as much in love with one of my scripts. We all bring our best to the play, rooting for one another all the while, and the whole becomes something greater than the sum of our parts.

I’d love to build and be a part of a theatrical team, with fellow playwrights, performers, directors and the like – and all of us just keep elevating one another as we work on our projects. To be able to say, “I love what you did here, I’m going to write THIS for you and see what you do with it.” Or, “Hey, fellow playwrights, I’ve got this idea for a theme for a festival – everybody see what you can do with this!”

And then it actually happens. On a regular basis.

I’ve gotten little tastes of this. Most recently, this last summer, when Ignite! Community Theatre in Spokane Valley put on a special showcase of 14 (!!!) of my plays. It was so cool to see so many actors I’ve admired onstage, including some I’d worked with previously, bringing life to words I’d written.

I think I’m finding it. Slowly but surely, here in the Spokane and Columbia Basin arts communities and beyond, with my fellow playwrights online.

You can’t force it. It has to develop naturally.

But I think I’m slowly getting more and more on the radar.

Q:  Who are or were your theatrical heroes?

A:  I experienced three works of art at that critical time in a young writer’s development: In high school. I saw a local production of David Ives’ “All in the Timing” at Spokane Civic Theatre. It was a window into the kind of writing I wanted to do.

I watched SPORTS NIGHT on TV, written by Aaron Sorkin. I see a lot of problems with Sorkin’s writing today –particularly the problematic writing for women, a lot of repetition of the same chunks of dialogue – but those first few episodes, so fresh and vibrant, especially the episode “The Apology,” made Young Me want to write like THAT.

And I saw a production at my high school of ONCE UPON A MATTRESS. My friends were in the show. I’d tried out for drama freshman year, it didn’t go well and I fled to newspaper. They looked like they were having so much fun up on stage. The curtains open, the lights go up, and the actress playing the Princess Fred appears, sopping wet and spits out a mouthful of water. It sails out into the audience and lands directly on an adorable little girl sitting in the front row directly in front of me. The girl and her family were stunned. It’s quite possibly one of my favorite memories of a theatrical experience. I want to capture my feelings watching that play, and give them to the audience.

I’d love to act, even though I’d be a total ham. Absolute and total ham. But I never know when I’m going to have a last-minute meeting out of town for work, so I could never realistically commit to a full run of a show.

When I was in Moses Lake, I’d fight to do advances for plays in a neighboring community, Soap Lake, and loved talking to actors and directors for previews.

After I moved back home to Spokane and it wouldn’t violate any journalism ethics, I sent my play, “Bed Ride,” to Randy Brooks, one of the actors and directors I felt fairly comfortable with. I said, “I’ve written a play, never written a play before. Please tell me what I did wrong.”
Randy called back a few weeks later and said, “Matthew, this works. Can I show this to our artistic director?”
And Beverly Hasper called a few weeks after that and said, “Matthew, can we put this on?”
“Bed Ride” was performed nine times by Masquers Theatre in Soap Lake in the summer of 2013. It was my first full-length play. My dad, mom, brother and I drove two hours from Spokane to Soap Lake opening night and then for all of the Sunday matinees. My second-grade teacher was in the audience opening night. It was life-affirming.

Q:  What kind of theater excites you?

A:  I love plays that play, that explore, that seek a next level, whatever that may be. I like to compare playwriting to driving a Ferrari. You say, “Let’s take this baby out and see what she can do!”

Some playwrights who are doing this kind of work:
My fellow Spokane resident Tristen Canfield wrote my favorite 10-minute play of all time, “The Window,” about a cat and a fish at the window. I saw it as part of the Spokane Civic Theatre’s Playwrights Forum Festival in 2015 and haven’t shut up about it yet.

Asher and his monologues.

Emily Hageman and all her writing. I think the messages she’s sending through her plays are so important. I especially recommend “Joan’s Arc,” “Back Cover,” “The Women’s Ten-Minute Play Reading Committee” and “Teenage Oysters.”

Diana Burbano and all of her plays. I’m especially partial to her short play “The Tower.”

Emma Goldman-Sherman and her plays, especially the short “Toilet Paper” and the full-lengths “FUKT” and “Whorticulture.”

Donna Hoke. I’m an avid Trade a Play Tuesdayer and especially partial to her “Teach.”

“Apples in Winter,” by Jennifer Fawcett.

Q:  What advice do you have for playwrights just starting out?

A:  I try to write at least a half hour a day. Before I started doing this, I would get frustrated because I wasn’t doing it consistently, just every once in a while, and it didn’t feel like I was making progress. A half hour is doable. Don’t get me wrong, at the start, it still feels like it’s going to take forever. But I always feel better once I’ve done it.

I give myself permission for the writing to be bad. Some of it is terrible, and will be buried in the backyard forever, but the writing got done for the day. And I give myself permission to keep going if I really hit a groove or don’t want to lose the momentum. For the monologue challenge, my goal is at least one page, but when writing “Les Pamplemousses,” it was the evening before a really busy week of work and I was enjoying myself so much, I wound up with 31 handwritten pages.

I write longhand first, 99 times out of 100. That way I can cross out things and rearrange sections with arrows and track my progress. On the computer, I can delete something and it’s gone forever. That makes me nervous. When I’m typing up the handwritten pages, it’s like I’m already on a third draft.

A:  Randy Brooks of Masquers Theater sadly passed away recently. His family could use some help, if you are so inclined to help a longtime theater advocate: https://www.gofundme.com/to-help-my-mother-with-the-medical-amp-mortuary?utm_source=facebook&utm_medium=social&utm_campaign=fb_u_g&fbclid=IwAR3z7lPWFARcl1YjagU4s7FQnGUCIAogW2FWVoPi0g3XMXxQ3oOtD6CB320

My Shakespearean mouse play “The Tragedie of Rockford & Almira & the Cat – A Comedie,” will be part of the Tree City Playhouse festival for the Sylvania Community Arts Commission May 3-5 in Sylvania, OH: http://www.sylvaniaarts.org/theatre/treecityplayhouse/

My YA one-act “When You Are a Little Bit Older” will be part of the Lincoln Park Performing Arts Center One-Act Play Festival, directed by Sophia Englesberg and Korey Grecek, in Midland, Pennsylvania.http://www.lincolnparkarts.org/

This is particularly cool for me, because Sophia and Korey, along with Peter Stamerra, were in the world premiere of the play in September 2017 and liked it so much they asked to direct it! A high compliment for any writer.