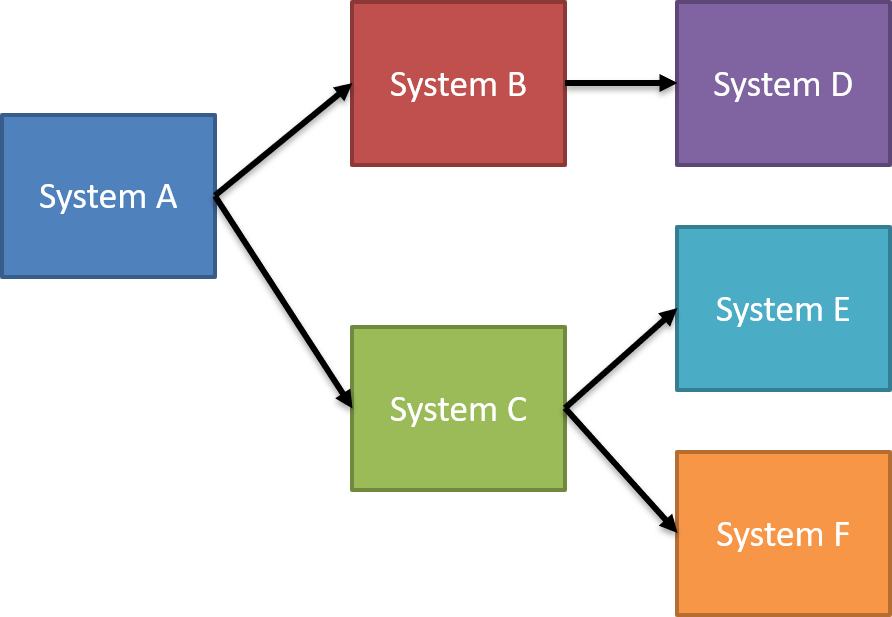 Posts in this series:

In the last post, I walked through the overall problem we run into with diagnosing issues in distributed systems - mainly that it can be difficult to determine causality because we don't have that "stack trace" with a single in-process application.

In a downstream system that experiences a failure, how do we link that failure to the original request, and all between? This is where distributed tracing comes in.

Product companies and OSS filled the void, but there became a problem - each product, OSS or not, had its own way of providing additional context to each request to be able to link them together. The solution to causality is rather simple - we just need some context of the parent system/process that initiated the current request. That context is as simple as providing some unique identifier for the current request to all subsequent requests.

It also allows requests to include some state information, but most important are those identifications. With an ID and parent ID, we can now create a directed acyclic graph, very similar to what we would see in a Git commit history.

In order to flow tracing identifiers through a request pipeline, regardless of the technology of the "in" and "out" request, we need some means of capturing the incoming tracing identifiers (on headers), storing them, and flowing them to outgoing headers. The basic pieces for this flow are:

One of the big pushes for observability in .NET Core 3.0 was to enable this W3C standard. Although it's not turned on by default for backwards compatibility reasons, if you turn it on:

That will use the W3C standards for identifiers, but we still need to consume and propagate these trace identifiers. Luckily, we can see how ASP.NET Core and HttpClient did this:

There's a lot more going on in that code that we'll get to soon, but first things first, we need middleware for NServiceBus to:

Luckily for us, NServiceBus has a robust middleware API that makes it easy for us to add these pieces, Behaviors.

The first step in the process for diagnostics is to start an Activity at the beginning of processing a message and stop it at the end. We need to go one step further to add the appropriate parent ID. We can do this with a behavior defined for incoming messages:

Behaviors in NServiceBus are similar to ASP.NET Core middleware. You get two parameters, the first being the context of the operation performed, and the second delegate to perform the next action in the chain.

The StartActivity method needs to do two things - start an Activity, and set pull the traceparent header off the incoming message:

We first create an activity with a good name, in my case I chose NServiceBus.Diagnostics.Receive. There's not a ton of recommendations about naming activities, but it should be something meaningful to the overall operation that's being performed. Activity names are hierarchical for future purposes, so we want to adhere to some sort of namespacing. The ASP.NET Core name is Microsoft.AspNetCore.Hosting.HttpRequestIn and HttpClient is System.Net.Http.HttpRequestOut.

Finally, I start the activity, and Activity.Current represents this new activity. Stopping the activity is straightforward - the only thing I really need to care about is setting an end time of the Activity:

Setting an appropriate end time for the activity will mean more later on when we start raising diagnostic events, but we want to make sure the duration of the event is just around calling the next item in the pipeline.

That's incoming requests, what about outgoing ones?

Just like we have incoming behaviors for messages, NServiceBus has outgoing behaviors as well. We just need to reverse the flow from above - set the traceparent header on outgoing messages from the current Actvity:

Starting the activity is much simpler now:

But wait, we're not setting the parent ID! For outgoing messages, we don't need to. If there's a current started activity, our activity will automatically have its ParentId set to Activity.Current.Id, so we're good to go without managing all that ourselves.

Next, we need to inject the headers of the current activity into the outgoing request:

Stopping the activity looks exactly the same as the incoming requests:

I enable this feature by default, with the future idea that anyone that references this package/assembly will get this behavior opted in. With all of this in place, how does this look in practice?

I wanted to simulate all these different kinds of flows, which use a variety of hosts and communication:

Incoming HTTP will be a regular ASP.NET Core application and host, and the incoming NServiceBus will be a worker service. I wanted to capture all manners of communication with these two applications:

My Web Server is a web application with this diagnostics code added, plus using the NServiceBus extension to .NET Core generic hosting. I created a simple API controller that uses the NServiceBus IMessageSession injected to send an AMQP message via RabbitMQ:

The handler of this message on the worker service makes the HTTP call and a Reply:

The API endpoint is rather dumb, it's the weather dummy data that I stuck in a database:

And the Reply handler doesn't do anything fun, but it stops the distributed flow:

With all the pieces in place, let's trace the flow from the initial request all the way through each receiver and out again.

It all starts with initiating the request with the Swagger UI:

We see that the current activity ID has a value, but the parent ID does not. This makes sense - the Swagger UI doesn't track activities and does not pass a traceparent header along.

With the message sent, let's look at the message in RabbitMQ to see if it has a traceparent value that matches the above:

It does! Let's now run the whole system end-to-end and watch the activity IDs in our logs:

We can see that all of our activity IDs share the same trace-id fragment, while the parent-id values differ (technical detail, but these link to a span in tracing terms).

With our tracing identifiers correctly propagating, we've laid the groundwork to start putting humpty dumpty together again. In the next post, we'll look at how we can raise diagnostic events so that something can see these traces outside of directly instrumenting our traffic.