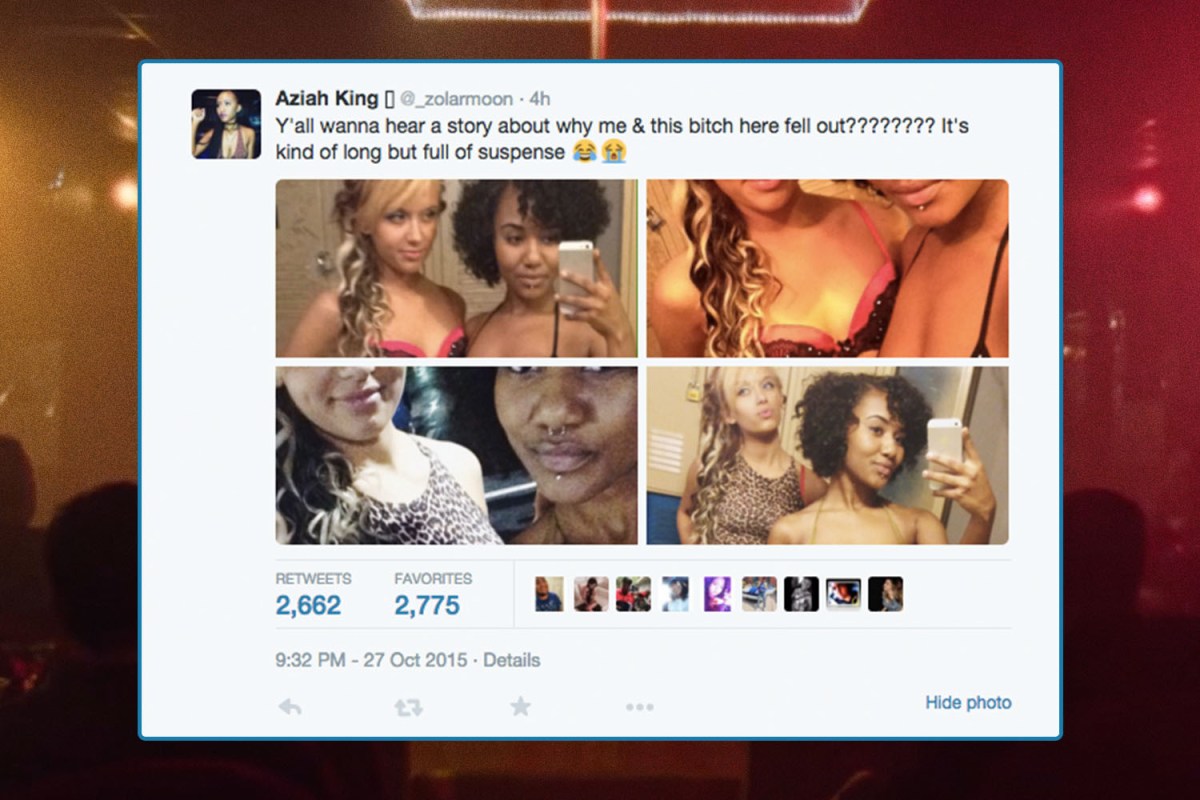 Like many on the internet Wednesday, I watched the trailer for A24’s new film Zola. The trailer for the much-anticipated stripper drama was, as The Cut perfectly called it, “dizzyingly bonkers,” and I was more than ready to sit down and watch the crazy film in its entirety (unfortunately, it won’t debut until June 30).

The film, directed by Janicza Bravo, tells the enthralling tale of a Detroit waitress named Zola (Taylour Paige) who meets sex worker Stefani (Riley Keough) and then joins her on a road trip down to Florida for a weekend of dancing and partying. But what at first seems to be a “glamorous trip full of ‘hoeism‘” quickly devolves into a hellish 48-hour journey full of pimps, idiot boyfriends, gangsters and other wild, unexpected adventures. While the trailer should be enough to pique your interest, the real story here is the 148-part, supposedly-true Twitter thread from which it is adapted, which basically broke the internet when it arrived in 2015.

The semi-fictional character Zola is based on Aziah “Zola” Wells, who took to Twitter on October 27 of that year to deliver a story that opened with the now-iconic line: “Y’all wanna hear a story about why me & this bitch here fell out???????? It’s kind of long but full of suspense

I encourage you to go read the full story, which has since been deleted from Twitter but has been re-uploaded to various sites, including Imgur and Genius. The premise is obviously similar to the films: a can’t-peel-your-eyes-away tale of stripping, trapping, murder and attempted suicide with a sex-trafficking twist, all grounded in Wells’s hilarious commentary and storytelling throughout. Seriously, go read it.

But if you’re cut for time, I’ll try and do my best to synopsize.

As the story goes, while working as a waitress at Hooters, Wells meets a customer named Jess (or Stefani, in the film) and they bond over related interests like stripping and sugaring. The next morning, Wells receives a text from Jess inviting her down to Florida so they can make some money dancing at strip clubs. Wells agrees and she, Jess, Jess’s boyfriend (played by Nicholas Braun in the film) and Jess’s “roommate” Z (played by Colman Domingo) — whom Wells discovers is actually Jess’s pimp — all road-trip it down to Florida. Once there, the girls don’t make enough money dancing and Wells finds herself wrapped up in a prostitution ring run by Z. After Jess’s clueless, deeply emotional boyfriend finds out what Jess has been doing, he gets upset and flings himself off of a fourth-story balcony but is thankfully rescued by his own pants. Later on, Jess gets kidnapped, but Z finds her, shooting and murdering the man who kidnapped her. The story ends with Wells and Jess’s boyfriend flying back home before it’s revealed that Jess and Z, who is wanted for kidnapping and murder, have been arrested in Las Vegas. And just as Wells concluded her story, “thats the end of that.”

The release of the film’s trailer prompted many on Twitter to either seek out and read the thread for the very first time or — for Twitter veterans like myself — to reflect on the massive cultural moment it would ultimately become. Even though I initially forgot about the viral story (it’s been a while), I now remember how it genuinely captivated the internet for a few very long and weird days. Everyone from Missy Elliot to director Ava DuVernay were tweeting about the “wild” Zola story and how it would make for a great movie. Rolling Stone published a tell-all feature story with Wells’s exclusive account of how the trip really went down. The Washington Post even fact-checked it, and found large swaths of the story to be true, save for the shootout, murder and attempted balcony-jumping suicide. But the pimp behind Zola’s saga, whose real name is Akporode Uwedjojevwe, was actually arrested for sexual assault, battery and sex trafficking.

Of course, this is not a feel-good tale by any means. Comedic at times and totally bizarre, yes, but it’s still a tale filled with a lot of harrowing violence, almost all of which turned out to be true. But it’s Wells’s singular voice — tailor-made for the platform on which she published it — that made the thread worth reading and obsessing over (something you will never catch me doing now), and it’s nice to see someone finally getting their dues for producing such an iconic piece of internet culture. If she didn’t invent Twitter threads, she’s certainly the first true titan of the form, for better or worse.

Now we have to deal with viral Twitter stories on a daily basis, like Bean Dad or the recent Cinnamon Toast Crunch shrimp tales saga, which usually spurs some inane, pointless and exhausting discourse that makes checking the social platform feel almost like a chore. Revisiting the Zola story has made me almost nostalgic for 2015 Twitter. Sure, it was filled with Buzzfeed quizzes, reaction gifs and “relatable” Chrissy Teigen tweets (RIP), but it was also a burgeoning platform for wild, whimsical sagas and weird comedy that existed there and there alone. And my brain, which was not yet rotted by the internet, loved every second of it.