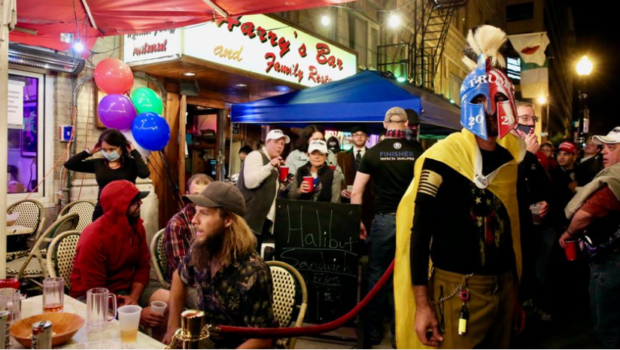 D.C. Restaurant Fined $2,000 Because Patrons Weren’t Wearing Masks, Seating Too Many People At A Table

Harry’s Restaurant was issued two fines after city officials observed multiple violations, including guests who weren’t wearing masks and a table with more than six diners, WTOP reported. Supporters of President Donald Trump who were in town for the “Millions MAGA March” over the weekend gathered at the restaurant where few wore masks or practiced social distancing, the Washingtonian reported.

A second $1,000 fine was issued on Saturday, Nov. 14, for “patrons without facial coverings and more than six (6) patrons being seated at a table,” according to the ABRA, WTOP reported.

Harry’s Restaurant did not respond to the Daily Caller News Foundation’s request for comment.

D.C. Restaurant Fined $2,000 Because Patrons Weren’t Wearing Masks, Seating Too Many People At A Table is original content from Conservative Daily News - Where Americans go for news, current events and commentary they can trust - Conservative News Website for U.S. News, Political Cartoons and more.

D.C. Restaurant Fined $2,000 Because Patrons Weren’t Wearing Masks, Seating Too Many People At A Table