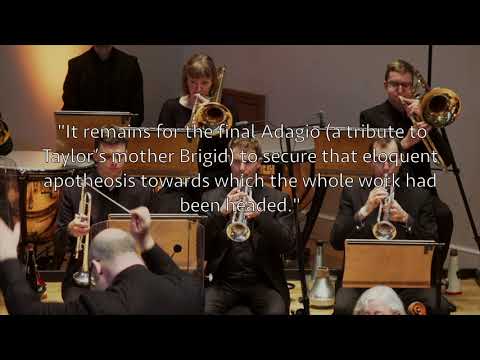 This article was originally written for the Catholic Herald

Next time you are listening to Beethoven’s Fifth Symphony or Mahler’s Second, imagine what it would have been like to be there for the first performance.

Imagine the excitement of buying a ticket to hear a new Beethoven or Mahler symphony. Think of the impact that concert might have had on you, and then imagine the excitement and expectation as you wait for the next Brahms or Prokofiev symphony. Even today, encountering one of the great symphonies for the first time can be a life-changing experience for musicians and listeners alike.

I still hear audience members refer to attending concerts as “going to the symphony”. And yet, for much of the last 50 years, symphony orchestras have got out of the habit of presenting new symphonies. For most listeners, there is no new symphony to go and hear, no next symphony to look forward to. And, as a result, many music lovers have come to the view that symphonic music is a finished project. Shostakovich, perhaps the greatest of 20th-century symphonists, finished his last symphony in 1971. Did the symphony die with him?

It’s important to remember that the 20th century was, for much of its time, a golden age for the symphony. Generations of audiences feasted on new works by Vaughan Williams, Sibelius, Walton and Copland.

But as post-war Modernism took hold, the place of contemporary music on orchestral programmes was given less and less to new symphonies, and more and more to works that were both short and “difficult”. Minimalism has given us notable symphonies by Philip Glass and John Adams, but overall the legacy of Modernism, Minimalism and post-Modernism has meant, in practical terms, that most new works orchestral audiences hear have a very different kind of ambition from that of a Bruckner or Tchaikovsky symphony.

But the symphony never went away. Even though opportunities to hear new symphonies have been extremely scarce, the last 50 years have seen major symphonic cycles from composers as diverse as Rautavaara, Penderecki, Schnittke, Lutosławski, Christopher Rouse, John McCabe and many others.

A turning point for me came a few years ago when I conducted Philip Sawyers’s Second Symphony with the Orchestra of the Swan. There was a climax about two thirds of the way through the piece where it felt as if the musicians found a superhuman gear and just seemed to blow the walls off the building. The excitement for all of us at the end was unforgettable. Although this was actually the third or fourth performance, the concert felt like what I imagine it would have been like to be there when people were hearing Brahms’s First Symphony for the first time. I wanted more.

When I was appointed principal conductor of the English Symphony Orchestra, just about the first thing I did was to ask Philip Sawyers to write a Third Symphony. When the score arrived, I was staggered by its beauty, power and relevance. To me, it speaks in universal, abstract terms to the challenges, horrors, hopes and possibilities of our time in the way that Shostakovich’s Fifth spoke to his time in 1937.

It’s quite awe-inspiring to ask a friend to write something, and several months later to be handed a masterpiece. In this case, it made me realise that, as a conductor, I had to ask for more of these kinds of pieces. It’s all well and good to commission seven-minute concert openers, but what happens when you say to a composer: “Go ahead, make the biggest statement you’ve ever made. Go and wrestle with your heroes, take up the challenge of this most iconic of all musical forms, and produce something that will excite and challenge listeners today the same way Mozart’s or Elgar’s symphonies would have in their day”? In my experience, that opportunity and encouragement can be life-changing.

So, my ESO colleagues and I decided to ask for more symphonies by establishing the 21st Century Symphony Project. Our initial goal is to commission, premiere and record nine new works by nine different composers. We want not only to see nine great new pieces come to life; we want to spark a conversation about the symphony today, and we want to encourage our composers to show the full spectrum of what it can be. There will be programmatic symphonies, vocal symphonies, and symphonies by composers of different generations, backgrounds, languages and genders.

We want listeners to feel a sense of expectation and excitement as the project unfolds. So far, we have premiered Philip Sawyers’s Third, David Matthews’s Ninth and Matthew Taylor’s Fifth. The three premieres to date have been among the most memorable musical occasions of my life, and the response both of musicians in the orchestra and our public, including the critics, has been incredible.

We can already see the project growing beyond its original scope. Philip Sawyers has written a staggering Fourth Symphony, which awaits its premiere in March even though it’s not part of the official project.

I have also just recorded three outstanding new symphonies by the British composer Christopher Gunning (his Second, Tenth and Twelfth) with the BBC National Orchestra of Wales. We’re in discussions about bringing new 21st-century symphony initiatives to orchestras and festivals in other countries. And the symphony is seeing a wider Renaissance in important new works by James MacMillan, Steve Elcock, David Hackbridge Johnson and others not yet connected to the project. We are in a new symphonic golden age, and it’s vital we share this feast of inspiring new music with the widest possible public. I really hope our generation can return to the concert hall a more consistent diet of works that can offer the same kind of life-changing impact for first-time listeners as a Mahler or Sibelius symphony.

Kenneth Woods is the artistic director of the English Symphony Orchestra, the Colorado MahlerFest and the Elgar Festival. Christopher Gunning’s, Symphonies Nos 2, 10 and 12 will be released by Signum Records on December 6. Matthew Taylor’s Fifth Symphony and other orchestral works will be released on Nimbus Records in spring 2020.

The ESO will premiere the next work in the 21st Century Symphony Project, James Francis Brown’s First Symphony, on July 29, 2020 at the Three Choirs Festival in Worcester.

To listen to a Spotify playlist of the composers and works mentioned, search for “21CSP for Catholic Herald” or click here