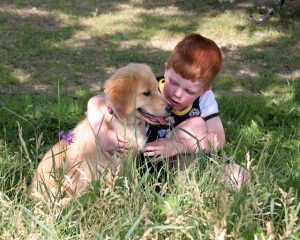 The Power of A Dog

We got a dog this week. I have been told many times how much animals can reach through the shadows of autism and bring out even the most reclusive souls. My son is very social, so I just smiled at the comments and figured there was nothing new that could happen in our world. (I also had to work myself up to getting a dog. They are work, even when you get the perfect one.) But I am here to tell you I was so wrong. 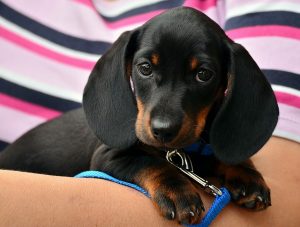 In the week leading up to our new family member, my son’s excitement was palpable. He was nearly giddy with joy! I made sure to tell him as much as I could to prepare him. We knew her name and had pictures, and I met her before we brought her home to be sure she was the right fit for us.

I even took a moment to get some extra allergy treatments for both of us in the event she was not as hypoallergenic as we were told. I knew that if she came home with me, she would need to stay, because he would be crushed it if didn’t work out. So, I did all my homework.

The day I picked up the dog, everyone at my son’s school knew that she was coming. He told everyone! My sometimes shy son was already showing me that there were very positive changes on the horizon. It’s only gotten better from there.

As an only child, he often gets lost in his own world, and no one can really pull him out of it when he doesn’t want to come. Because of this, I often let him set the pace of the day since it’s just so difficult to do anything else. We are late. A LOT. Our biggest trouble has been getting to school on time.

He will wake up on time, but then gets so sucked into his iPad or eating his breakfast at a record-slow pace that we are consistently 30 minutes late. The dog changed that. I let the dog sit next to him when we are on time… And he has been at school RIGHT ON TIME all week. I pray this wonderful change sticks.

That hasn’t been the only thing, though. He has been so sweet and gentle with the dog. (Her name is Evee.) She is small and sweet, and he is sweet right back. This sweet boy who often doesn’t know his own strength is super soft when he handles the dog. We have also struggled with getting him to be outside for any amount of time. He seems to hate the outdoors. But today he VOLUNTEERED to take the dog for a walk around the block. It was wonderful!

My son is also noticing the world around him more. He used to get so sucked into the iPad or computer games that I wouldn’t see him all day. But with Evee around, he is not so deep into it. He hasn’t been overeating like he used to, since he isn’t so absorbed. This morning, he even helped us get ready for school. I was trying to get the dog ready, so I asked him to put on his own socks. He is capable of doing it, but never does because he wants me to. But today he did it without complaining. It’s a great positive step toward his independence. This is the first day ever that he has gotten himself totally dressed for the day.

Eager For the Future

Tonight, my son wanted to spend family time together so that he could snuggle the dog instead of playing Xbox for hours. I was stunned! He even wants to go outside with the dog when she takes her potty break in the back yard. He hasn’t been back there in six months or more. I am so thrilled!

I know there will be more progress as we have the dog longer. It’s been so amazing seeing all these changes this week that I really wish I hadn’t waited so long to add this newest member to our family. I don’t know what it is about dogs, but my son is changing. He still has a long way to go, and we often have frustrations. But there is a magic in the relationship between a boy and his dog, and I’m getting to see it firsthand.

The Power of A Dog