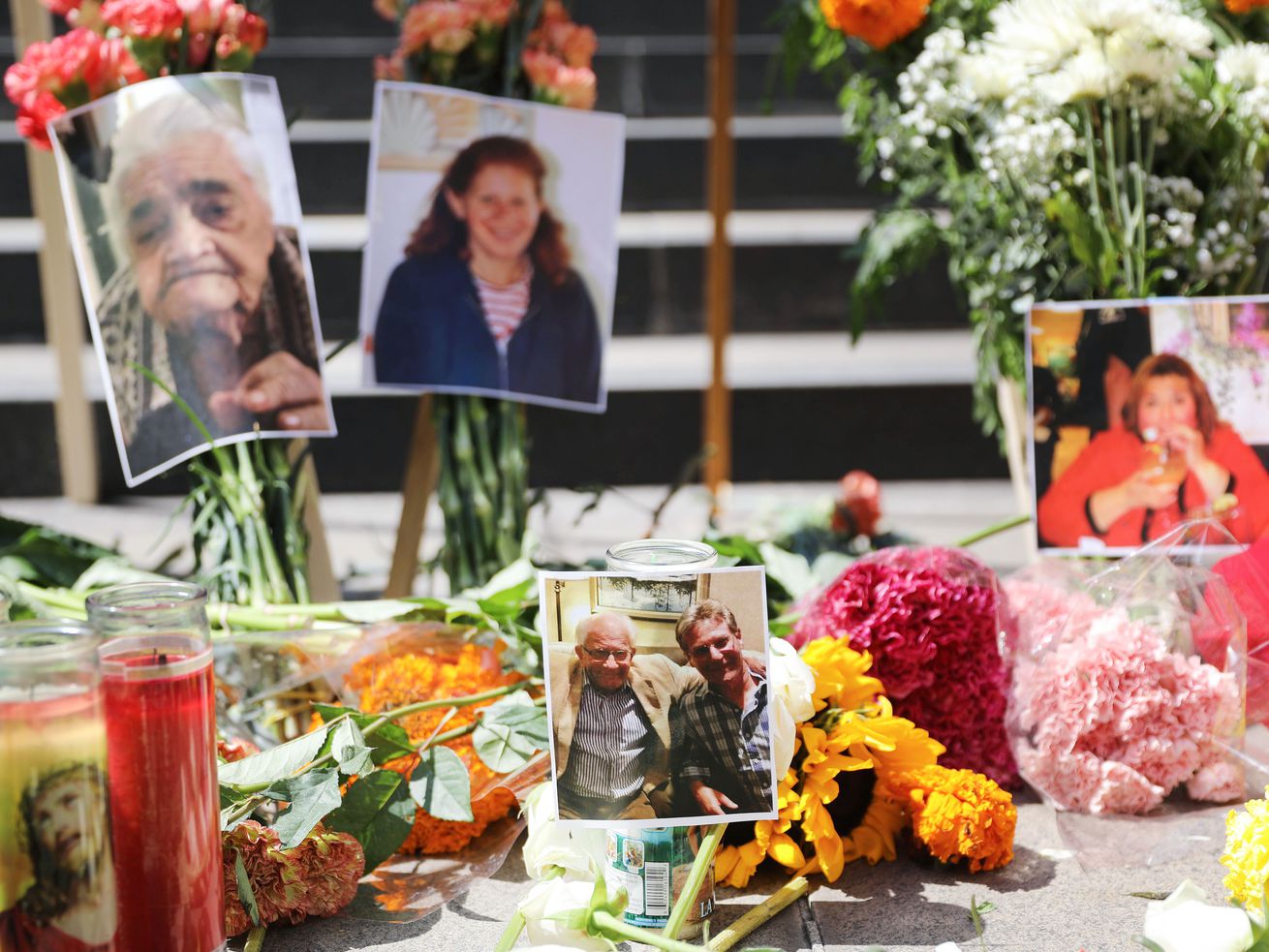 Photos of the deceased are displayed on August 31, 2020, at a public memorial honoring the 5,700 Los Angeles County residents who have died due to Covid-19. | Mario Tama/Getty Images

As the US Covid-19 death toll continues to rise (more than 183,000 as of September 1), so has the number of people who believe that the official death count is vastly inflated.

According to a July Axios-Ipsos poll, almost one in three people surveyed in the US thought the number of Covid-19 deaths was lower than what was being reported.

Some of the high-profile death skeptics, like author Alex Berenson, believe the media is deliberately sensationalizing deaths. Others note that many of these people were older and might have died during the same period anyway.

Serious question. What do you guys think the REAL #coronavirus death toll is? Under 10k?

"It means technically even if you died of a clear alternate cause, but you had COVID at the same time, it’s still listed as a COVID death." pic.twitter.com/2fiqCX3QAx

Then came a new claim that went viral over the weekend: that only 6 percent of US pandemic deaths have been from Covid-19 itself. The origin was a statistic from the Centers for Disease Control and Prevention that 94 percent of people killed by the new coronavirus in the US had comorbidities, or other health conditions contributing to their cause of death.

Although assigning causes of death isn’t straightforward, disease experts and scientists have quickly taken to Twitter and TikTok to point out that the 6 percent figure has been wildly misinterpreted.

Been seeing folks discuss the "6% only died of COVID-19 alone", and thought I'd have something productive to add since I'm an HIV virologist by training.
After years of virus spread, and in the absence of treatment, a patient infected with HIV will develop AIDS. (1/4)

In addition to their efforts to refute attempts to downplay the death numbers, public health experts have consistently noted that official Covid-19 death numbers are likely undercounts of the true toll of the virus.

So why has this misguided perspective about inflated death counts gained traction? Aside from the proliferation of misinformation about Covid-19, one important reason may be that we think we’re better at reasoning about causes and effects than we are.

In many cases, we are pretty good at causal reasoning — when a rock flies through a windowpane, even a young child can tell you what caused the window to break. But when we’re faced with the sorts of complex causal relationships found in the economy or the human body, our intuitive causal reasoning tools aren’t up to the task.

In these cases, we rely on mental shortcuts that can lead to reasoning biases of the sort that might make a Covid-19 skeptic’s argument about the “true” causes of death sound a little reasonable, even if we know it’s wrong.

Let’s take a closer look at why that is — and what we might be able to do to overcome these biases.

Counterfactual thinking: Would these people still have died soon if they hadn’t contracted Covid-19?

Imagining that older people or those with preexisting conditions likely would have died in the near future anyway, even if they hadn’t contracted Covid-19, is an example of counterfactual thinking: imagining an alternate reality in which something happened differently. Counterfactual thinking is one of our most valuable tools for identifying causal relationships.

It works like this: If an outcome didn’t happen in a world where a potential cause didn’t happen, then the potential cause must have been responsible for the outcome. If the rock didn’t get thrown, the window wouldn’t have broken; therefore, the rock must have caused the window to break. In simple situations, this view is sensible, and research suggests that it’s generally consistent with people’s judgments about causes.

But this view quickly runs into problems. Suppose Veronica and Logan both threw rocks at the same window at the same time. Did Veronica’s rock cause the window to break? According to the counterfactual logic, no, because if she hadn’t thrown a rock, it still would have broken due to Logan’s rock. But the same reasoning applies to Logan’s rock. Yet the window did break. Something must have caused it.

This rock case is somewhat analogous to the situation surrounding Covid-19 deaths. In both cases, we have two potential causes — say, heart disease and Covid-19 — each of which might be sufficient to explain the outcome. In the rock case, you could say that the rocks together caused the window to break, or that each rock is equally a cause.

Why do some people not reach the same conclusion with Covid-19 deaths — that both heart disease and Covid-19 could be causes?

One clue comes from a 2011 experiment by psychologists Clare Walsh and Steven Sloman. They had 43 subjects read stories in which something happened that had two potential causes: One cause was like Veronica throwing a rock, and the other was like if a third person, Wallace, stepped out of the rock’s path to allow it to hit the window. Here, following the logic of counterfactual thinking, both Veronica and Wallace were causes. But only Veronica’s action involved a mechanism that you could expect to break a window.

How does this relate to judging causes of death? We have lots of familiarity with people dying of heart disease, but we know comparatively little about Covid-19. When imagining two potential causes of death, people already have a plausible mechanism to explain how someone died if they had a well-known disease, which could make it seem more causally responsible than Covid-19.

But just like Veronica’s rock wouldn’t have broken the window if Wallace hadn’t stepped aside, many people with heart disease likely wouldn’t have died as soon if they hadn’t contracted Covid-19.

Another bias we hold is a preference for simpler explanations — that is, explanations that invoke fewer causes to explain why an outcome happened.

For example, in a 2007 experiment by psychologist Tania Lombrozo, 48 subjects read about an alien experiencing two different symptoms: sore “mittels” and purple spots. They then learned about three medical conditions: Morad’s disease caused sore mittels only, a Humel infection caused purple spots only, and Trichet’s syndrome caused both symptoms. Thus, the alien’s symptoms could be explained by Trichet’s syndrome, or a combination of Morad’s disease and a Humel infection.

Perhaps unsurprisingly, 96 percent of subjects found Trichet’s disease to be the more satisfying explanation for the alien’s symptoms. My collaborators and I found similar results in a study that is currently undergoing peer review. We found that, in some contexts, subjects preferred simpler explanations — those that invoked fewer reasons — for why other people took certain actions.

But sensible doesn’t mean always right. Sometimes the alien really does have Morad’s disease and a Humel infection. And when we’re dealing with different types of causes, like acute causes and contributing causes, we’re likely to deceive ourselves about which explanation makes more sense if we weigh two causes of death against one.

The role of motivated reasoning

We’re all susceptible to these biases, but we’re not all Covid-19 skeptics. That’s because people with different base beliefs will end up approaching new information with different attitudes.

This process is known as motivated reasoning, and it leads people to gather evidence that supports perspectives they already agree with and to more thoroughly scrutinize evidence that challenges those perspectives. Someone who believes the pandemic is a serious threat will likely accept the official Covid-19 reports at face value. But someone who is already skeptical about the pandemic for other reasons will be predisposed to look for reasons to question the death counts. And due to these biases, they’ll happily find several seemingly commonsense reasons quickly at their disposal.

This cognitive pitfall isn’t limited to Covid-19 skeptics. Even non-skeptics have been guilty of overzealously shaming people for doing things like going to the beach, even though current evidence suggests it’s a low-risk activity.

To help avoid these sorts of reasoning errors, remember that the world is complicated, and our intuitions — especially about complex causal relationships — can’t always be trusted. It might seem intuitively wrong that someone’s death had multiple causes, or that it’s madness for hundreds of people to head to the beach during a pandemic, but it might be your intuition that’s wrong.

Alan Jern is a cognitive scientist and associate professor of psychology at the Rose-Hulman Institute of Technology.

Help keep Vox free for all

Millions turn to Vox each month to understand what’s happening in the news, from the coronavirus crisis to a racial reckoning to what is, quite possibly, the most consequential presidential election of our lifetimes. Our mission has never been more vital than it is in this moment: to empower you through understanding. But our distinctive brand of explanatory journalism takes resources — particularly during a pandemic and an economic downturn. Even when the economy and the news advertising market recovers, your support will be a critical part of sustaining our resource-intensive work, and helping everyone make sense of an increasingly chaotic world. Contribute today from as little as $3.