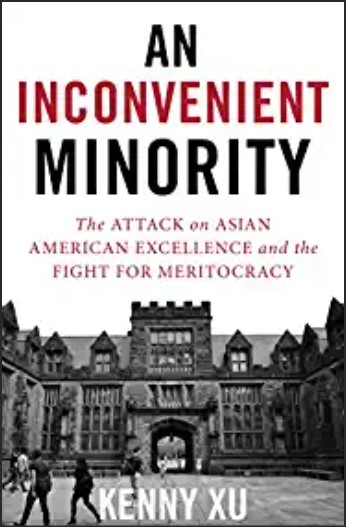 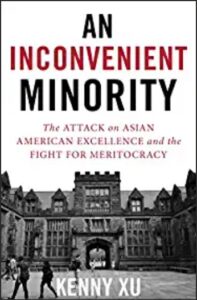 The following post has been extracted with permission from the book, “An Inconvenient Minority: The Attack on Asian American Excellence and the Fight for Meritocracy.”

There were just too many Asians.

Thomas Jefferson High School for Mathematics and Science in Arlington, Virginia, is widely considered the best high school for math and science in the region. It is the number one ranked high school by the U.S. News and World Report in the entire nation.

“That place is so difficult and so rigorous, that you’re just beaten,” said Asra Nomani, the Indian American mother of a Thomas Jefferson student. “You don’t even know if you’re going to make it, like as a family, because your child is slogging so much. And I have issues with that because they almost crush the passion of math and science out of you because they are just so rigorous, so hard. …”

But starting in the 2000s, the composition of the class of Thomas Jefferson changed. It got more Asian. Way more Asian. The reasoning for this change was pretty simple: Asian immigrants started pouring into Northern Virginia in the ’90s. They got married and had kids. In the new millennium, those kids were reaching high school age. And they were studying to go to TJ.

In 2020, Thomas Jefferson accepted 486 students from a pool of 2,539 applicants. Seventy-three percent of those admitted were Asians.

It’s not as if Fairfax County Public Schools was failing its students in terms of classroom rigor. In 2013, FCPS required all eighth-grade students to take Algebra I, the culmination of teacher and individual school-led efforts to boost the region’s proficiency in math. Surging ahead of this requirement, more schools and parents moved to have their kids take Algebra I in seventh grade—and some even in sixth. The standards at FCPS, at least in math, have increased for all students over the past twenty years.

But even with the increased standards, Asian kids still were doing better at math. There was no real secret to it: The Asian American parents moving into the area were simply investing more in their kids’ math education from an early age.

“Parents want their kids to be moving along at the pace that they can handle,” Asra said about her own community. “[My son] ended up ready to take Algebra I in seventh grade.” Asra had enrolled her son in gifted math in elementary school. And she made sure to keep him on track—she even homeschooled him for a year so he could get the enrichment he needed. You can call Asra what you want—overly ambitious, authoritarian, not a “well-rounded” parent. But the bottom line was that her son was excellent at math, and so were many other Asian American sons and daughters in Fairfax County. As Asian Americans continued to move into the district, they increased their advantage for spots at the math- and-science-focused Thomas Jefferson High School admissions.

Fairfax County had long yearned for more minorities to fill TJ’s spots—just not these minorities. For thirty years, Fairfax County’s entrenched school board had been hankering for more Black and Hispanic kids in TJ’s programs. They tried everything to get them in: Enrollment outreach programs. No effect. “Holistic admissions.” No effect. Fairfax County even tried admitting more low-income students into the “TJ pipeline” of middle-school gifted and talented programs, drastically increasing the number of Black and Hispanic students in these middle-school gifted programs from 3 percent to 15 percent of all students in those demographics. That had the opposite effect—watering down the rigor of the nongifted middle school Honors courses caused the number of schools who sent fewer than ten students to TJ to increase from ten to eighteen. And all the while, Asian American students continued to dominate admissions to TJ. The school board was livid. How could they accomplish their diversity goals if these Asian immigrants and their children kept taking all the good spots?

Then, George Floyd was killed.

Across the nation, “wokeness” became a household concept, and a national conversation erupted over the role of systemic racism in every part of American life. And you can bet education was not left undiscussed.

In the wake of the country’s racial reckoning and shortly before the school year began, the Democratic Party blog BlueVirginia wrote, “ZERO African-Americans were accepted into TJ” in 2020. Washington Post reporter Hannah Natanson wrote an article highlighting the issue, and it became a local sensation. (The claim itself is untrue—attributable to a publishing error in the original statistics. Although the number of Black students accepted was low, it was not zero —it was six.)

Kendi spoke in vague generalities, decrying “systemic racism” and stating that “we need to create a system where no one’s money will give them more opportunities.” But he didn’t need to be coy; with one look at his book, thousands of which were bought by Fairfax County Schools, anyone can parse how he feels about the education system and how he would characterize the TJ admissions process that leaned heavily on the standardized test:

“The use of standardized tests to measure aptitude and intelligence is one of the most effective racist policies ever devised to degrade Black minds and legally exclude Black bodies.”

With Kendi functioning as their woke cheerleader, Fairfax County decided to overhaul their entire admissions process, to force more Black and Hispanic kids to come to TJ. “I believe our country—in the middle of the pandemic and after the murder of George Floyd—has reached a moment where we have to with a fresh perspective to relook at equity in everything we do. We’ve had an over 25-year conversation about [improving] TJ admissions,” FCPS Superintendent Scott Brabrand said in a town hall about TJ’s admissions process. “I do believe it’s time to do something other than the status quo.”

So the school board put forth the most drastic admissions policy they had ever done in the history of Thomas Jefferson High School: They created an admissions lottery. Yes. A lottery. For admittance to the number one high school in the nation.

Under the new lottery, “merit” admissions would be reduced to 100 of the 480 spots. The rest would go to any students scoring above a 3.5 GPA and with the required courses, by the luck of the draw. The proposal was drawn up to “increase diversity” and to allow TJ to “reflect the diversity, equity, and inclusiveness that is core to the mission and values of Fairfax County Public Schools,” said Superintendent Brabrand.

At least, that’s one way of seeing it.

The problems of too few Black and Hispanic students in even the semifinalist rounds of admissions are problems of the entire condition of low-income Black and Hispanic education, problems that cannot be fixed or solved with racial quotas at one school—that can only be masked, not solved, with the artificial propping or boosting of certain races’ admittance into the school at the expense of people who are more qualified. Rather, solving these problems requires addressing them at every level of education—not putting promising but underqualified Black and Hispanic students through the meat grinder that is Thomas Jefferson High School for Mathematics and Science.

But the chattering class governing the county did not want to hear this logic. They would rather believe that everyone would be equally meritorious and pretend that one can artificially increase racial diversity with no negative consequences.

The counterproposal—the antiracist proposal—to TJ’s test and grade-based admissions was implemented in October 2020, calling for a “merit” lottery of admissions where anyone who crossed a minimum threshold would get an equal chance for admissions to the most excellent high school in America.

The issue is that the board of education gets to decide the “minimum threshold.” They decided initially that the lottery was going to be open to anyone with a minimum 3.5 GPA. The school board’s own analysis for this merit lottery predicted an upsurge in Black, Latino, and white admitted candidates. The Asian population, on the other hand, would drop by a projected 27 percent. A parents’ coalition analyzed the data and found a steeper drop: 55 percent for Asian students. In contrast, the white population would shoot up to 45 percent of the total student body. And the Black and Hispanic representation would both remain in the single digits.

What if restructuring TJ admissions wasn’t just about increasing Black and Hispanic admissions? What if something more sinister was going on?

A 2013 study of white Californians found that when white people were told about Asian American success on standardized tests, their support for standardized tests fell significantly. An ominous possibility emerges: The school board’s radical transformation of the admissions process, publicly justified in the name of racial representation and antiracism, was latently a sort of envious clapback from wealthy, elite parents against the Asian American takeover of their schools.

Consider, for example, a favorite term of today’s liberal elites: diversity. “When it comes to ethnicity statistics, it becomes blatant that there is no such concept of diversity at Jefferson,” wrote high schooler Sonja Kachan about TJ admissions. “As stated before, Asians make up close to 68 percent of the student body, followed by Caucasians making it 21 percent.” To these students at TJ, fed diversity ideology from their diaper-wearing days, Asian identity is not diverse. Why? Because there are just too many of them.

In the messaging of woke students and the woke school boards propping up their ideas, the writing on the wall is clear: Asian students can be sacrificed—but that’s okay, in the name of diversity. Mind you, it did not matter that these Asian students put hundreds of hours of work into their academic careers, sacrificing a social life to give themselves the best shot to enter a school known for its brutal work hours. That depth and breadth of dedicated effort was to be lapped up and framed as “test prep,” or “privilege.” Virginia education secretary Atif Qarni called preparation for the TJ admissions exam the equivalent of “performance-enhancing drugs.” Studying for the test was comparable to sticking steroids into your body the day of a wrestling meet. Never mind actually cheating, a real epidemic across the nation’s high achieving public schools. Extra-curricular work and simply studying for tests was labeled in those same denigrating terms.

How did we get to the point where it’s morally okay, even encouraged, to justify halving the Asian American population at a popular gifted school, labelling them cheaters and test-preppers? Would this at all fly if “Asian American” were replaced with “African American”?

Such a question gets at the heart of this battle over Thomas Jefferson High School in Fairfax County, Virginia. Who are the people considered “minorities” in the Left’s America? Who will get privileges doled out to them in a woke world? What does “diversity” really mean if Asian Americans are not included?

Or does anyone question the most fundamental consequence of it all—the fact that a “merit lottery” will inevitably result in a drastic decline in overall school performance? The simple mathematical facts beget this utterly logical conclusion: If before you selected the most meritorious in rank order and now will select from a lottery of students above a lower cutoff point, you sacrifice one immediate, clear principle that powerfully distorts the overall excellence and reputation of your school, your community, and your world.

That principle is meritocracy.

A second-generation Chinese-American, Kenny Xu lives in Northern Virginia. He is president and primary spokesman for Color Us United, a nonprofit organization countering claims that America is a hateful country.