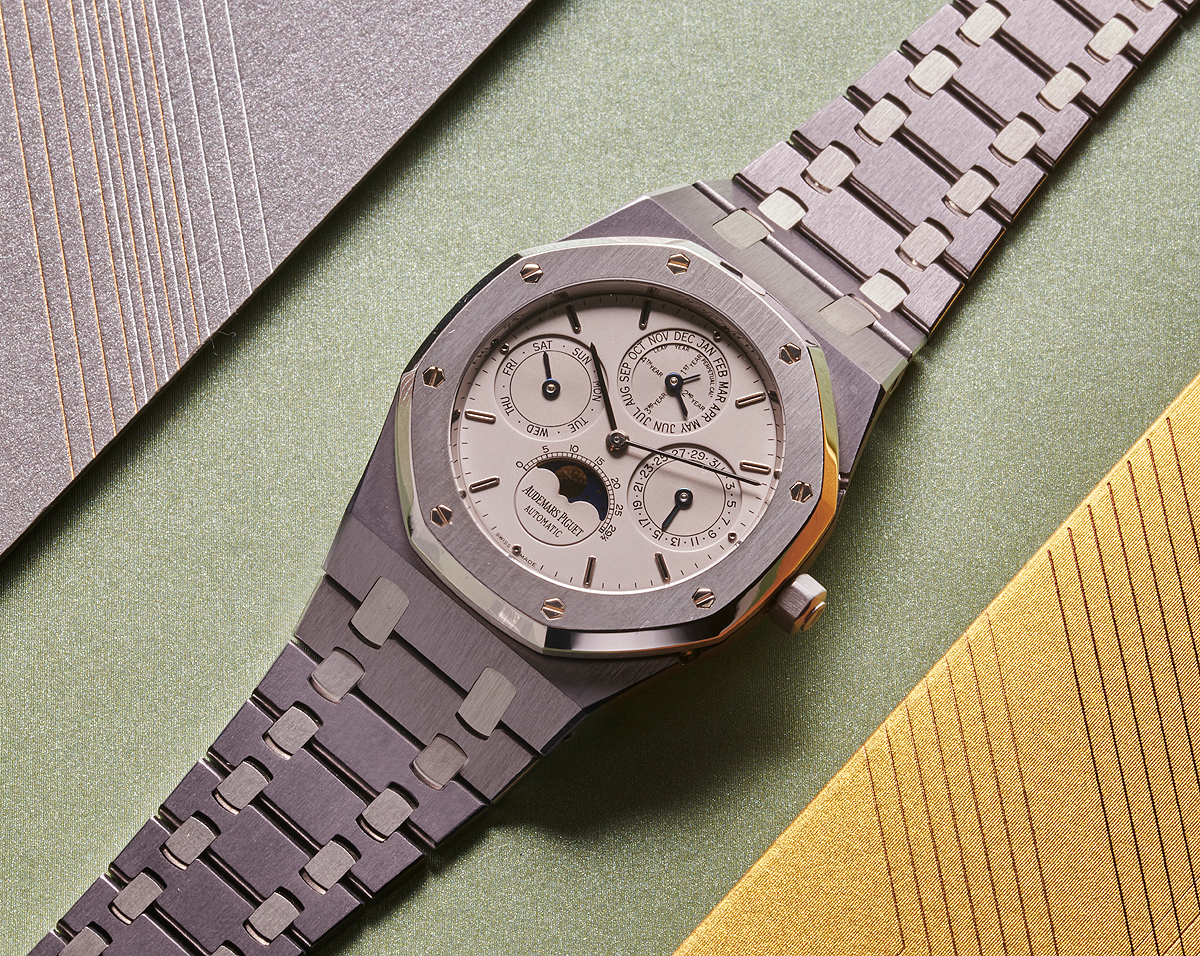 The two-day auction, which will be hosted in Zurich and accessible online, begins on November 20, with a main auction offering modern, vintage and pocket watches from 1:00 PM (Zurich time) to 3:00 PM, followed by the special “Alchemy of Gold” auction of gold wristwatches that begins at 3:30 PM. Another main auction, on November 21 from 1:00 PM to 3:00 PM, will showcase modern watches and will be followed at 3:30 PM by “Shades of Gray,” a special auction of timepieces produced in tantalum, platinum and steel.

Notable among the rare and highly sought-after timepieces at the auction are twin Vianney Halter pieces, the Antiqua Yellow Gold (estimated at CHF 50,000 – CHF 100,000) and Antiqua White Gold (CHF 50,000 – CHF 100,000), which caused a stir when the independent watchmaker revealed them in 1998. Halter’s Antiqua line, which is described as “Relic of the Future Past,” is designed to embody the “spirit of the marine chronometers, linking antique time instruments to the contemporary collector’s wrist.” The watches offer a quirky interpretation of the perpetual calendar that allows the wearer to read the hour and minutes, month, leap year, day of the week and date via four riveted portholes in decreasing order of diameter.

The “Alchemy of Gold” title for the special auction references medieval alchemists’ efforts to transmute base metals into gold and thus achieve immortality for them. Accordingly, the gold watches in the auction are by esteemed watchmakers such as Audemars Piguet, A. Lange & Söhne, Patek Philippe, Girard-Perregaux, Vianney Halter, Tissot, Daniel Roth, and Vacheron Constantin — all of which have created timepieces for the ages.

Similarly, the “Shades of Gray” auction derives its name from the gray colorways of the collectible timepieces under the hammer, which comprise high-end complications from maisons including Audemars Piguet, Patek Philippe, Breguet, F.P. Journe, Vianney Halter, Konstantin Chaykin, and Urwerk

Notable among the “Shades of Gray” lots are three extremely rare pieces by French watchmaker F.P. Journe. The F. P. Journe Chronomètre à Résonance Ruthenium Collection (CHF 200,000 – CHF 250,000) is one of 99 pieces presented from 2001 to 2003. Purchased in 2002, the watch has a case in 950 platinum, a matte-textured, solid gold dial with dark grey ruthenium coating, and the unique hand-wound Résonance Caliber 1499.3. The collection was the last of Journe’s production of movements traditionally made from brass with galvanic coatings.

The second Journe piece, from the Tourbillon Souverain Ruthenium Collection (CHF 100,000 – CHF 200,000), numbered and limited to 99 pieces, features the Caliber 1498, the movement that helped the brand make its mark in watchmaking in 1999. Importantly, only 520 Tourbillon Souverain watches were ever produced, including those in the Ruthenium Collection.

Finally, the F. P. Journe Chronomètre Souverain de Boulle (CHF 50,000 – CHF 100,000) on offer is one of the rarest versions of that model. Delivered exclusively to Dallas retailer de Boulle Diamond & Jewelry in 2007, only eight pieces were made, along with two more for owner Denis de Boulle and a director. This piece belonged to the owner.

Meanwhile, Audemars Piguet fans will be excited about the Royal Oak Perpetual Calendar Ref. 25820TP (CHF 100,000 – CHF 200,000) in platinum and tantalum, the rarest version of this model, which will be featured at the auction. From a limited edition of only 15 pieces, its characteristic feature is its matte-finished, non-tapiserrie dial, and it is powered by the ultra-thin self-winding Caliber 2120/2802, which was developed in 1995 as a sophisticated version of the original Caliber 2120/2800 with the addition of a leap-year indicator.

Also from Audemars Piguet is the Star Wheel Automatic Ref. 25720, hailing from a collection whose dials were hand-engraved with a guilloché plate. Such dials were not common at the time, especially in watches with platinum cases such as this one, ranking this timepiece as among the rarest of its kind. It was released in a limited edition of only nine pieces, which is indicated at the bottom of the dial (9/9) — making it also, the auction house says, possibly the only Audemars Piguet model that features a limited-edition number on the dial.

Ineichen Zurich hosts only three auctions per year, traditionally in May and November, so this one is not to be missed (you can view all the lots here). The auction house currently ranks second on sales among Swiss watch auction houses and has achieved several lot records over the decades. Nevertheless, the May 22, 2021 auction not only smashed the previous sales record but marked the sale of the world’s most expensive NFT token for Konstantin Chaykin’s Joker NFT Fr. 52080.