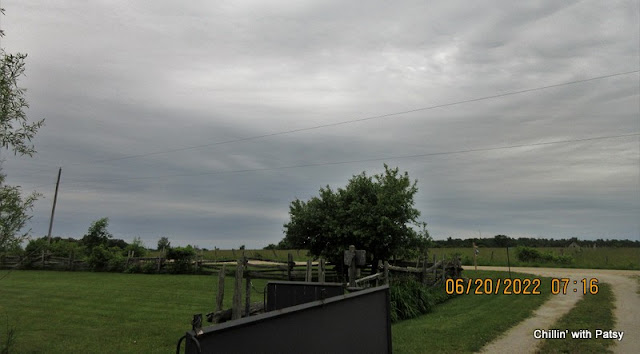 On Monday, June 20th Bill didn’t have to be up too early since his work was just down the road again. Gibbs and I went for our walk returning on time to see Bill leave. He left just before 8:30 after taking the garbage out to the road. I sat with Gibbs and played Wordle while finishing my tea.

It was a strange day out there. We don’t know if it rained overnight but things were dry showing evidence that it didn’t. All the warnings for it didn’t pan out but maybe today we’ll see some. I’m hoping not to need to water the plants. At 9:30, I drove to M’s for my own work. First 4-hour shift. 😉 They were easy errands today, since the Chev is almost ready for priming and painting.

I did some secretarial stuff, cut some rags (which we use a lot of), and made a run to town for Petunias for his flower boxes.

I left for lunch at noon and returned 30 minutes later for the last hour and a half. It was a great day! I cut more rags and did the final hand sanding on the new truck hood that M got for the Chev. The time went quickly. Back home, Gibbs and I ‘chilled’ together inside and I cut the bundle of rhubarb into bite-size pieces for freezing. Well, I had to make something so got a recipe from Donna that fit the bill. Yum.

Bill was home at a decent hour, which is nice about him working so close, and after a cat nap he went up and started on my garden fence. Woops! 25’ isn’t enough to go all the way around so I’ll try and pick more up tomorrow.

I made our dessert while he did that. There was no rush so he went to eh Hangar until I texted that the Weber was lit. He grilled sausages for supper and inside I baked the crisp and cooked pepper squash. I skipped the bun and enjoyed my carb-free meal. 😊

Bill loaded the dishwasher and we chatted with Marilynne, Bill’s step-Mom, to catch up. It’s been a while since we talked to her and it was a nice conversation. Bill went back to his planes and I sat to write my blog.

The sun has come out in full glory, why it waited so long, who knows? We did get a downpour of rain this morning around 11:30 but it only lasted about 2 minutes if that. This has been a great day for Bill too.

Thank you for your visit at the start of yet another week! Summer begins tomorrow!