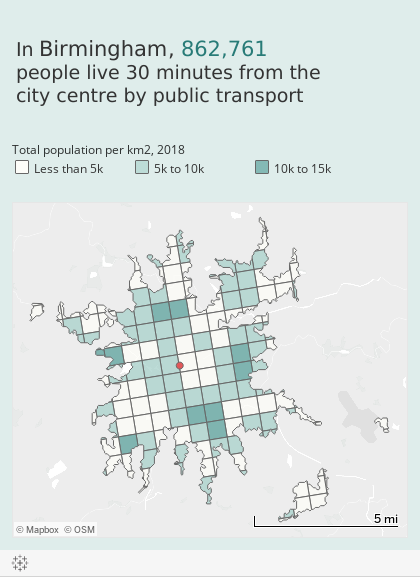 A plan to fix public transport in Birmingham

Public transport in big European cities is better than in large British cities. While 66 per cent of residents in European large urban areas can reach their city centre in 30 minutes, only 40 per cent can in Britain.

Closing this gap is key to levelling up, as improving accessibility to Britain’s large city centres outside London will increase the size of their local labour markets and deepen agglomeration effects, in turn improving economic performance and living standards

Birmingham is much larger than Munich, but far fewer people in Birmingham can reach the city centre in 30 minutes than Munich

Birmingham and Munich are both two of the largest and most important cities outside their capital, and both are global centres of the automotive industry. However, while Munich is the most productive large city in Germany, Birmingham is less productive than the national average.

One reason for this (among several, including differences in skills) is that Birmingham’s booming city centre is much less accessible in a reasonable commute by public transport. Figure 1 shows that even though Birmingham has 1.1 million more residents than Munich, the German city actually has 200,000 more residents within the urban area that can reach city centre in 30 minutes by public transport.

Figure 1: Birmingham’s effective size is lower than Munich despite having 1.1 million more residents

Only 34% of Birmingham’s population can reach the city centre in 30 minutes or less, whereas in Munich it’s 73%.

This does not only have the expected consequences for the environment or social inclusion. The poor public transport accessibility damages Birmingham’s economic performance by capping the potential size of the city centre’s growing labour market. Road congestion for city centre commutes for an urban area of Birmingham’s size is a tight bottleneck, and public transport’s biggest potential economic benefit is increasing the capacity of city centre commuting.

Figure 2: The main difference between the two cities is not the size of their respective networks but the number of residents within them 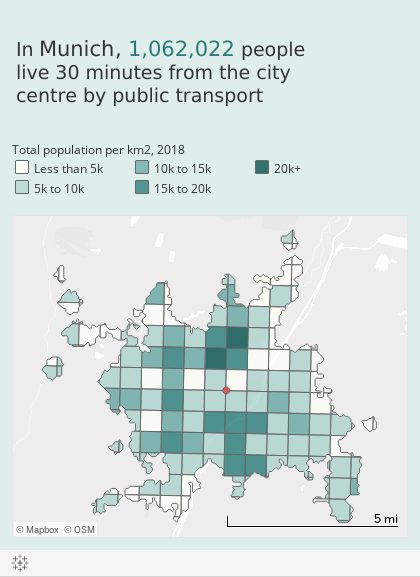 The reduced convenience of public transport reduces demand and means people vote with their feet and get in their cars – in 2011, 16 per cent of Birmingham’s residents commuted by public transport, while 33.5 per cent did in Munich in 2012.

The reason Birmingham’s population density is lower is because it has such a low-rise urban form. Figure 3 shows that, in contrast, Munich, like most European cities, has a much more mid-rise built form and apartment living is more common.

Birmingham’s predominantly terraced and semi-detached housing instead prevents people from living within walking distance of the city’s extensive public transport network, and damages Birmingham’s economy. Even the quantity and quality of service is affected by this. If changes to the built form boosted demand for public transport, then the frequency and the quality of the journeys could be improved.

Figure 4: Without changing its built form, Birmingham would have to double the size of its public transport network to achieve the same accessibility as Munich 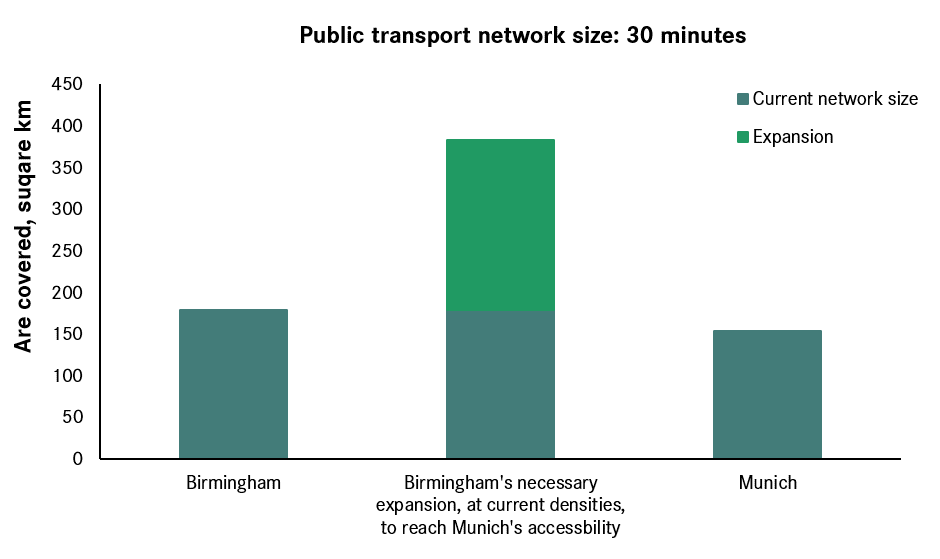 The size of such a network would be much larger than those of London and Paris – without the densities these cities have that provide the customer demand to operate such large systems at the quality and affordability they do.

Birmingham must improve the supply and demand for public transport

Of course, transport isn’t everything. Munich also has a much better qualified population than Birmingham, but’s that’s the subject of another blog.

As Birmingham’s economy grows though, it will need to expand its public transport network to keep pace. To achieve the best transport outcomes, Birmingham’s urban form needs to change too.

Central government funding on regeneration – including the Brownfield Housing Fund in the Levelling Up White Paper – should be seen partly as transport funds that achieve better transport outcomes by changing the built form of existing urban areas. Awards for regeneration funding and new transport funding should be tied to commitments from local authorities to increase densities along new and existing public transport infrastructure.

Local authorities do currently find it challenging to shift areas from a low-rise to a mid-rise urban form, primarily thanks to how the existing case-by-case planning system blocks new homes. However, they do have the power to use Local Development Orders that would remove many of the barriers they face when trying to redevelop land near existing public transport.

Local authorities in England should also release parts of the green belt next to stations for ‘button development’. Previous Centre for Cities estimates show that at least 208,280 homes could be built around Birmingham even at existing low-rise density levels.

Birmingham can improve its public transport network and it can use a new network to boost local prosperity. However, boosting the demand that a new network would need depends on changing the city’s built form – with some neighbourhoods embracing mid-rise living.

The post A plan to fix public transport in Birmingham appeared first on Centre for Cities.

A plan to fix public transport in Birmingham