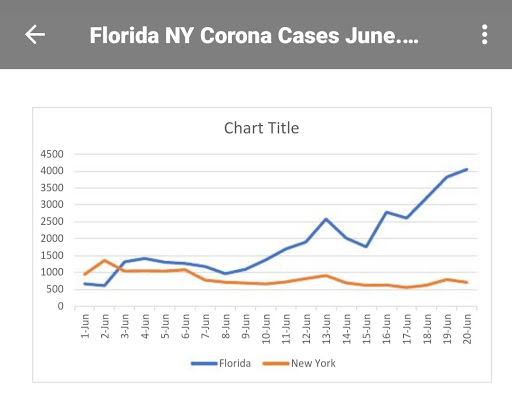 A Potentially Ominous Development for COVID-19 in the United States

While it was only this past winter, it seems almost ages ago when COVID-19 first emerged on the world stage.  One of the hopes being bandied about, even by President Trump, was that coronavirus would go away as temperatures got warmer.
Now we are seeing that hypothesis being tested in real time.
With roughly similar population sizes, the states of Florida and New York have had very different experiences with COVID-19.  New York, particularly New York City, saw a tremendous surge in new cases in mid-March, and rarely had a day with fewer than 4,000 new cases from March 22 through April 30.  Meanwhile, Florida, with a slightly larger total population, rarely experienced more than 1,000 new cases per day as late as June 2.  However, starting in early June, there has been a radical change in the numbers of new cases the two states are reporting, and this line graph chart I prepared pretty much tells the story: 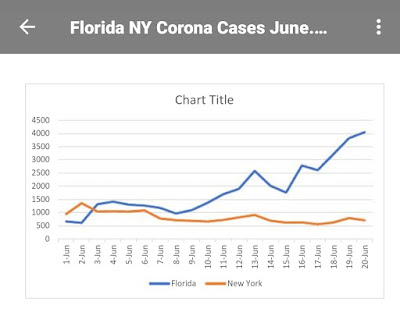 Beginning on June 3, Florida started to surpass New York in new cases.  Still, it was not by a significant margin, and as you can see in the chart, the difference in the numbers is not that much.  But since June 9, Florida has seen a noticeably upward trajectory in new cases, while New York continues to trend lower and the gap between them widens.
One thing's for sure, these developments should put to bed any hopes that COVID-19 would disappear in the summer heat (Florida being a southern state, experiences New York summer temperatures in early spring).  Hopefully Florida will hit its peak soon and the numbers will go back down again.  Only time will tell.
About a month or so ago, conservatives were comparing New York and Florida's Coronavirus numbers as evidence that Florida's governor Ron DeSantis was handling the outbreak much better than New York's governor Andrew Cuomo, as New York has a roughly comparable population.  However, the Coronavirus game is not over yet, and it may be too early for DeSantis to start running a victory lap.
Source: anexerciseinfutility

A Potentially Ominous Development for COVID-19 in the United States