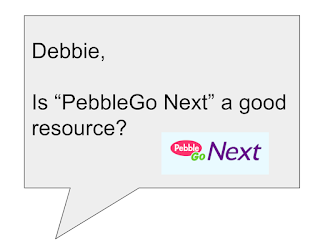 A Second Look at PebbleGo Next

On December 2, 2016, I took a look at "PebbleGo Next" (an educational website for early childhood) because AICL readers had been writing to ask me about it. Based on what I saw on the Pueblo pages, I decided I could not recommend PebbleGo Next. My major concerns were that the site did not use "nation" and that the site's content was presented using past tense verbs which contributes to the idea that we no longer exist.
One of my concerns was that they had used the word "cultures" in their categories. For example, the site said "Southwest Cultural Area." Categorizing Native peoples as cultures or cultural groups is a typical error. We are--of course--people with distinct languages, stories, religions, housing, clothing, but the single most important fact about us is this: we are sovereign nations. No other cultural groups in the U.S. have political status. No other cultural groups have treaties with the U.S. government (some tribal nations had treaties with European governments, too. See for example, the Gäsweñta’ (Two Row Wampum) information about the Haudenosaunee and the Dutch.)

Instead of "cultures," the best word to use is "nations" (or nation when the focus is on a single tribal nation). Editors at PebbleGo read my review and made some changes--but they are superficial. Let me explain by walking you through some of what I see today (January, 2022).
Instead of "Southwest Cultural Area" the category is now "Southwest Tribal Nations." When you click on it, this is what you'll see: 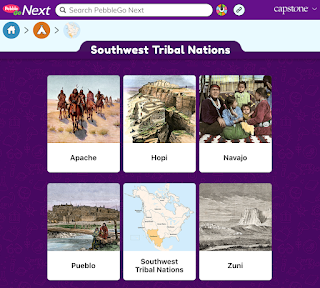 Clicking on "Southwest Tribal Nations" in the array (it may look different on your screen depending on how wide your browser window is), you'll get an overview grouped in these sections: Introduction, History, Geography, Communities, Cultural Characteristics, Housing, and Food.
In the Introduction, there are two paragraphs. They both start out with "Southwest culture area." The introduction says that the area "is home to several American Indian groups" and it says they include Navajo, Apache, Pueblo, Hopi, Zuni, Tohono O'odham, Akimel O'odham, Upland Yumans, and River Yumans. There is no mention of them as nations. That's what I mean about superficial changes. Substituting the word on the category page is easy to do. That's a cut and paste task. Making substantive change is harder to do--but necessary!
In the History section, there are four paragraphs. I don't see the word nation anywhere there. "Groups" is PebbleGo's word of choice in this section. Some information is incorrect. It says that the U.S. government forced all of the Southwest Indian peoples onto reservations, but in fact, some of us are living on the same homelands that we were living on prior to European invasions. Reservations were established and removals did happen, but overly broad information like what I see here mis-educates children.
In the Communities section, I finally see the words nation/nations, but it is used in an inconsistent way.  This section uses "Akimel O'odham nation" and "Apache" and "Chiricahua and the Mescalero" and "the Hopi nation." Why not use it with Apache, Chiricahua, and Mescalero? In the third paragraph of this section, I see

Kudos for using nation, but when the word appears with a specific nation, a capital letter is necessary. Style guides and scholars use a capitol N. It should therefore be "Hopi Nation."  The last sentence in that excerpt is also a problem. I wonder about the source for it? I think the Pebble go editors mean to say that people have a strong affinity for the place they live. Some of you reading this review have strong feelings about your hometown and might not have the same warmth for your state.  As written, that sentence is a problem because it undermines the significance of the Hopi Nation's sovereign status. Why include that sentence in the first place? I don't think the editors mean to undermine nationhood, but I think that sentence does that very thing.
There are two paragraphs in the Cultural Characteristics section. Both are about languages. The opening sentence is "Southwest Indians spoke many different languages." Use of "spoke" rather than "speak" suggests the languages are no longer spoken--and while language loss is an issue--many do speak their language and/or are involved in language projects to teach it to others. For the most part, those two paragraphs use present tense verbs.
In the Housing section, all four paragraphs use past tense verbs. In fact, Pueblo people--today--build our homes using adobe bricks. Over the course of his life, my dad made thousands of adobes. I've got a wonderful photo of him doing that with his parents when he was a kid, and I've got a photo of my daughter doing it with him, when she was a kid. He built four adobe homes.
In the Food section, all the paragraphs are in the past tense. We still farm. Navajo people still raise sheep. Though most of us buy meat at the local grocery store, some of us continue to hunt deer, rabbit, and antelope.
The last observation I have about the overview page is with regard to the illustrations. There are seven. Five show Native people, but they are all shown in a past tense setting. Captions are also in past tense, and the placement of the illustrations doesn't make sense. Here is a screen capture from the Communities section that helps make my point: 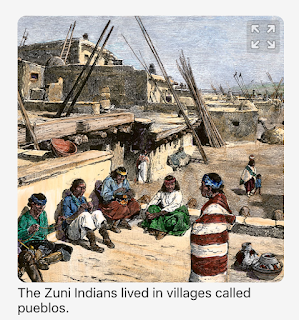 Why is it there? The content of that particular section does not mention the Zuni people. A better choice would be an illustration of a Hopi village of the present day.
When I did my first look at the PebbleGo site, people there wrote to me, nothing the significance of my review and that they were making changes. As noted above, I think the changes are superficial. One thing that I do recommend at their site is the "American Indians Today" page that you can see when you click on the American Indian History page. It is the one on the top left, below: 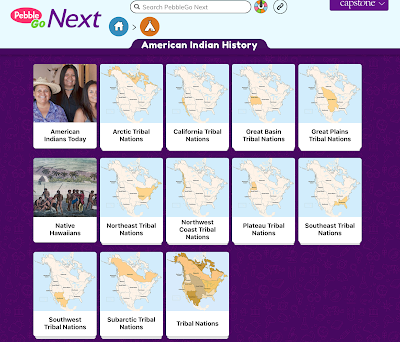 Clicking to that page you'll read terrific information written by Dr. Karina Phillips. She is a professor at Macalester College in St. Paul, Minnesota, and a member of the Red Cliff Band of Lake Superior Ojibwe. Her knowledge and identity make that page exceptionally useful. If PebbleGo wants to improve what they offer, every page must be written by someone like her. The "American Indians Today" page that she wrote is divided into several sections. Over and over, she uses present tense verbs. the illustrations on the page are eight full color photographs of Native people in the present day, like this one in the Government section that shows the Navajo Nation's Council Chamber: 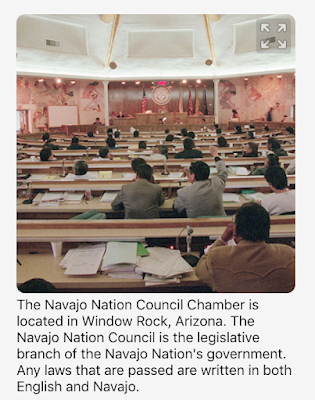 The page created by Dr. Phillips demonstrates that you--PebbleGo--can do better, but you must step up and DO better, on ALL your pages. Until you do, I cannot recommend your site.
--Debbie Reese, January 11, 2022
Source: americanindiansinchildrensliterature

A Second Look at PebbleGo Next