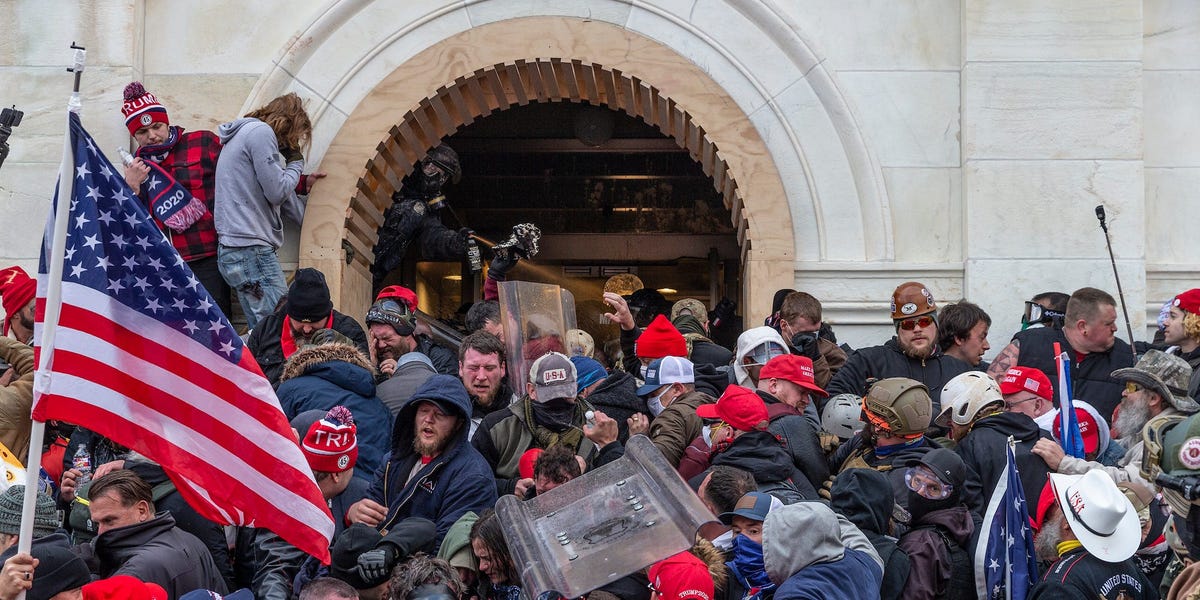 A Capitol riot suspect accused of assaulting police officers during the January 6 insurrection was arrested last week, identified, in part, by a University of Michigan sweatshirt and an explicit phrase tattooed on his middle finger.

In a federal indictment, prosecutors said Justin Jersey, 31, of Flint, Michigan, used a baton to assault officers outside the Capitol.

Jersey faces six charges stemming from his alleged participation in the Capitol siege, including assaulting, resisting, or impeding officers and inflicting bodily injury, civil disorder, and entering and remaining in a restricted building with a deadly or dangerous weapon.

Internet sleuths spent months searching for Jersey, who appeared in several photos and videos from the Capitol attack. The online community known as "Sedition Hunters" nicknamed the mystery man #Fingerman — a moniker inspired by a heavily-circulated photo of him giving the middle finger to US Capitol Police officers during the attack.

To match his graphic hand gesture, Jersey has the phrase "fuck you" tattooed down his middle finger, which helped investigators eventually confirm his identity, according to HuffPost. The online detectives found an Instagram picture of Jersey that revealed the tattoo on his left finger and matched it with images of the man swinging a stick at authorities during the siege, the outlet reported.

While searching for the man in the photos, online investigators also noted the suspect's University of Michigan sweatshirt, which helped pinpoint his general location, according to the publication.

One of the internet sleuths who played a role in finding the suspect told HuffPost reporter Ryan J. Reilly that Jersey's suspected identity was sent to the FBI in August, nearly one month after the bureau released a video asking for the public's help in identifying the man seen attacking officers.

The "Sedition Hunters" community noted that, despite Jersey maintaining a low profile on social media, his girlfriend posted multiple photos and updates about the couple's participation in the siege at the time on her Facebook account, even tagging Jersey in one online post.

The couple attended the riot with their friend, Trevor Brown, who was arrested in July, HuffPost reported.

Jersey, who was arrested in Flint on Thursday, was charged in a superseding indictment that names eight other Capitol riot defendants who have already been charged in the attack, including Jeffrey Sabol; Peter Francis Stager; Michael John Lopatic Sr.; Clayton Ray Mullins; Jack Wade Whitton; Logan James Barnhart; Ronald Colton McAbee; and one other defendant whose name is redacted.

According to The Detroit News, which was first to report Jersey's arrest, the defendant made a brief appearance in court on Thursday and is being held without bond until he can be transferred to federal court in Washington, DC.

Jersey had no current attorney listed as of Monday evening.

More than 700 people have been charged in connection to the deadly attack and more than 100 have pleaded guilty.