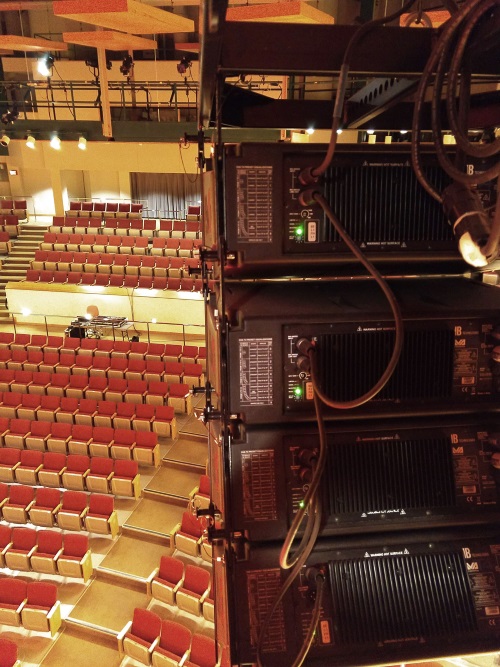 A Tale Of Two Gigs: Embracing The Variety Inherent In The Audio Profession

One of the things I love about working in professional audio is that there’s no such thing as “typical.” I’m always dealing with different artists, different styles of music, and different technical situations, all of which help keep me engaged as I look forward to new challenges. This past weekend serves as an excellent example.

It started on Friday afternoon at the theater on the campus of an area college. A bluegrass show was coming in that night, but the venue’s technical director had informed me of problems with the sound system. I showed up, measurement rig in hand, to see what I could do about it.

The house left array had inconsistent high-frequency coverage and the subwoofer wasn’t doing much of anything at all. Per-box HF EQ was out of the question because the entire array was driven from a single processing channel, until I realized that the boxes in question have a rear-panel HF shelf option. A quick trip up behind the array in the lift brought the HF coverage back into line and significantly reduced front-back tonal variance for the folks in the house (Figure 1).

The sub was an even simpler fix – the problem wasn’t the sub at all, but the XLR cable driving it. Swapping it out brought the system back to firing on all cylinders.

Midway through running my audio drive lines for the event, a loud “Bang!” resounded from backstage, all of the stage lights flashed, and then the venue was plunged into darkness. I don’t mean “dimness,” I mean can’t-see-your-hand-in-front-of-your-face darkness. In a theater, this is notable because emergency lighting is supposed to automatically activate in the event of a power failure.

Similarly, the “bang” turned out to be the theater’s fire curtain releasing its counterweight, which was equally curious because no fire alarm was triggered. (In our jurisdiction, fire curtains must hold for two hours before lowering due to a power failure.) Thus, the facilities manager was called in to investigate why the venue’s electrical backup and safety systems weren’t functioning. At least the fire curtain looked cool in the stage lighting (Figure 2).

While the facilities people worked with the venue’s tech director, I set the stage for the bluegrass event – three musicians on stage, carrying their own microphones, with a single monitor wedge per musician. Simple and elegant.

Typically, I’d only lightly reinforce this genre of music, especially given the acoustically live space, but I chatted with the musicians a bit beforehand and they wanted a bit more reinforcement.

We achieved a nice, full sound that was enjoyable but not too loud. The band played well and sounded great, and load-out was a piece of cake. Then the TD and I headed to catering, where a more literal piece of cake awaited (Figure 3).

Saturday was another situation entirely – a band consisting of some of my very good friends had agreed to play at a local bar for a benefit event. Usually when someone says “bar gig” I’m a bit hesitant, but what are friends for? They’re great musicians, which makes my job easier, plus I’d been rehearsing with them, and over the last few rehearsals, we’d built a real monster of a show file that I’ll detail in a future article.

It had been quite a while since I mixed in such a small room, and I quickly learned how many things I’d been taking for granted working in larger venues: sufficient circuits of clean power, stages large enough that the bassist doesn’t have to sit on the drummer’s floor tom, a clearly demarcated front of house area, work lights, and the ability to load in and out without navigating through a crowd of screaming drunk people, to name a few.

In rooms of this scale, every single dB of gain before feedback is a prize worth fighting for, and the entire sound of the show becomes dictated by what’s blasting off the stage. This is where all of the tricks of the trade come in handy: I managed to lay out a relatively clean stage despite the cramped quarters, with the guitar amps miked and spun around to reduce stage wash as much as practical (Figure 4).

In addition, the entire band is on in-ear monitors, so the absence of wedges not only helps immensely on such a small stage, but also gives a fighting chance at getting clean vocals on top of the mix out front.

The good news is that the only thing coming off the stage at an appreciable level was the drums. The bad news is, drums are loud. It took a bit of agility, but I did manage to turn out a listenable mix. This is the great paradox of being a professional: I was not happy with the mix. Whereas Friday night was an artistic mixing experience, this was full combat.

Audio pros are trained to analyze and critique our mixes because that’s how we make them better. Standing at FOH, I heard all of the problems, all of the compromises, all of the inadequacies, and how loud it was.

On the other hand, several regulars and friends of the band told me that this was the best sound they’d heard at that venue to date, and that the show was at a much more comfortable volume than they were used to. “What they were used to” is the theme of the gig, I suppose; even though I felt I was mixing one of the worst-sounding shows in recent memory, most bands playing in that venue probably aren’t doing things like isolating their amps, eliminating stage wedges, and bringing their own engineer who is familiar with the show.

So much of what we do is patterned to the point that we don’t think about it, yet it’s at the very core of what makes us professionals. For example, I would never even think about showing up to an event without having done at least some form of an advancing process – it’s just what we do. But when asking typical advance questions of the bar staff, it was clear to me that they largely didn’t grasp what was happening.

I think these moments are great reality checks, a sort of objective look at what a unique beast the whole “event production” thing really is, and how deeply it permeates our daily interactions, expectations, and experiences.

The audiences at both shows were relaxing and enjoying some music after a day’s work. For me, that was the day’s work. But that’s the cool part, isn’t it?

The post A Tale Of Two Gigs: Embracing The Variety Inherent In The Audio Profession appeared first on ProSoundWeb.

A Tale Of Two Gigs: Embracing The Variety Inherent In The Audio Profession