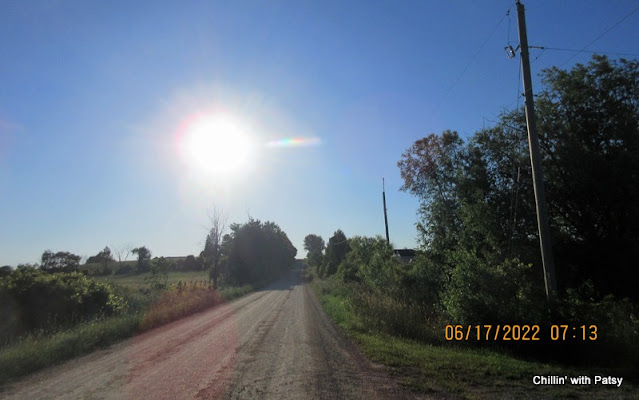 On Friday, June 17th Bill was up at 5:30 (or sooner) as he had to be in Mildmay for 7 am. I’d been dreaming but had a good sleep – as far as I remember! 😊 I read a comment on Facebook yesterday from a niece that I’ve only met once (she’s my oldest sister’s husband’s daughter). Anyway, she was in my dream along with my other sisters. Why Tammy was at Ladyfest is a mystery but it proves how strange our dreams can be and where the content comes from.

I took my time getting up, although I briefly popped out of bed at 6:15 to kiss Bill goodbye, and then Gibbs and I went for a short walk out the lane and back. More evidence of turtles laying eggs only to be followed by Mr. Pepe Le Pew eating them. ☹ It is so sad sometimes, this nature thing, when one species is preventing another from surviving. I found 3 freshly disturbed nests and tossed the shells before Gibbs found them.

Bill and I talked about it later that it is only a blessing that Mama Yertle has no idea since she lays the eggs and moves on. At least we don’t think she is aware that this is happening after she leaves. So sad to us turtle lovers. After our walk, I drove into Durham to clean. I gathered up the clothes that were still in the washers and put them in the Lost & Found. I’m going to have to wash them down the road and take them to a donation centre again.

I took an extra half hour today to scrape the parking lot clean of debris. Stones, gravel, sand, leaves and the cigarette butts that never seem to find a can. They latter went into the garbage but the debris was just pushed to the back of the lot into the bushes. It looks better even though I had to use a snow shovel to do it! 😊 It worked quite well! I left there and stopped at Foodland for some milk and butter before heading home.

Well, there have been Garage Sale signs for the past week and my nose (and Black Beauty) had to follow the signs back into a well-hidden property. What a lovely spot! I found 3 books (James Patterson), a gift for Donna and some purple stones for – something I’ll figure out down the road. They were pretty. We had a nice chat, the 2 owners and myself and when the conversation rattled around Arizona, this time I remembered to leave them one of our cards. 😊

Back home, I sat and finished my blog for yesterday and then placed an online order, had some lunch and we went outside to cut grass. I only cut the main area up here, it is enough considering it also involves moving the hammock, chairs and picnic table. Gibbs and I sat for a long time, just on the steps and then in a chair. The wind increased by the hour and yet it was deliciously warm! No complaints, the humidity seems to have dissipated. Cooler air is afoot.

We came in when it was tea time, around 3:30, and it wasn’t long after that Bill came home. I’ve started a new book but only got a few pages read at this sitting. It is called The Little Giant of Aberdeen County by Tiffany Baker. It sounds good so I’ll keep you informed as I go along. There just doesn’t seem to be the same amount of time to read in my days lately. Between work, the puzzle and Gibbs, my plate is easily filled. No complaints except that I’m so far behind on blogs!

For supper, we had (bclt’s) bacon, cheese, lettuce and tomato sandwiches. Toasted, of course. They were very good and when Bill went out to cut some of ‘his’ grass, I cleaned up and had a couple of scoops of ice cream. He’ll have his later, where I like to avoid eating after 7 if I can. 😊 The winds have not abated all day, gotten stronger if anything. We hope they calm before tomorrow, it's hard to fly planes in the winds! The temperature may have reached 21C/70F but have now dropped to 14C/58F at 7 pm.

Gibbs went upstairs to bed while I wrote today’s post. What a goof! Oh well, at least he isn’t laying across my laptop as he often does. Hint, hint for attention. ♥ This was a great day.

My sister-in-law had a personal operation in Cold Lake, Alberta this morning and the best news of the day is that she is doing well. Nothing upsetting to report so I’m feeling not only are we relieved and grateful but my little brother is flying high. ♥♥♥ Thank you, God for playing a part in all that.

Thank you to my readers for sticking around with me for another day too!