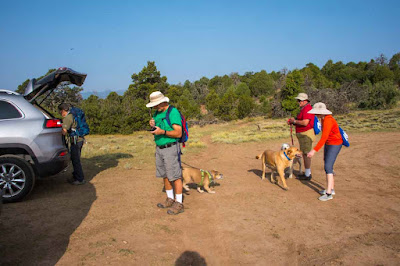 Hiking the Royal Gorge Canyon started out an exciting adventure, slowed to a snail's pace and ended up with a screaming, running melee!  What could be more fun?

There were five of us driving up a bad dirt road to discover the trail head.  It's not well marked .... I looked the entire way for a sign.  Eventually we landed here.  Still no sign, but at least there was a trail.

If you have any kind of cell service, there is an App called All Trails.  It will not only give you directions, but can track you, shows mileage and exactly which way to go.  If you PAY for All Trails (which I do not) you can download the entire trail to your phone to keep you from getting lost.

The scenery was spectacular as we came to the edge of the canyon about a mile down from the bridge. 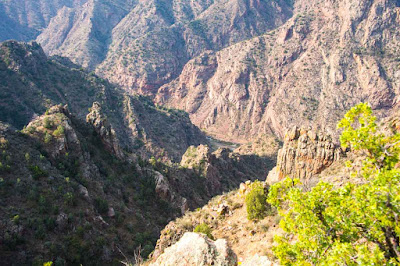 Of the five people, four came with three dogs.  One very well behaved bulldog stayed right on the trail behind her parent and never wandered.  On the other hand, one of the two labradors wandered incessantly, ran ahead, ran back, almost knocking people over and crossing over cactus like it wasn't there.  This is NOT a good thing when hiking in high country. 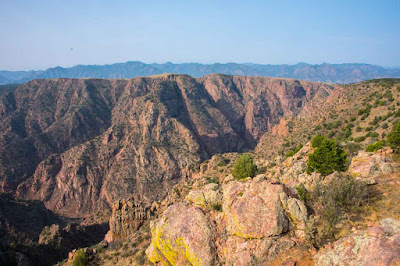 Welcome to LeView which is looking over the cliff from the rocks above.  Just as we were leaving, we were met by three ladies.  Since the dogs were not cooperative at all, and the two labs NOT on leashes most of the time, we left so as not to knock the ladies into the canyon below. 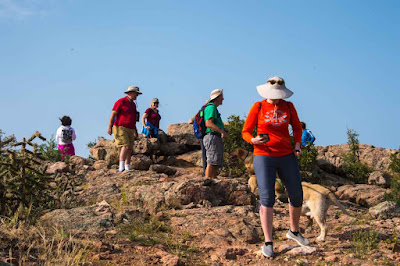 Just as we were heading out, the train whistle blew.  She makes three trips a day along the tracks. 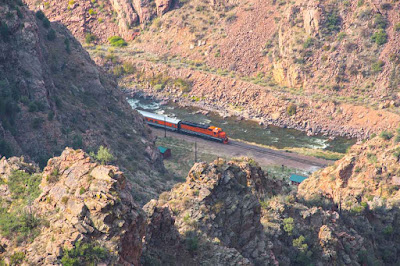 This is the unruly guy, Rocky.  I mentioned several times that he needed to be on a leash, to deaf ears.  It almost cost him his life. 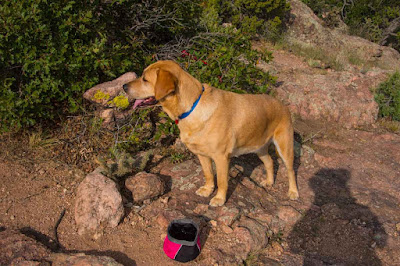 Here's our rally hosts, Patti and John Painter.  Cocoa sitting below is our hiking guide.  She's a master class act!! 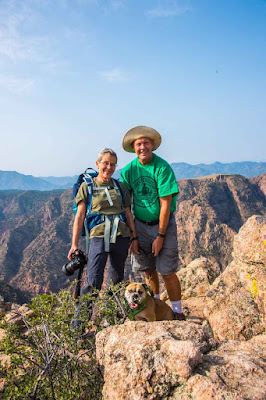 So ... we're just hiking along, with me looking down and side to side the entire time.   After running into ratttlesnakes at my house, I'm VERY aware of my surroundings.  I heard just the slightest rattle and caught sight of this guy not twelve inches off the trail.  SNAKE ... RATTLESNAKE!!!
Just then the dog Rocky ran by me ahead, as did his mom while dragging the other dog Charlie.  Just then Rocky caught the smell and ran back.  I whacked him in the head with my camera to keep him from being bit.  Two more steps and he would have been toast.
Now Rocky's dad, who is left back on the trail, grabs a big rock.  "You don't need that, just walk by at the far side of the trail and he won't bother you".  It took a couple of encouragements, but eventually we were all past the snake and all in one piece.
Wouldn't you know out here in the middle of nowhere, I'd run into another snake.  Isn't he a beauty?  He blended in very well. 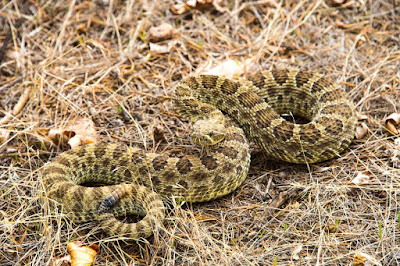 Finally back at the cars after our 2-1/2 mile hike, everyone is okay.  It was a close call I hope not to replicate.  Rocky is seriously lucky to be alive. 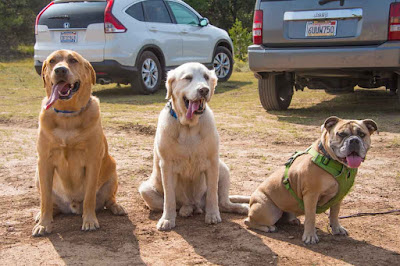 Next up, Colorado State Prison ... won't THAT be fun!!  In the meantime, I'm already in Alamosa.