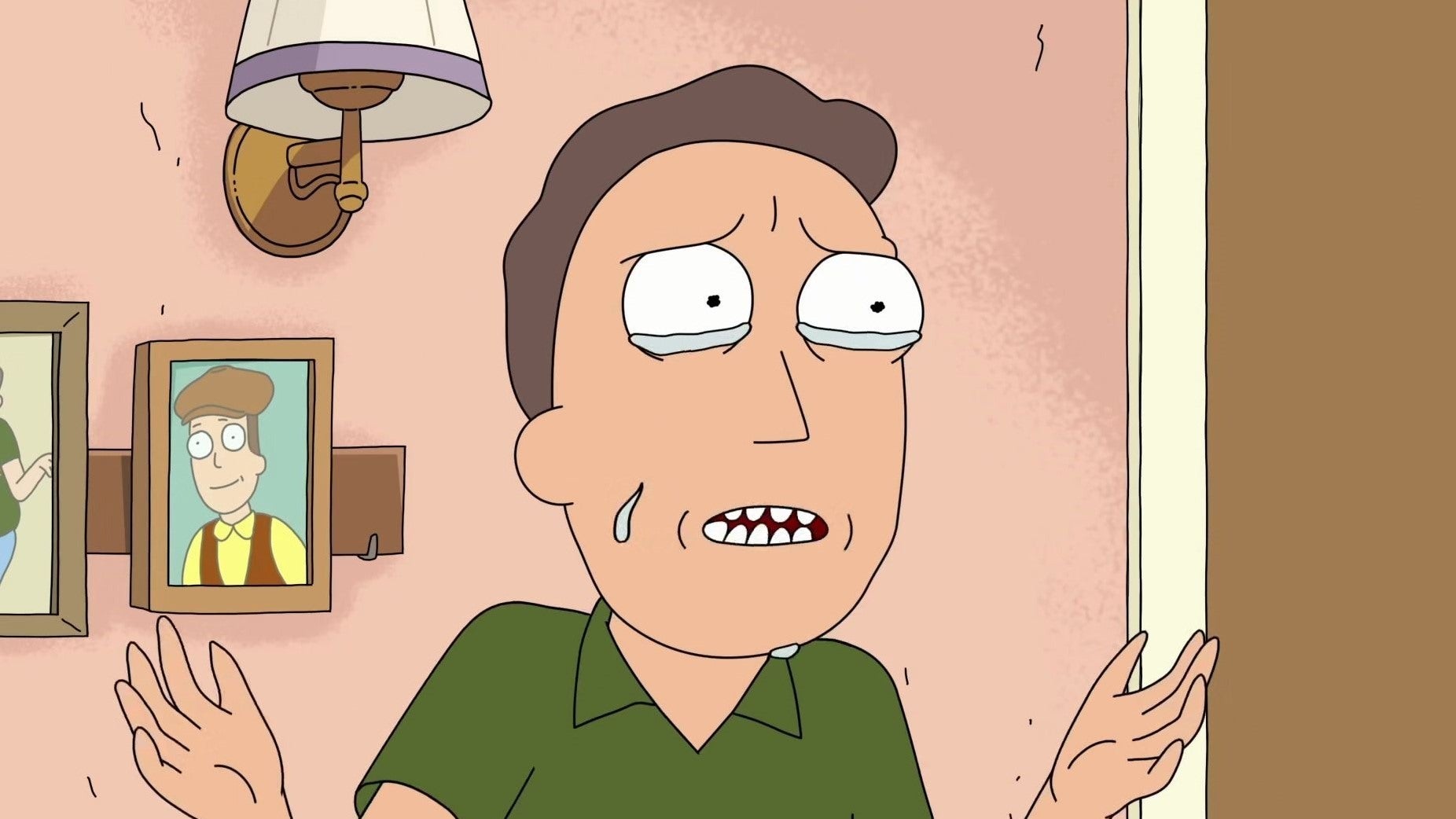 The latest installment of IGN's Watch From Home Theater is a little different from the norm. IGN readers voted on their favorite Jerry-centric episode of Rick and Morty, and the winner was Season 1's "Meeseeks and Destroy." Jerry Smith himself, Chris Parnell, stopped by to watch this classic episode, reflect on the challenges of being Jerry and even give an update on the status of Rick and Morty: Season 5. [ignvideo url="https://www.ign.com/videos/rick-and-morty-season-5-update-and-more-with-chris-parnell"] If you missed the Rick and Morty WFH Theater, you can still rewatch the stream above. But if you just want the juiciest details from the stream, read on to find out everything Parnell had to say about the series and his tragically unloved character. [widget path="global/article/imagegallery" parameters="albumSlug=rick-and-morty-the-10-biggest-wtf-moments&captions=true"]

What's the Status of Rick and Morty Season 5?

An IGN viewer asked Parnell about the current status of Season 5 and whether it might be coming down the pipeline soon. After all, creators Justin Roiland and Dan Harmon promised a faster turnaround for new seasons, and we know the series was renewed for a whopping 70 episodes after Season 3. Parnell dashed any hopes of Season 5 being right around the corner, unfortunately. He revealed that while the next season has been written and at least partly storyboarded, none of the actors have recorded their lines yet. Parnell said, "We have not started recording Season 5, but I know they have, certainly, episodes written and have it boarded to a certain extent. But I don't know when we'll start recording." Most likely, that means no more new episodes in 2020 after the second half of Season 4 wraps in late May. The silver lining, at least, is that Parnell doesn't foresee the ongoing COVID-19 situation interfering with the process of recording lines. "I've upgraded my home setup - even though it doesn't look like it - so I can actually record proper sessions from home," he said. "You know, as long as the studio does some safety protocols and stuff like that, it's an easy situation to go into a booth and record and not have to encounter anybody."

Getting Into the Jerry Mindset

For many fans, it's Jerry, not Rick or Morty, who ranks as their favorite character on the series. He's an entertaining guy, but he's also a perpetual sad-sack loser who rarely gets any respect. We were curious if Parnell ever finds it difficult to get into the mindset of Jerry Smith and playing a character who seems to be the universe's favorite punching bag. According to Parnell, it's surprisingly easy to be Jerry. "Well, it's fun to play a character that's put upon like Jerry is by, really, everyone else in the show," he said. "Especially Rick, obviously. It's fun to play someone who's essentially a loser. For better or for worse, it's not hard for me to tap into that part of myself. It's not a big leap for me to play Jerry. Take that as you will." Parnell returned to the topic of identifying with Jerry a bit later in the stream, saying, "The low self-esteem is something I struggle with. I've pretty much dealt with it through therapy, and you have to have a certain amount of confidence to do something like SNL. But I can relate to the loser in Jerry for sure. I think that helps inform a fair bit of my comedy, because I'm often playing characters you wouldn't typically describe as winners." It seems Parnell had an especially easy time getting into character for "Meeseeks and Destroy," as he revealed he's a terrible golfer who has exactly one game of mini-golf under his belt. [ignvideo url="https://www.ign.com/videos/2020/04/30/rick-and-morty-season-4-episode-6-never-ricking-morty-review"]

One of the more surprising reveals during the stream came when Parnell told us the cast has never done a group recording session. Instead, the various actors record their lines individually. "We've never done a group record," he explained. "Which... is fine. I think everybody kind of likes recording solo. Spencer [Grammer] is in New York now, most of the time, and Sarah [Chalke] is in Canada most of the time. It kind of makes sense that we would do it separately." Parnell also told us he doesn't tend to improvise lines during his recordings, leaving the improv mostly up to Roiland. "It's really just Justin that does the improv. I don't do a lot of improv, because the scripts are really well-written and well-thought-out. The idea that I'm going to go in the booth and come up with something in my head that's better than what they've spent weeks or days or months thinking about is a little presumptuous."

When asked about his favorite Rick and Morty episode so far, Parnell went with a fan-favorite choice - Season 2's "Total Rickall." He also named Mr. Poopybutthole as his favorite character. "I think he means well. He's saddled with an unfortunate name, but he doesn't seem to mind it." However, Parnell has a different pick for his favorite Jerry-centric episode, and no, it's not "Meeseeks and Destroy." He favors Season 3's "The Whirly Dirly Conspiracy." When a viewer asked if Parnell has a favorite Beth and Jerry moment, he turned toward Season 2's "Big Trouble in Little Sanchez." Parnell said, "When they go to the marriage counseling planet and they get to see a physical manifestation of how Jerry sees Beth and how she sees Jerry, and Jerry's a little, pathetic, wormy creature. I found that very delightful."

Is Jerry a Villain?

Some fans argue Jerry is actually the villain of Rick and Morty, given his victim complex and how so many characters (including his own family) seem to outright despise him. However, Parnell said he doesn't necessarily agree with that viewpoint. "I think he's generally undeserving of the heat he gets. He does play the victim, I guess, a fair bit. He's sort of gotten used to that mode of operating. But he can also be content doing his own thing and puttering around, which is why I think he'd do okay in a quarantine situation like this. But, you know, I obviously have a lot invested in Jerry, so it's hard for me to feel like a bad guy." Parnell did admit Jerry comes up a bit lacking in the father department, as we asked him whether he felt Jerry had a stronger attachment to Morty or Summer. "That's a good question," he said. "I don't remember him showing a lot of parental affection to either of them. If there's evidence to suggest his love of one over the other, I don't remember it." [widget path="global/article/imagegallery" parameters="albumSlug=the-top-10-rick-and-morty-episodes&captions=true"]

A CineFix viewer posed an interesting question to Parnell. What's one area in which Jerry could actually one-up Rick? The answer? Astronomy. "I think if he could prove Pluto was a planet, he would enjoy that," he said. "I think any time his relationship with Beth is good - on those rare occasions - and solid, he feels good about that in the face of Rick's constant scorn and disbelief that he's married to his daughter." If you want to learn the big reveals from other recent WFH Theater episodes, find out about a major T-Rex blooper in Jurassic Park, learn why Data and the Borg Queen definitely had sex in Star Trek: First Contact and learn more about the hidden video game influences in 10 Cloverfield Lane. [poilib element="accentDivider"] Jesse is a mild-mannered staff writer for IGN. Allow him to lend a machete to your intellectual thicket by following @jschedeen on Twitter.
Source: ign.com