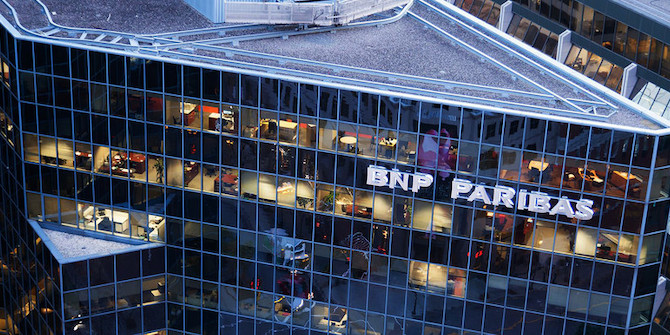 Money makes the world go ‘round, as the saying goes. It greases the wheels of global business as well as eases the pain in the gap between the haves and the have nots through benevolent philanthropy. Banks are both the middlemen that channel these billions of dollars as well as investors in their own right. Too often, they also are the financiers of human rights violations.

For example, in November, Westpac Banking Corp. was sued by Australia’s financial crimes agency for failing to report more than A$11 billion ($7.5 billion) in international transfers to 12 entities believed to be engaged in child exploitation. The accounts of the enterprises showed repeated low-value transactions to countries in Southeast Asia, including the Philippines – a well-known and suspicious pattern.

Likewise, in Sudan, rights groups are battling international banks they accuse of facilitating corruption and crimes against humanity by laundering money for former ruler Omar al-Bashir. One of their targets is French bank BNP Paribas, which was tried in a US court in 2016 for its role as the main financier for Bashir’s government from 1997 to 2007, a time when Sudan was under sanctions.

Now, a survey of practices adopted by banks in the Middle East, conducted by ImpACT International for Human Rights Policies, documents that these egregious examples are symptoms of a larger malaise: a widespread absence of purposeful attention to the UN Guiding Principles on Business and Human Rights (UNGPs). First adopted in 2011, the UNGPs state that human rights protections must be ‘implemented in a non-discriminatory manner, with particular attention to the rights and needs of, as well as the challenges faced by, individuals from groups or populations that may be at heightened risk of becoming vulnerable or marginalized, and with due regard to the different risks that may be faced by women and men.’

In an advisory issued six years later, the UN Commission on Human rights made it clear that banks are responsible for the impact of both their direct actions and those of any clients to which they lend.

In its examination of compliance with the principles, ImpACT focused on the Middle East, which, according to PwC, is ‘one of the world’s fastest growing markets in the banking and capital markets sector.’ Surveys were sent to banks in 14 countries across the Middle East and North Africa: Tunisia, Morocco, Palestine, Qatar, UAE, Jordan, Bahrain, Lebanon, Oman, Algeria, Iraq, Saudi Arabia, Libya and Egypt. Response rates ranged from 20 percent (Algeria) to 62 percent (Palestine). Among the 42 banks that responded, we evaluated adherence with the four main categories of the UNGPs: policies, commitment to due diligence, reporting of compliance and citizens’ access to remedies when violations occur.

An obvious drawback to this methodology is its reliance on self-reporting. However, the fact that the bank employees completing the questionnaire were allowed to be anonymous encouraged honesty.

In the analysis, each of the UNGP categories was assigned one point, with a possible total of 12 overall. Adopting the same approach used in 2014 by BankTrack, we split banks into three groups based on their scores: The lowest-ranking institutions (a score of 2 or less) demonstrate wholly inadequate or even absent consideration for human rights. At the top end (scores of 6-12) are those banks that have shown substantial progress in integrating the UN Guiding Principles into their business practices.

The average score across all countries was a mere 2 (wholly inadequate). The highest average score in any one country fell just short of ‘substantial progress’ (5.6 in Qatar), with the lowest (0.5) in Iraq. At the level of individual banks, only three achieved an average score of 6 – two in Qatar and one in Morocco. Most troubling, 28 of the 42 banks received scores in the ‘totally inadequate’ range (0, 1 or 2). And 14 of the financial institutions received scores of 0 (two in Egypt, three in Iraq, one in Jordan, two in Lebanon, two in Libya, three in Palestine and one in Tunisia).

Areas in which every bank scored 0 are:

A majority of banks (34 out of the 42) received no points at all for reporting on their human rights impact. This means they made no substantive effort at all to reflect on the consequences of their actions, settling for merely mentioning the policies they have in place. None of the responding banks have grievance mechanisms that meet minimum standards, making it difficult for individuals or communities to raise their concerns and expect a response. Likewise, none of the banks have articulated a process to remedy even those human rights abuses identified by their own due diligence.

Banks in the Middle East are failing to uphold their responsibilities to monitor, report and redress the human rights impact of both their direct operations and the actions of their clients. More banks should follow the lead of Dutch bank ABN AMRO, which issued its second human rights report this year.

However, even ABN Amro has issued only two such reports since 2016. These types of public records should be issued annually and subjected to community review and comment. These improvements won’t happen until governments, regulators and customers begin demanding it.

Ramy Abdu is an academic, financial expert and human rights advocate. He is the Founder and Chairman of the Euro-Mediterranean Human Rights Monitor. He tweets at @RamAbdu