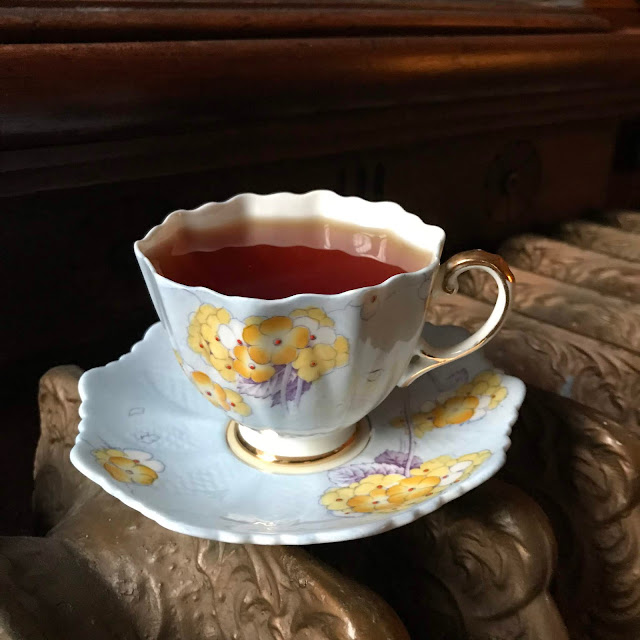 The History Of English Breakfast Tea

Tea didn't become a breakfast beverage until sometime in the mid eighteenth century. Up until this point tea was a pricey beverage, reserved for afternoon tea affairs. But when prices lowered it became more of an 'all day' drink. Also, it's recorded that around this time Queen Anne started taking tea instead of ale as her morning drink, which started the fashion of tea at breakfast.

If you think about it, if English Breakfast tea was named in England they probably would have called it 'Breakfast tea', not 'English', right? So maybe it makes sense that the name for this blend was actually coined elsewhere, perhaps in the United States. But was the actual black tea blend itself created here, or elsewhere? Well, various sources seem to have differing opinions.

They are a distinct variety, differing in color, liquor, and flavor from the Oolong species, and known to trade in this country as “English Breakfast” tea, from its forming the staple shipment to England. They are produced in the province of Woo-e-shan, and derive their name from the Bow-ui (bohea) Mountains, where they are grown...bohea teas comprise Capers, Pekoes, Souchongs, Pouchong and Congous.

This quote indicates Chinese black and oolong teas were often enjoyed for breakfast at this time, but it doesn't really help us figure out if Davies coined the phrase. It's important to note green tea was also widely consumed during this time, but it seems that 'breakfast' teas were mostly black or oolong. A typical English breakfast during this time period was savory and meaty, so black teas would have worked well to balance out the richness.

Some sources say 'English Breakfast' was actually a Scottish invention by Scottish tea merchant Robert Drysdale in 1892 (which would also make sense, since it's called English Breakfast and not just Breakfast tea). From Breakfast: A History by Heather Arndt Anderson

Most credit the invention of so-called English Breakfast Tea goes to one Scottish tea master called Drysdale, who purportedly developed the blend of  Ceylon, Keemun, and Assam leaves to market as "Breakfast Tea" in the late 1800s.

Sources say Queen Victoria sampled this blend during her stay at Balmoral (the Scottish royal residence), and she returned to England with a large supply. Thus it was renamed as 'English Breakfast Tea'.


English, Irish, and Scottish Breakfast
If you look around for breakfast teas you'll see English, Irish, and Scottish breakfast blends. They all vary in flavor and strength (with Scottish supposedly being strongest). Even though English Breakfast started out as a Chinese tea blend, all three blends may contain teas from China, India, Sri Lanka and Africa (and sometimes other areas). Since there isn't a standard formula out there, it's tough to know what you're going to get.

No matter where the name comes from breakfast teas are created to stand up to milk and sugar, so they're often heavy on strength and lacking in nuanced flavor. But that's not always the case. I've found a few breakfast blends that I really enjoy and often brew them up in the morning.

I look for blends that are full loose leaf tea, with a nice balance of flavors. When you get a good one, milk and sugar isn't necessary. Since you never know how a breakfast blend is going to taste, it's best to try as many as possible!

The History Of English Breakfast Tea