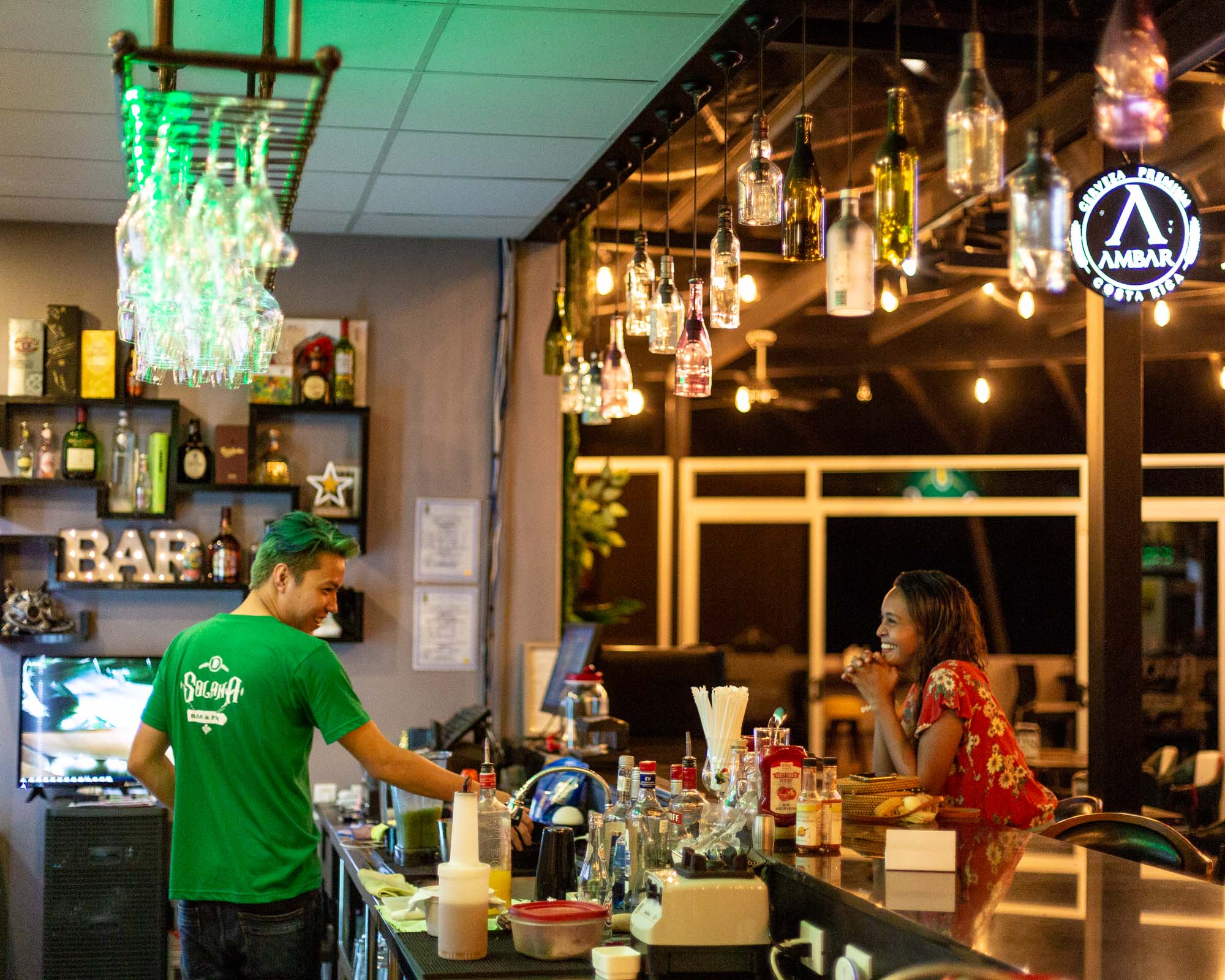 Cumbia, reggaeton and bachata are the undisputed soundtrack of Nicoyan nightlife. If you are like me and prefer to stay away from those musical genres, this can be a compelling reason to stay home on a holiday Friday.

That changed a few months ago when Solana Pub opened on the outskirts of the colonial city.

It is located on the second floor of Plaza Ruta 21 (on the main road between Nicoya and Santa Cruz) and is a mix of English pub, sports bar and restaurant. Large images of rock icons like Freddy Mercury, Elvis and the Beatles hang in every corner of the place and, right in the center, there are screens pointing in all directions that project American football or the worthy sport of the day.

Since I have visited the pub before, I arrived with my friend Andrea as backup for two reasons: because they serve a lot of food and because I am a vegetarian. That reduces my options to French fries and onion rings.

As we climb Solana’s stairs, Chester Bennington’s voice can be heard resonating from the speakers. This may not sound tempting to some but it is comforting to hear Linkin Park instead of the “magdalena-magda-magdaleeeena” that plays day after day in Nicoya.

In Nicoya, nothing happens. The town is dead. There is never a party. Please! You don’t know what you are talking about. So you don’t make that mistake again for…
READ ALSO

Win Jung Fong Lu, the administrator, welcomes us at a table in front of the bar. He is a 30-year-old Nicoyan, wearing a green shirt that matches the color of his hair. Win gives us a brief rundown of how the pub came into existence before attacking Andrea’s and my palate with his best weapons.

“My dad has a restaurant downtown here and I grew up in that kitchen,” Win reminisced. At 16, he went to San Jose to study and work. After exploring several different career options, he decided to study cooking, but he diverged from Chinese food restaurants like his dad’s. He returned to Nicoya after 14 years, to start this project, a proposition that does not exist far from the coastlines.

Solana has a terrace for just over 100 people with a 180-degree panoramic view of the hills that surround Nicoya, an idea that took Win three months to make a reality. The body appreciates this foresight during these summer days, since the atmosphere is very spacious and cool.

Before the dishes arrive, a mechanical noise comes from above and the roof opens to reveal the canopy of a huge Guanacaste tree that rises next to the pub.

I was thinking that I had never been to a convertible bar when a quantity of food arrives that Andrea will not be able to tackle. The table is filled in front of her from one side to the other as if she were royalty and I the scribe who waits attentively to record her verdict after each bite.

My friend starts her feast with a recipe that Win invented years ago and put on Solana’s menu: Asian ceviche. A combination of shrimp, fish, julienned red onion, sesame seeds and soy sauce that, according to Andrea, perfectly balances the acidity of the lemon. As an accompaniment, it has wantan strips that clean the palate after each bite, so “each spoonful of ceviche is as if it were the first one,” Andrea tells me.

For me, there is no main course, but what I can review are two of the 19 cocktails on the menu, a fair deal. First I tried the mojito, a very refreshing drink that is generous in all its ingredients: rum, plenty of mint, lime, sugar and soda. If it wasn’t for the lime seeds that got stuck in the other end of the straw, I would have finished it in seconds.

Now “Andre” attacks the Hamburgona, one of the seven types of hamburgers on the menu. She cuts it in half to be able to handle it because it is very big. It has about a 3/4 pound beef patty, lettuce, bacon, cheddar cheese, a fried egg, and is topped by two onion rings. “The egg is a hit. I had not tried it before on a hamburger and it gives a rich flavor but it’s lost a little amongst so many ingredients,” my friend tells me.

I inaugurate a blue margarita, my second cocktail of the afternoon, while Andrea now faces a rack of six barbecue ribs. A little spicy due to the pepper, she suspects, but “it has a delicious smoked flavor and the perfectly cooked meat falls from the bone without effort,” she assures me.

The salt around the glass rim of the blue margarita balances the sweetness of the drink well. It is light on liquor but with each sip I feel the need to look for a pool and finish it floating belly up until the afternoon fades away. Andrea takes a sip and has the same idea but sums it up more briefly: it tastes like self-love.

From our table, we can see the sunset lighting the clouds up in fluorescent reds and oranges, and the speakers play my own soundtrack, “I’m on a Highway to Hell,” by AC/DC.