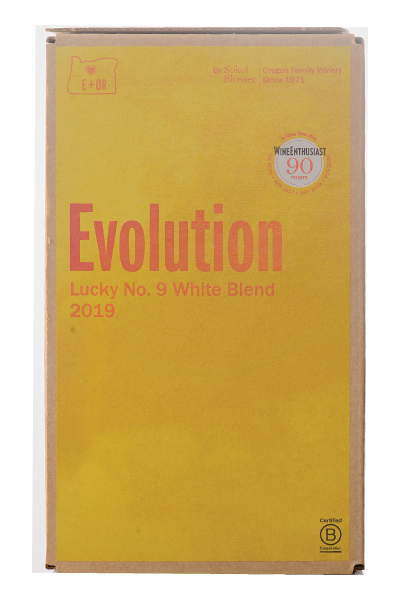 Wine of the week: Sokol Blosser Evolution Lucky No. 9 2019

How about a white wine from an Oregon producer in a 1.5 liter box that works out to $9 a bottle?

We’ve heard lots about the west coast grape glut, but we haven’t seen it translate into much in the way of lower wine prices. Sokol Blosser’s Evolution white blend, the Lucky No. 9, might be the first of many.

That’s because it’s unusual to see a wine like the Evolution, a white blend that usually carries an Oregon appellation, in a box at this price. The 1.5-liter box works out to $9 a bottle; typically, the wine costs around $15. So what’s the catch here? It may well be all those grapes. The box has an American appellation, which means 75 percent of the grapes didn’t come from any one one state. My guess, from tasting it, is that it’s Oregon fruit with more than a fair share from California’s Central Valley, the center of the grape glut.

Which is is not say the Evolution white blend ($18/1.5 liter box, sample, 12%) isn’t worth drinking. Because it is – the kind of wine to chill, keep in the fridge, and drink when you feel like a glass. Look for the slightest hint of sweetness, and not nearly as much as I thought there would be. Plus, it’s hidden among a variety of white fruit flavors – some tropical, maybe some peach, and a pleasing sort of apricot stone bitterness.

This is a fine value, and I’m not the only one who think so. Give Sokol Blosser credit – it saw all those grapes sitting there waiting for someone to be creative and figured out how to make a quality cheap wine and still turn a profit. What a unique concept for the post-modern wine business.

Wine of the week: Sokol Blosser Evolution Lucky No. 9 2019