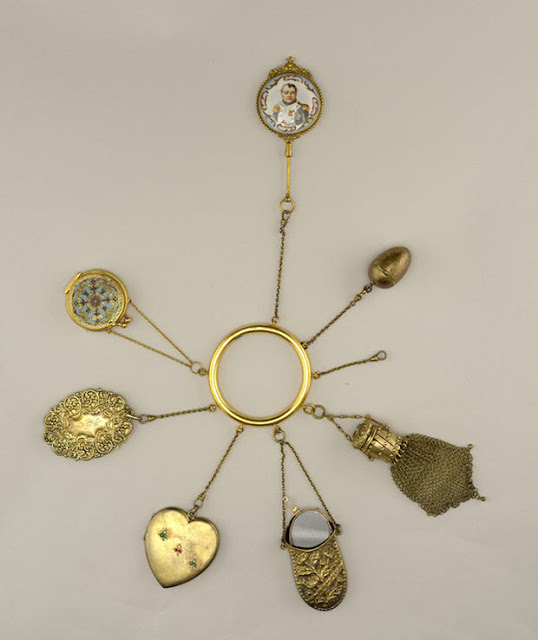 One of the tools Sophronia and her friends often wear in my Finishing School series is the chatelaine, Fashionable Reader.

I used it as a kind of Swiss Army knife for my delightfully deadly young ladies. (Much as I do with the parasol in the Parasol Protectorate and Custard Protocol series.)

From Wikipedia: A Victorian Lady’s finishing touch ~ the chatelaine.

A chatelaine is a decorative belt hook or clasp worn at the waist with a series of chains suspended from it.

Each chain is mounted with a useful household appendage such as scissors, thimble, watch, key, vinaigrette, household seal, etc.

Chatelaines were worn by many housekeepers in the 19th century and in the 16th century Dutch Republic, where they were typically used as watch chains for the wealthy. Similar jewellery was also worn by Anglo Saxon women, as seen from the burial record, but its function is uncertain.

The name chatelaine derives from the French term châtelaine.

I love looking at these and thinking about what a female spy would carry instead. Poisons or defensive fluids instead of perfume (or as well as) for example…