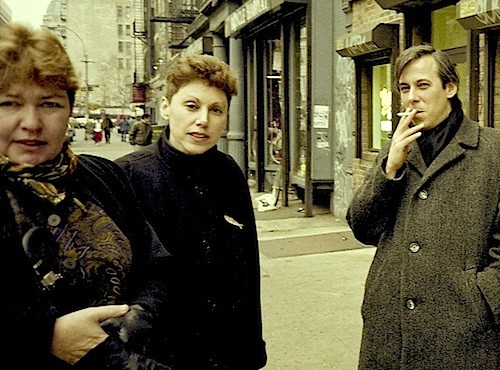 "The Magnificent Seven" [by Elaine Equi]

The Seven Sages – a time-traveling band of philosophers
appearing in ancient China, India, and Greece.

The Seven Senses from which the Self must be emancipated.

The Seven Dwarves -- domesticated and Disney-fied into cuteness.
Bashful and Dopey being perennial favorites.

The Seventh Seal opens on the dark night of a knight as he wanders
Bergman’s black and white medievalism.

The Seven Deadly Sins --- without envy, greed, and pride
there would be no capitalism.

the Seven Brothers, best known for brawling, barn-raising,
and cocky dance moves, before a group wedding can take place.

Ed. note: The poem is from The Intangibles by Elaine Equi (Coffee House Press, 2019). The photo below was taken by John Tranter in New York City in 1992. Elaine is at  the center, with Lyn Tranter to her right and David Trinidad puffing on a smoke.

"The Magnificent Seven" [by Elaine Equi]