Short Sharp Shocks 1 & 2. BFI Flipside. BluRay 2020/21.
Short films are now a rarity on our cinema screens. This was not the case once. From the early 1950’s the BFI funded shorts and Rank produced their Look at Life series. If you blinked you’d miss something weirdly experimental or suffer a boring documentary on the steel industry. These films were squeezed in before the local ads and the main feature until 1985 when the Eady Fund ceased its finance for the short film
🔻
I love the series title - Short Sharp Shocks. It evokes benefit withdrawal for the work shy or army training tactics. However these two Blu Ray sets provide more pleasure than punishment in the form of the short horror tale and mystery thriller.
So what has BFI Flipside resurrected and digitised? It’s a variable selection. There are a few duds but for the most part I was amused, excited and sometimes disturbed. Some have dated. Some look modern. And one felt positively transgressive. Twenty two oddities providing very different ‘shocks’ for which I’ll provide an overview and try to avoid plot spoilers. 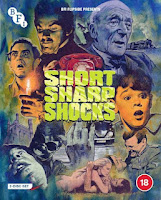 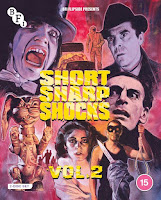