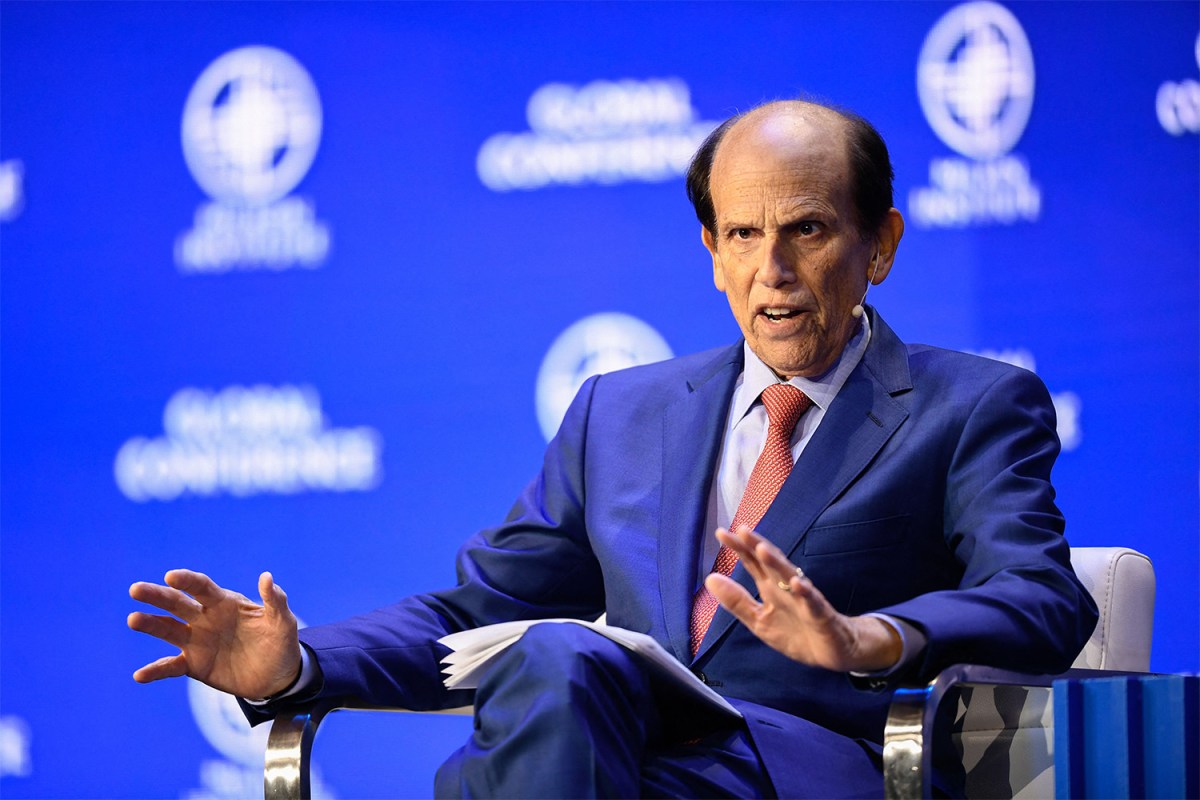 When the history of our times is written, one of the most protean figures outside of government will be Mike Milken.  In the 1980s, he revolutionized finance as the father of the “junk bond,” launching  good industries and bad corporate raiders alike, and as the highest paid financier in the world.  He was sent to jail — perhaps unfairly.  And then reformed himself to be a philanthropic leader in the war on cancer, the fight against the recent pandemic, the founder of the soon-to-open Museum of the American Dream and much more.

Today, I am one of a sea of thousands of people milling in and around the Beverly Hills Hilton for the 25th Annual Milken Institute: Power of Ideas Global Conference. K95 COVID-19 masks were suggested before arriving, but surprisingly few masks of any sort can be seen. Rather, armies of suit-coated or sports-jacketed men — mostly young — and a cross section of women, most seemingly straight off an Ivy league varsity lacrosse field; the “elite” of the new worlds of finance, medicine, energy, non-profits, geopolitics, venture capital, tech, private equity… As one guest said to me, “Davos is for people who talk, Milken is for people who do.”

The conference ran from Sunday, May 1 to Wednesday, May 4, with 10 parallel sessions of ninety minutes in length, offered simultaneously: “Private Capital as a Tailwind for Social Impact” in the International Ballroom, say, alongside “Investing in K-12 Solutions that Work” in the Whittier, “The Sports Industry” in the Sunset Pavilion, “The Next $10 Trillion” in the Oasis Pavilion and much more.

Alongside the listed sessions, there are all sorts of private sessions — invitation only dinners at the houses of local billionaires, like Steve Cohen or Tony Pritzker (reportedly, Cohen left his own dinner to watch the Mets game, while guests gawked at his art); elite roundtables, also by invitation; corporate cocktail parties and dinners sponsored by investment banks or PR firms or others; and — for those who think ahead — endless one-on-one meetings scheduled weeks in advance for days of straight networking. The spirit of Milken is that all ideas should be made practical, with questions such as how will the solutions be financed, what regulation must be changed, what group of allies brought together.

The event spills out from the already giant, institutional-feeling Hilton into surrounding hotels — breakfast with a Wall Street Journal reporter near the pool on the roof of the Peninsula, or coffee with a Financial Times journalist at the garden breakfast court of the Waldorf Astoria. The Milken folks — a seemingly endless staff — even arrange for special fitness and  yoga events in the early morning, and musical interludes on the Monday night. (And, oh, to be an Uber driver, with “Milken” in the air!) Milken himself is on site, heading on aging legs from meeting to meeting, still conducting the orchestra of global interaction and optimistic problem solving that he himself had willed into existence.  Some of the current financial “masters of the universe” still remember starting their career as junior members at his X-shaped Drexel trading desk, and can’t help but snap to attention when he calls.

This was my fourth or fifth time at the Conference, which itself was back physically after a two year COVID-19 hiatus. This year, I left myself mostly free to wander with an open mind and open ears to hear whatever conversations I could.

There is no way to “cover” the event, but some lines of dialog that struck home:

A world health official warns that if the Ukraine ports can’t be opened in the next few weeks, the giant grain supplies will be ruined and the world can experience massive food instability.

Another official reports that the desire to leave Central America to enter the U.S. is up five-fold, as food in those countries becomes more unaffordable.

Another source just back from Ukraine, reports that Ukraine now has (metaphorically) ten Javelin missiles for every Russian tank, and might push Russia back with time. But blames Biden and Blinken for ignoring  advice to arm Ukraine in advance, potentially preventing the invasion; advice which  Blinken considered “provocative”.

At an invitation-only roundtable that included current or former heads of the NIH and WHO, public and private industry met to find a path to prevent the next pandemic. Among the goals: an early warning system to detect outbreak; genomic lab capabilities for Africa; early work on twenty or so of the most likely pathogen families to lay the groundwork now for quicker future vaccines. Reportedly, Congress has gone tepid, and allocations have not been made.

At a meeting regarding “new ideas to heal the planet,” start-up founders spun visions of advanced fission, clean concrete, and long lasting lithium-free batteries to make alternative energy sources reliable. UCLA professor Gauruv Sant described an upcoming demonstration  project to transform the ocean itself into a carbon collector, by running electric current through seawater to remove carbon first, while simultaneously producing hydrogen as a byproduct to fund it all.

In a session on “ideas that will blow your mind,” topics included using immersion in virtual reality as a drug-free way to control pain (a product just approved by the FDA). A regimen of set minutes per day for several weeks may, it is claimed, disrupt and distract the pain pathways in the mind for months of partial relief.

Another speaker described how the speed of DNA sequencing is accelerating thousands of times; and how China (and American K-12 schools) have attempted a “test and intercept” approach to COVID-19 vs. a vaccine.

A logistics exec explained how he studied the slow down of the southern California port by using free party boat rides and a taco truck to attract workers to talk to him. The dock workers blamed lazy truck drivers, who didn’t arrive with trailers. Next, the truck drivers revealed that — as cargo backed up —  their trailers were buried under excess containers because the zoning code only allowed containers to be stacked two high. Once the exec tweeted out his findings,  zoning was changed in one day to allow stacking four high, helping to return trailers to use and regain speed.

Surprisingly unimpressive were the metaverse sessions.  One began with the panelists’ cartoon like avatars speaking from a virtual Coachella…about as primitive as can be.  Another featured the chance to try virtual bowling. True interoperability between “worlds” (i.e. a Sony game and a Microsoft game) may be decades away. NFTs sound like any other hobbyist collectible, and metaverse cybercurrency sounds like Monopoly money. Haptics appeared more promising, and apparently the Museum of the Future in Dubai has a room that serves all five senses virtually now.

Most interesting on these metaverse panels was Deepak Chopra, who is focused on virtual characters as spiritual companions for those who are lonely or in need of counsel. Chopra explained he has developed his own “virtual Deepak,” trained to respond to questions as he would, and with research capabilities built-in. When he has a question, Deepak speaks to his virtual self, who investigates it for him.

Milken, the person, has always been a strong champion of financial markets and firms as a force for good. One panel described how private equity is increasingly giving ownership wealth to workers at their portfolio companies, and another invitation-only panel outlined some of the best charitable efforts among some of the top PE and other investment firms and their leaders. Institutional money managers sought to predict the markets like priests throwing oracle bones.

Corporate CEOs conversed among themselves in private roundtables. Papers issued by Milken’s Institute between sessions focus on topics like how to finance the battle against microbial resistance to antibiotics (a huge long term threat) and the financing of advanced neurotechnology.

The crowd had begun to thin considerably by Wednesday. The booth in the lobby selling $60 million Challenger corporate jets was running low on brochures; the Faraday electric car demo at the curb fighting to hold its sheen. The roar of voices receded like a wave of the ocean. And like sea flotsam, I floated home.

The post Adrift in the Milkenverse — A Dispatch from the Influential Power of Ideas Global Conference appeared first on InsideHook.