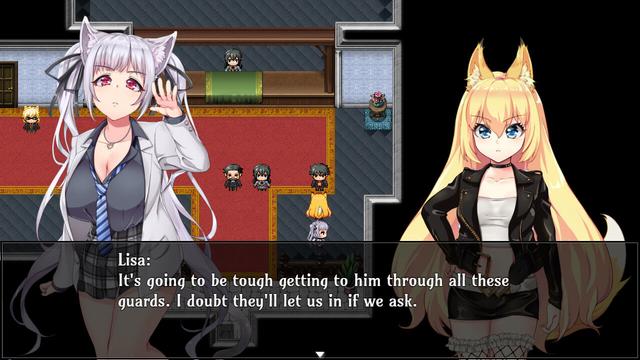 Rise to take down the dictator in AVANTGARDE’s Fox Girls Never Play Dirty, an adventure RPG now available on Steam, Denpasoft, and Kagura Games' own storefront.

Fox Girls Never Play Dirty is an RPG set five years after the second world war. The story follows Ryunosuke, a young practitioner of Kendo from the east, who came to Stivale seeking change. He quickly discovers that the people of this country are much more openly sexual than he’s used to. Their lives also seem to be far from peaceful, he’s immediately warned upon his arrival to the hotel not to wander the streets at night, due to high crime rates in the city.

On his first night in town, Ryunosuke stumbles across a group of men attacking a young girl. Without much thought, he charges in and beats them up, only to find out that they were part of the local military police. Now marked as a fugitive, he finds out that the girl’s name is Serena and follows her to learn more about Stivale’s situation. The country’s current leader, Abbatini, was a minister of the previous dictator, whom he eventually betrayed. Through this method, he became a national hero, gaining the people’s trust. Taking over as the new head of state, he began spreading the ideology of promiscuism, believing that most trouble can be sorted out through sex.

While Abbatini’s policies soon began corrupting public morals, his military has been forcing the poor to work in brothels and heavy labor camps. Wanting to help his new friend and witness the future of Stivale for himself, Ryunosuke decides to stay, joining Serena in her effort to overthrow Abbatani’s ruling party. During their quest, players will guide Ryunosuke through Stivale while seeking allies and helping out people in need. Fox Girls Never Play Dirty features a traditional turn-based RPG battle system with unlockable classes that can be changed at will, as well as a skill tree system, allowing you to customize the playstyle of each party member to your liking.

It’s the mid-20th century. After finishing university, Ryunosuke isn’t sure what to do with his life, but he knows he needs a major change. He decides to take an extended vacation to Stivale, the boot of Europe, to discover what’s next for him. Upon arrival, he meets a fox-eared warrior named Serena who’s fighting to end the corruption that’s dogged her country since the Great War ended. Only together can they recruit a band of allies to stop the chancellor’s insane policies.

Fox Girls Never Play Dirty is now available on Steam, Denpasoft and Kagura Games for the promotional price of $17.99 until November 19th, at which point it will cost $19.99. Adult content for the Steam version of the game has to be installed separately, using a free patch available on the publisher’s website.