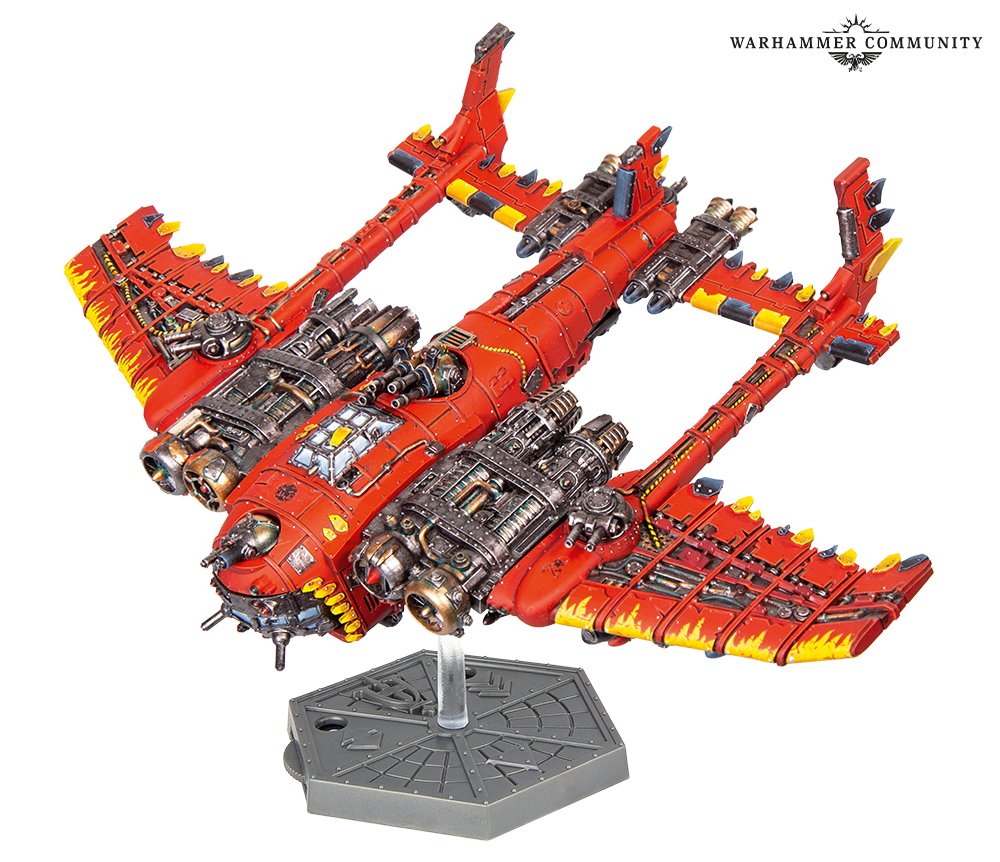 So Flight Plan surprised us this week, not with pictures of the Tau Drone Fighters and ground batteries that still haven’t been seen, but with the first super heavy bomber of Aeronautica Imperialis 2nd edition. Meet the Ork Mega Bommer: 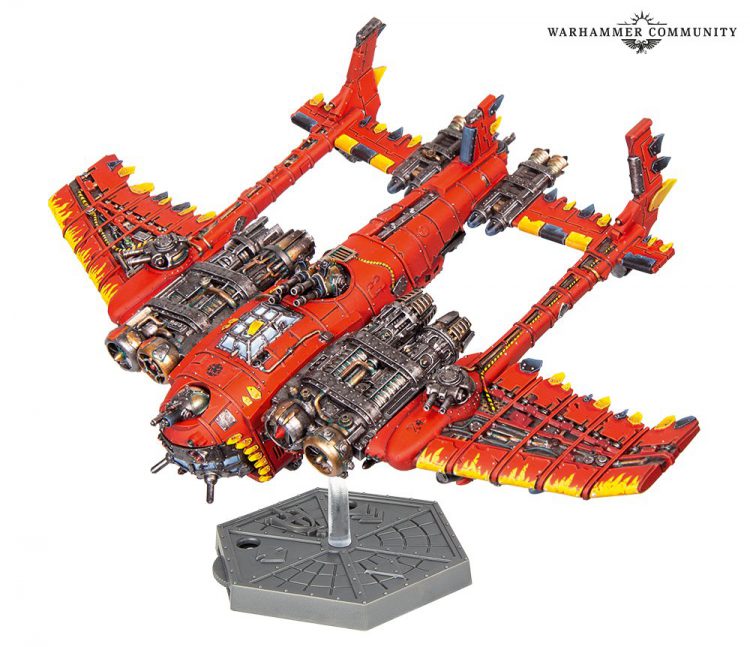 Well this looks like you paint it in sub-assemblies and then pin it together. Credit: Games Workshop

The Ork Mega Bommer (which looks a reasonable amount like the mega bommer that one of the community team, I think Ben Galler, put together during lockdown) is a new unit for Orks, rather than an update of an existing unit. It’s the biggest unit in the game, with twice the structure of a Tiger Shark or Marauder Destroyer.

The unit card similarly has some interesting clues to how super heavy units are handled in 2nd edition. 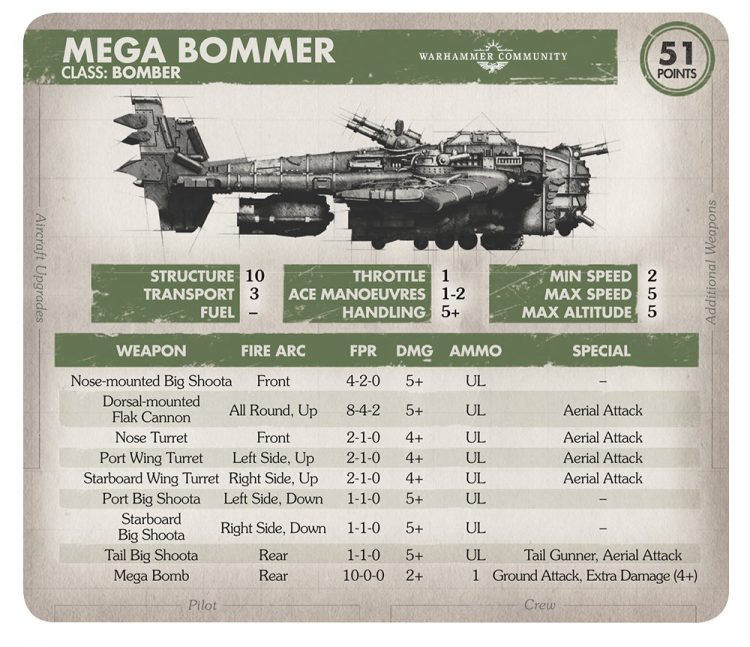 That’s a lot of dice.

Note the Pilot and Crew spaces, which basically tell you that super heavy units get pilot and crew options to give you additional rules to play with, very likely similar to the Ace Ability Cards and the Crew Cards seen in the preorder bonus with Wave 1 (which can be downloaded from the GW site still I believe).

Note also the Additional Weapons section that implies that you can add something extra. It could just be a space to put your big bomb and rokkit cards, or an additional option for customisation, and implies a larger reference card, possibly A6 or A5 size, for the super heavy units.

So here’s the key question.

Is a Mega Bommer worth taking in the game?

It can in fact go faster than an Eavy Bommer, with a max speed of five. It only has access to the first two maneuvres, meaning that changing direction is a little like dragging a brick through molasses, but this is the sort of unit that you should look at more as a mobile sky fortress. With guns covering every arc and at least nine dice of firepower at a target in any arc at the same altitude or above then it can compensate somewhat for it’s lack of movement flexibility with guns.

At 51 points with no upgrades it’s pricey, but in a 200 point game this would be less of an issue. If upgrades stay the same price then Extra Armour is pretty much a compulsory choice, and then you have to choose between Kustom Shootas and a Wazmek Speshul.

At that points cost you’ll be building the scenario around it. Your Mega Bommer will either nuke the ground targets you are after or go down in flames, and it might actually be a bit more points efficient to get a mega bomber than a flight of ground attack Fighta Bommers or two Eavy Bommers. If you are fielding Eavy Bommers then you don’t care about super ultra points efficiency anyway, so a Mega Bommer is a good alternative. 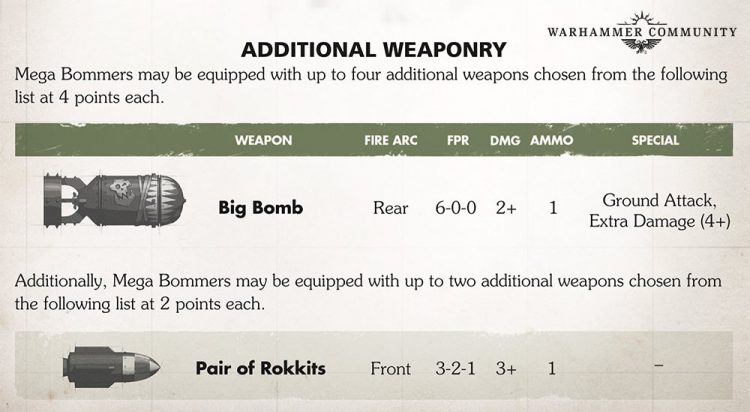 Pricey but so tempting.

The Mega Bommer can also take SIX ordnance items, four big bomms and two rokkits. The Mega Bomb the Mega Bommer carries rolls a fairly massive 10 dice, but you can get an additional 24 dice of bombs for obliterating any ground targets that need dealing with. Rokkits make getting in the front arc of a mega bomber at short range even more suicidal, but they’re cheap. Of course taking all this ordance adds 20 points to the cost of an already expensive plane.

I will be getting one, but it’s also a 61 piece Forgeworld resin model so it’ll be painted in sub-assemblies and then pinned together. Looking at the model pictured that is very likely how GW did it (body, 4 x engines, 2 x wings, all ordnance as individual pieces). Hopefully GW have listened to the feedback about the first two AI planes and there’ll be no print lines or moulding issues (though getting 61 perfectly cast resin pieces isn’t great odds).

What this means for the game?

Flight Plan said that there’d be another new thing next month, which could possibly be the Tau Manta, an announcement of a campaign book, or a tease of some stuff from Wave 3. I’ve got my fingers crossed for Hell Blades, but I’ve got a feeling we’re getting a super heavy supplement.

It looks like there might be a Wave 2.5, filling in the gaps of the first three factions (and Tau really do need the Orca to give them a good transport unit) with an accompanying book and most of the units in resin (I’d expect every super heavy bomber to be a FW unit because GW haven’t done any three sprue kits for AI, and even the larger units have been two half frames). If that happens we might see the Marauder Colossus, Tau Manta and Orca, and Ork Blitz Bommer, but hopefully we will see new units like the Mega Bommer to give us some things we haven’t seen before.

If that happens I really hope it won’t delay Wave 3, which should be giving us Chaos and Eldar, bringing in new players (there are people who play Elf bullshit in every GW game system, and if they play non-GW systems they find the closest approximation to Elf bullshit like Cryx) and adding variety to tournaments and events.

I’m eager to see what gets announced in next months flight plan, whether super heavy bombers are getting a supporting supplement and what else might be in there. I’m also hoping that a set of Matched Play scenarios are being worked on. The additional scenarios leaflet in the Skies of Fire box was a great addition

Have any questions or feedback? Drop a note in the comments below or email us at contact@goonhammer.com.