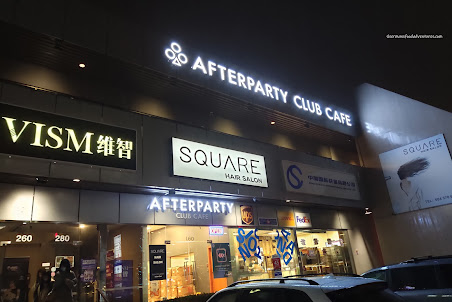 Sometimes, there are restaurants that serve amazing food but the decor consists of a few folding chairs and a mah jong table.  Oh, and the service?  Yah help yourself to the napkins (if there are any) and dirty utensils in a hopefully clean metal container.  Yes, those places have their charm, but most times, I want good food AND also an inviting decor as well as some form of service.  However, it is like you can't have both because you then have places that are high on style but low on food quality.  So I had to put this to the test when I got an invite from Afterparty Club Cafe.  You see, they have an impressive display of collectables when you first walk in and then further into the dining space, there are floor to ceiling shelves of books.  Very impressive.  But how about the food? 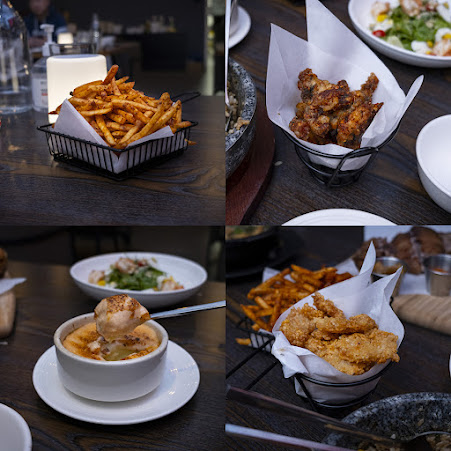 We ordered a few items, but they decided to throw almost the kitchen sink at us with a table full of food.  The Dirty Fries were still crispy even though we had taken plenty of photos before digging in.  There was good spice and they weren't greasy.   A touch greasy, the Fried Frog Legs were crispy and nicely seasoned.  The meat was tender and moist.  Something a bit unique was the Mentaiko Potato that featured mashed potatoes topped with a creamy mentaiko sauce.  I thought the seafoodiness of the sauce was appealing.  Mashed potatoes could've been creamier.  I found the Salted Duck Yolk Rice Cracker to be crispy and fairly well-seasoned, but a bit more salted egg yolk flavour would've really put it over the top. 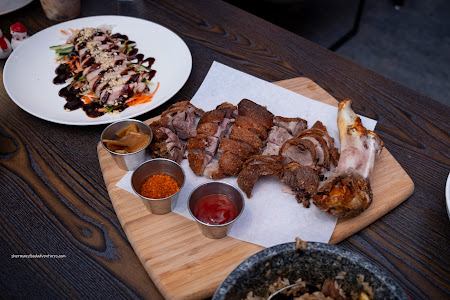 Carved tableside, the Champion Pork Hock was quite the specimen.  After it was deboned and cut, there was a lot of meat for our table of 5.  The meat itself was tender and gelatinous while the skin was crunchy.  Some parts were a bit hard, but nothing got soft, which is good.  The way they prepared it, there wasn't a lot of fat underneath the crunchy skin, which I much prefer.  To add more flavour, I liked dusting it with the spicy seasoning on the side. 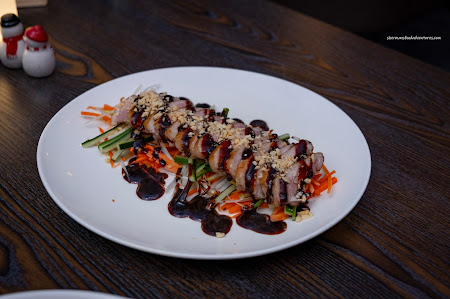 Presented underneath a glass klosche with smoke, the Beijing Smoked Duck Breast was accompanied by julienned veggied underneath and what was a sweet sauce akin to hoisin on top.  I thought the smoke was mild while the duck itself was natural tasting.  The skin could've been more rendered in my opinion, but it wasn't too fatty.  The duck itself was tender and quite moist. 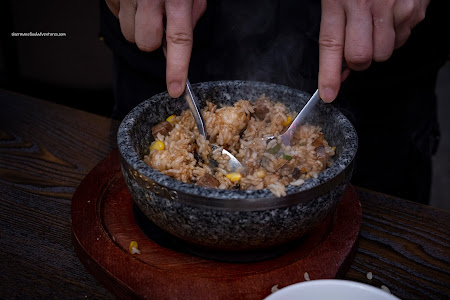 Another dish served tableside was the Truffle Oil Diced Beef Rice prepared in a heated stone bowl.  The rice was mixed at our table and there was a moderate socarrat at the bottom of the bowl while the rest of the rice was fairly dry and nutty.  There was a decent amount of truffle oil, but not overwhelmingly so.  The beef was in small cubes and was fairly tender if not a touch dry.  Maybe bigger cubes would be better? 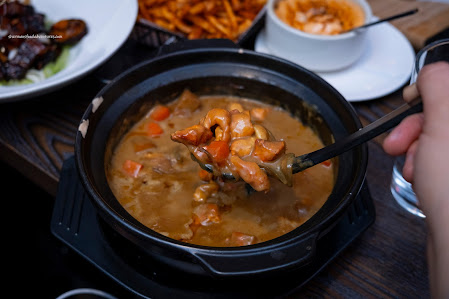 I used this rice to pair with the Westcoast Curry which was very mild and had the aromatics of coconut milk.  There was some soft veggies in the mix as well as nuggets of chicken.  I found the chicken to be tender despite being small in size.  In terms of viscosity, the curry was silky and medium-thickness.  It mixed with the rice well and did provide some flavour that was mild as mentioned as well as sweet. 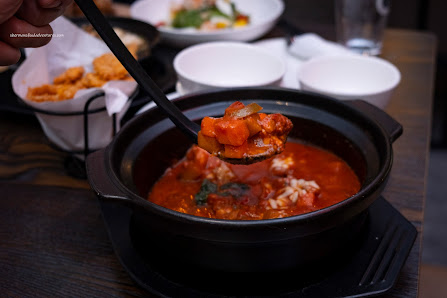 Another saucy dish was the Tomato Braised Chicken also with veggies and a light sprinkle of cheese on top.  I guess the best way to describe this dish is to compare it to HK Cafe-type flavours of tomato sauces.  It was tangy, but also sweet with a touch of cheesiness.  The veggies were soft but soaked up the flavours while the chicken was tender and also took on the tomatoness of the dish. 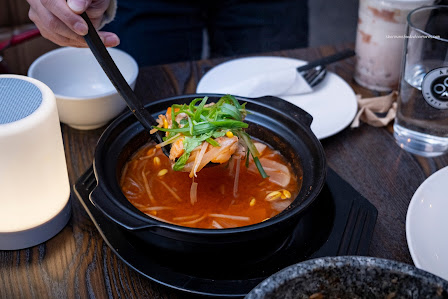 Onto another item served in a hot pot, we found the Braised Cod Soup that also featured plenty of veggies.  Hidden at the bottom of the pot, there was a cod steak that was fairly flaky, especially since it had been sitting in hot broth for awhile.  The broth itself was generally light with only the slightest of fish flavour.  It was lightly sweet with equal parts of savouriness.  Not sure if all that onion belonged in the soup, but that's just my preference. 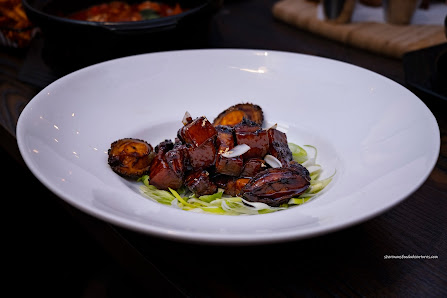 One of my favourite dishes of the meal was the Slow Braised Pork Belly with Abalone.  I found the pork belly to be equally fatty and meaty.  Generally I don't like chomping down on big chunks of fat unless it is prepared properly.  This was and the fat was more gelatinous than fatty.  Although there might've not been any in the glaze, if tasted like there was black garlic due to some umaminess.  Whatever the case, the dish was well-seasoned. 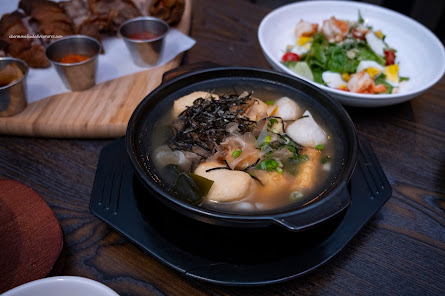 When we were presented with the Tea Tankotaki, it looked more like oden than an udon dish, but alas it was.  Underneath all those processed fish products was indeed udon.  I must say there was a good array of some of the most appealing fish dumpling/balls that one can find.  As for the broth, it was clean and light with a touch of sweetness. 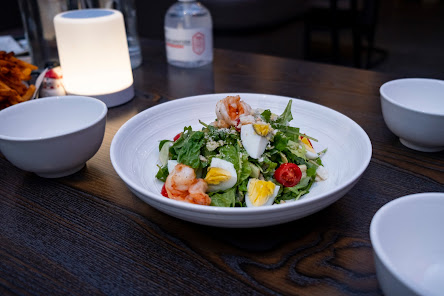 I'm not sure why I'm ending this post off with the APC Salad, but probably there isn't much to say about it.  I mean the greens were fresh and there was enough vinagrette.  Prawns were sweet with a snap too.  maybe the egg could've been cooked less, but it was a pleasant salad.  I guess that would be the theme of the food too.  It was pleasant enough with a few highlights.  Considering the decor and ambiance of the place, the food is decent enough to put it into the good category.

*All food and beverages were complimentary*

The Good:
- Appealing decor and dining space
- Food is decent

The Bad:
- Faces a lot of competition in Richmond
Source: shermansfoodadventures.com