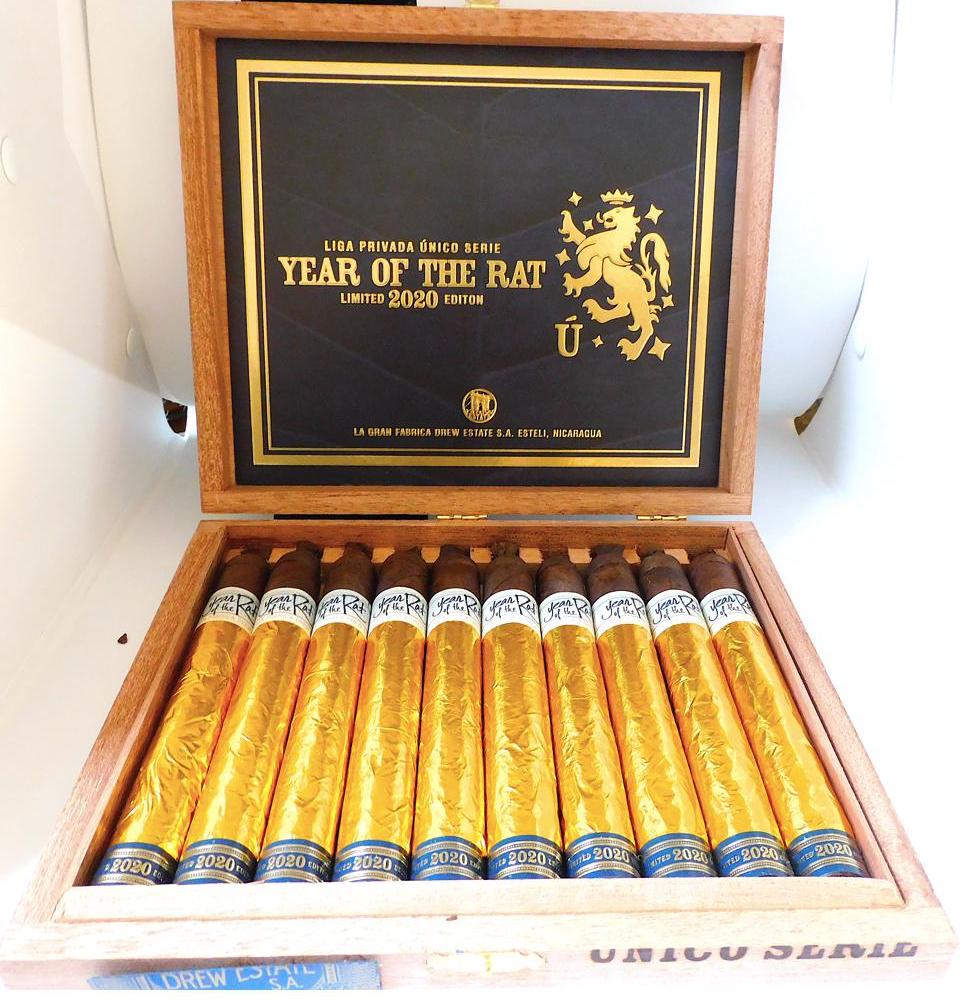 Agile Cigar Reviews are cigar assessments where we use a lightweight, shorter format. These will never take the place of our comprehensive reviews. They are only used on blends we have previously assessed. This might be a blend we are rescoring or giving a score for the first time. It might be a blend we are looking at in a different size. Today we look at the  Liga Privada Unico Serie Year of the Rat by Drew Estate. This is a cigar we previously assessed back in April 2016.

Over the past decade, the Liga Privada brand has established itself as Drew Estate’s premium cigar brand. In addition to some of the core brands such as Liga Privada No. 9 and Liga Privada T52, there is the Liga Privada Unico Serie. Each cigar in the line features a unique blend in a different size. All of the cigars in the series are more limited and small batch in production. Some of the releases are even more limited than others. Many of the Unico Serie cigars have some ties to Liga Privada No. 9 or Liga Privada T52 in terms of the tobaccos used. One of the most limited releases was the Liga Privada Year of the Rat. It was originally released as a lounge exclusive for a short time at the BB&T Center in Sunrise Florida, home of the Florida Panthers. After being out of production for a while, the Year of the Rat was made available as a cigar that could be obtained at Drew Estate events. It was still a relatively limited cigar. Today we revisit the 2020 version of that cigar. The Year of the Rat is an appropriate name for this particular project. There are several ties with Drew Estate and the Florida Panthers that are captured by this name.

The Liga Privada Year of the Rat consists of a Connecticut Broadleaf wrapper, a Brazilian binder, and fillers from Nicaragua and Honduras. The cigar comes in one size – a 5 1/2 x 46 Corona Gorda. While it was made available in ten-count boxes, most retailers did not receive many. While the DNA components of the Year of the Rat remain the same as the 2016 release, the packaging was upgraded for 2020. The big change is the gold foil sleeve that covers the majority of the cigar. The Liga Privada Unico Serie Year of the Rat 2020 edition started out with a burst of cocoa along with notes of white pepper, black cherry sweetness, and earth. The retro-hale delivered a combination of mixed pepper and cedar. The black pepper notes initially displaced the cocoa notes. As the cigar moved through the second third, the black cherry was displaced by the earth notes. The second half of the Year of the Rat saw an increase in the pepper and cedar and that eventually moved into the forefront by the final third. The final third of the cigar exhibited some harshness. Overall the cigar delivered a medium to full experience in terms of strength and body. The body did increase into full territory by the last third. Both the burn and draw performed excellently.

The Liga Privada Unico Serie Year of the Rat is a good cigar, but I smoked several of the 2016 release and I still would put the 2016 ahead of the 2020 edition. Flavor-wise the first two-thirds of the 2020 edition were excellent. While the harshness wasn’t overpowering in the last third, it still affected the overall smoking experience. It’s also worth noting the construction was top-notch and it’s what I would expect from a near $16.00  In the end the positives outweighed the minuses. It’s a cigar I would probably recommend to a more seasoned cigar enthusiast. As for myself, it’s a unique cigar and one I would buy again and smoke.