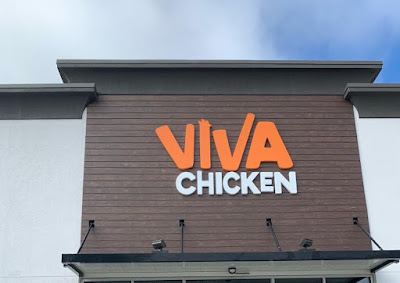 Viva Chicken, a growing chain of Peruvian chicken restaurants, has secured a second Atlanta area location for their upcoming Georgia debut.  In addition to the previously announced location on Barrett Parkway in Kennesaw, Viva Chicken will also open alongside Cleaver & Cork on Haynes Bridge Road in Alpharetta.  Viva's roughly 2,600 square foot space, which will be built in the new year, is adjacent to Cleaver & Cork and occupies what was once part of the patio of former restaurant tenant Alpha Soda.

Based in Charlotte, North Carolina, Viva Chicken is a fast casual restaurant which specializes in Peruvian rotisserie chicken.

The new Alpharetta location will likely be the sixteenth overall for the chain which operates twelve locations in North and South Carolina as well as a single unit in St. George, a city in southwestern Utah.  A new Viva Chicken is slated to open December 16 in Summerville, South Carolina, in the greater Charleston vicinity.  Real estate sources tell ToNeTo Atlanta that Viva Chicken is evaluating several other sites including a second unit in Cobb County.

Chef Bruno Macchiavello, a native of Peru, and business partner Randy Garcia, opened the first Viva Chicken in the Elizabeth neighborhood of Charlotte in 2013.  The restaurant, which builds on Macchiavello's family recipes, is most known for their pollo a la brasa, or rotisserie chicken, which is marinated in a Peruvian spice mix for 24 hours before being cooked in a handmade charcoal-fired oven imported from Lima, Peru.  Diners can select a quarter, half, or whole chicken, each accompanied by a variety of sides ranging from sweet potato fries and plantains to chicken soup and canary beans. 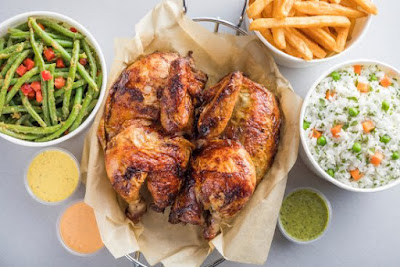 The restaurant also prides itself on offering several house-made sauces such the mild aji amarillo sauce, the hotter huacatay sauce (with mint, cilantro, and jalapeño), and the spiciest of all, gringo killer, with red Peruvian hot pepper.  The restaurant also offers several sandwiches, salads and bowls, in addition to a kids' menu.

Dessert options include a churro (where 50 cents from each sale is donated to No Kid Hungry) and tres leches, in addition to house-made drink options such as herbal limeade and Chicha Morada (with Peruvian purple corn, cinnamon, clove, pineapple, apple and lime).