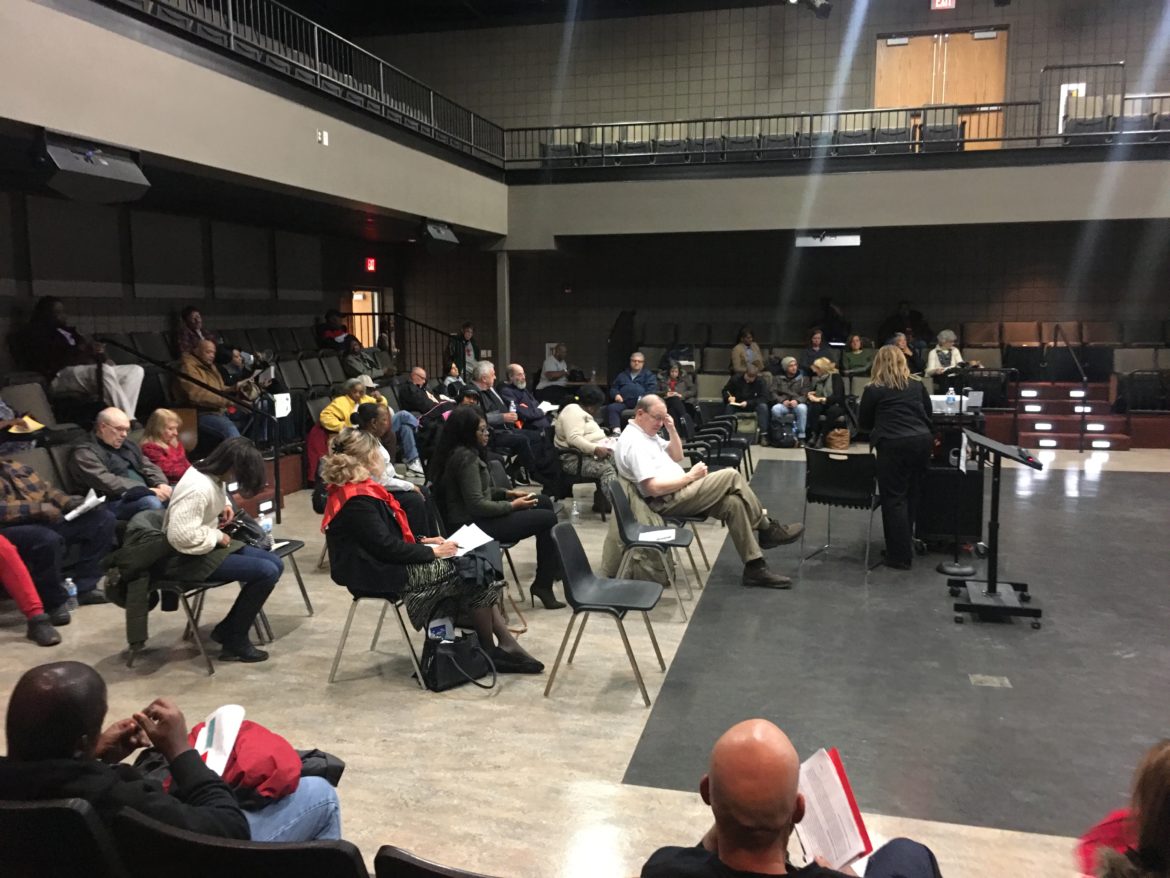 Community members from Aliquippa raised questions and concerns Thursday about whether its residents will benefit from the economic boom that corporate and government leaders say will come after the construction of Shell’s ethane cracker plant is complete.

At a community meeting, Shell representatives told about 65 people that the company was ramping up its hiring.

“We’re getting prepared to operate. It means pretty much we are hiring a bunch of people,” Jeff Krafve, the asset general manager at Shell, told the crowd gathered within the Aliquippa Jr./Sr. High School. “We hired 100 within the last three weeks. We are now at over 330. We are on our way to 600.”

But as some residents started milling around the informational booths set up, they had questions about what benefits they might experience.

“How many of these jobs are local people?” asked Lorenzo Williams, a retired Aliquippa resident. “I see buses going down the road, bringing people in and out. I see cars from all over, like Louisiana. I’d like to see that investment impact locally here.”

Williams said he only knows one local person who works at the plant construction site right now: his wife’s cousin, a carpenter who puts up scaffolding, who was originally from Beaver County but now lives near Pittsburgh. The company says there will be around 6,000 construction jobs during the peak of construction this year.

“It appears we are the backdrop of other people’s dreams,” he said. 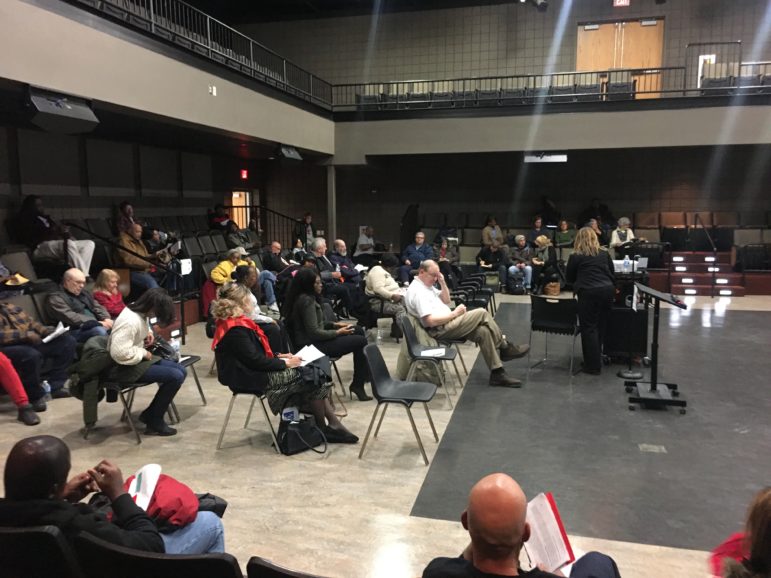 About 65 residents showed up Thursday evening to hear Shell representatives speak about job opportunities and the environmental impact of the cracker plant under construction in Beaver County. (Photo by Oliver Morrison/PublicSource)

Michael Marr, the external relations advisor for the Shell Pennsylvania Project, said he didn’t know exactly how many local residents had been hired from Beaver County or Pennsylvania but said the majority were from surrounding areas, including Ohio.

Dwan Walker, the mayor of Aliquippa, attended to find out if residents will have training opportunities and if the workforce would be diverse. Right now, he said, the workforce didn’t look diverse to him.

“Are they actively seeking diversity?” he asked. “Is there a clear road to success? How are those jobs being presented to the people of color and the contractors of color?”

Over the next two years, Walker said, he hopes the company will do as much to help the Black residents of his city as the company said it is commiting to environmental concerns. “They’re doing their best for the environment but we need some people movement, some jobs to help take care of the city,” Walker said. “I want people to say my city is going to rise.”

Marr said he didn’t have data on the diversity of the workforce at the cracker plant so far. “We are definitely committed to diversity,” he said. “We operate all over the world and think it’s a key strength for us and continued improvement in diversity is an ongoing need as well.”

Aileen Gilbert, a member of the Aliquippa school board, is pleased that Shell donated $25,000 to bring STEM enrichment and a science library to the district and another $30,000 to update the athletic field house. But one of the main reasons she came to the meeting, she said, was to ask if Shell could also pay for a new football field and track.

“We get a lot of requests for social investment,” Marr said.

Gilbert received an informational card in the mail just three days before the event. She worries that many people who could have benefited the most, didn’t show up: “The people who should be here, aren’t here: the people who don’t have a job.”

Many of them have been out of the workforce or are working part time, she said, and they need help getting back into the workforce. There isn’t a bus to take residents back and forth to work if they were hired, she said.

Cheryl King, the executive director of the Franklin Center, a social services agency in town that serves all of Beaver County, said she’s posted cracker plant jobs that she’s seen but still doesn’t know anyone who has been hired for those jobs.

Marr said the company put out a deck of trading cards, like baseball cards, to help people understand how to get the jobs that would be available. On the front of the cards are pictures of people doing the jobs that Shell needs people to fill. On the back is a salary range, a description of what the job entails and the  kind of education or training needed. Of the 18 jobs highlighted, eight require a four-year degree, seven require training at a community college and three require applicants to be members of the Builder’s Guild of Western PA.

There are 70 to 100 jobs that will be hiring soon and only require a high school education, Marr said. “Once those rail cars hit the plant, somebody needs to move them around and that’s what we’re going to do,” Robert Combel,  the rail switching lead for the Petroleum Services Corporation, told the crowd. The company will be responsible for hiring those jobs.

Donald Walker, a city council member and the twin brother of the mayor, said his son’s baseball coach was working at the cracker plant as a laborer and liked his job better than when he worked for a waste management company at a desk. Walker was at the meeting to provide information that he could relay to young people in the community about jobs. He learned that there would be a job training at the Community College of Beaver County on Wednesday. “All the jobs down there will be union jobs so you can’t just walk in their willy-nilly,” he said. 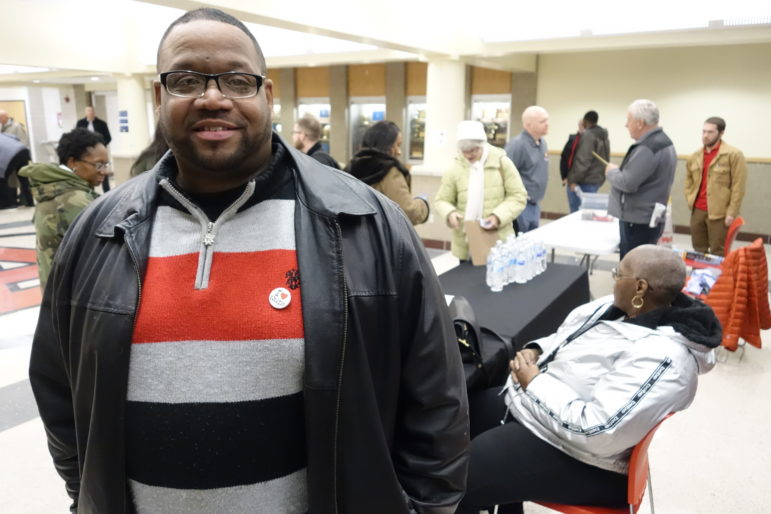 Aliquippa Mayor Dwan Walker wants to make sure that city residents will be picked for some of the 600 full-time positions that Shell says it will hire to work at the Beaver County cracker plant. (Photo by Oliver Morrison/PublicSource)

Last February, Shell donated $1 million to the college in scholarships and to create the Shell Center for Process Technology Education.

Mayor Walker said what happens next is critical for how he will view the cracker plant’s success. “It’s always good to have meetings. It’s more important that people get jobs,” he said, “that it’s not just a dog and pony show, that it’s really going to benefit the residents of Beaver County.”

Shell is holding another community meeting at 6:30 p.m. Nov. 21 in Monaca at the old elementary school at 998 Indiana Ave.

Oliver Morrison is PublicSource’s environment and health reporter. He can be reached at oliver@publicsource.org or on Twitter @ORMorrison.

The post Aliquippa residents question if the promised boom from the Shell cracker plant will benefit them appeared first on PublicSource | News for a better Pittsburgh.