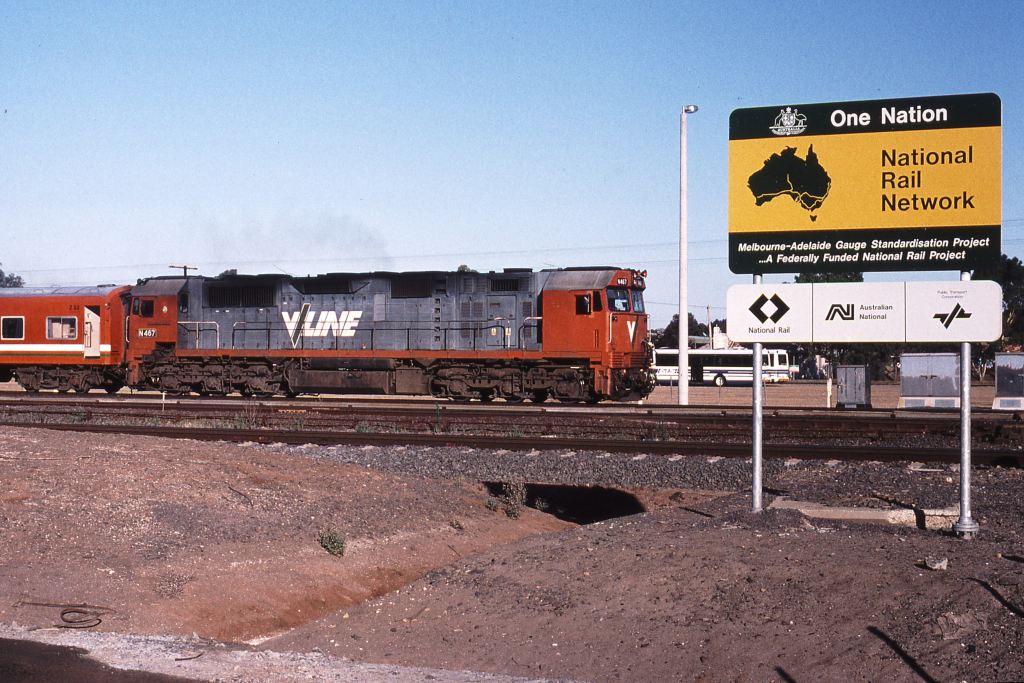 All aboard the other ‘One Nation’ train

When most Australians hear ‘One Nation’ they only think of one thing: the political party founded in 1997 which helped lead Australian politics into the racist sewer that is today. But the ‘One Nation’ name had been used before then – for an economic stimulus package in the aftermath of the early 1990s recession. 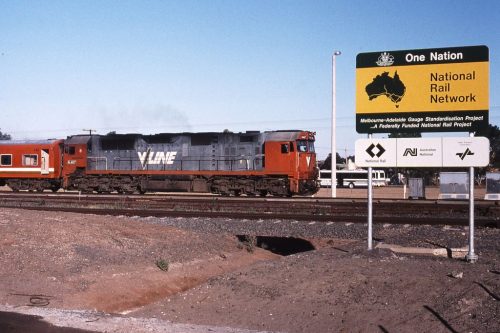 The One Nation package was launched by then-Prime Minister Paul Keating in a policy statement delivered on 26 February 1992.

After seven years of growth, Australians are now experiencing hard times. Nearly a million people are out of work. Families are worried about the future.

This Statement explains what the Keating Government will do to bring back jobs and prosperity.

It shows how the Government will quickly get things moving again by boosting private spending and boosting big public investment projects.

It included a package of direct stimulus payments, and reform to the tax system, industrial relations, and competition policy.

We will give spending an immediate shot in the arm by making a special one-off payment to families with children. We will increase spending to help the unemployed back into jobs and offer special help to farmers hit by poor seasons and poor prices.

At the same time as we give immediate help, we will lay down the framework for a stronger and more prosperous society. The reforms to the business tax system will encourage firms to invest in new machines, new equipment and new factories to house them.

Changes in the aviation and electricity industries will increase competition and lower costs. The encouragement we will give to workplace bargaining will continue the revolution in our industrial relations, which has already seen a new spirit of cooperation unimaginable a decade ago.

And the reason I first noticed the package – upgrades to freight rail.

So what rail upgrades were included?

Attachment C of the policy statement lists the projects that made up the One Nation package.

Investment in a National Rail Network
The Government proposes to provide up to $454m to secure an upgraded standard gauge rail network to provide reliable services from Brisbane to Perth, including efficient connections to ports. Individual projects include:

• Sydney-Melbourne ($181m)
Construction of passing loops, replacement of wooden bridges, resleepering and the construction of a dedicated freight line from Campbelltown to the Enfield terminal in Sydney

The BBC Program will be refocussed, through negotiation with States and Territories, to enhance its infrastructure component. Projects to be funded under the Program include infrastructure provisions for the Multi-Function Polls in SA, extension of the Brisbane-Gold Coast railway from Beenleigh to Robina, upgrading of the Geelong-Werribee-Melbourne rail link and construction of railway stations and expanded modal interchange facilities on the Pakenham and Cranbourne lines in Victoria.

The Commonwealth will support the development of common user facilities at Sydney and Melbourne Airports by the Federal Airports Corporation (FAC) and will negotiate with the FAC to ensure their early completion. The assistance required by the FAC from the Government will be subject to commercial negotiation and cannot be specified. The Government will also liaise with the FAC regarding the need for subsequent development of such facilities at Adelaide, Perth and Coolangatta Airports.

And some road projects I didn’t realise were part of the same stimulus package.

The Black Spots Program is directed towards road sites where inadequacies in the existing facilities have led to poor crash records. The Government has decided to provide an additional $25m in 1991-92 and $45m in 1992-93 for this program, bringing to $180m the amount to be spent on the program over the three years since 1990-91.

More than 800 additional projects will be undertaken. All projects will have high benefit-cost ratios, have short lead times, and will generate considerable employment opportunities spread widely across urban as well as rural and remote regions.

The short-term $255m funding boost will be used to address the major deficiencies in the network. Expenditure will be directed to maintenance and upgrading of the National Highway and other high priority construction projects such as the Kakadu Highway, upgrading the Princes Freeway West and the duplication of Portarlington Road, both in Victoria.

• Victoria – Western Ring Road ($75m)
Work on the Ring Road is divided into four stages – the first stage, linking the Hume Highway and the Tullamarine Freeway, will be completed later this year. Stage 2, which upgrades the link between the Calder Highway and the Western Highway will be accelerated so that it is completed by the end of 1993-94. By that time it is expected that the major structures (eg: interchanges) associated with Stage 3 (linking the Princes Freeway to the Western Highway) would be completed, with traffic flowing on the entire ring route via upgraded roads in the remaining stages

• Port of Brisbane Link ($40m)
This route provides a 41km link from the existing National Highway at Ipswich to the port at Fisherman Island. Upgrading this route as a major transport link to the port will take over ten years. The additional funds provided by the Government will, however, accelerate the high priority projects such as grade separated interchanges.

• Liverpool-Hornsby Ring Road (Sydney) ($25m)
This route provides a direct link between the Hume Highway at Liverpool and the Sydney-Newcastle Freeway. The additional Government funding for this project will enable the completion of the section covered by Pennant Hills Road, upgrading it to six lanes and improving the existing arterial routes. These measures will assist in relieving the traffic pressure on these roads.

So what was actually delivered

The gauge standardisation of the Melbourne – Adelaide railway was the big ticket item, and delivered a third track between Newport and Geelong, and gauge conversion west to Adelaide. 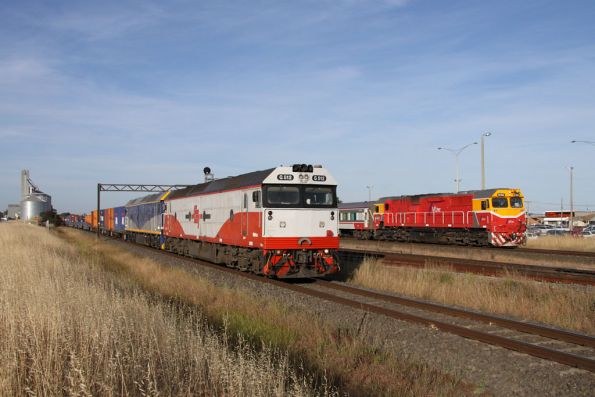 But the work left much to be desired – cost overruns saw funding diverted from other One Nation projects, the track on the Gheringhap-Maroona section had to be upgraded in 2000 to meet mainline standards, and a lack of crossing loops and use of the inefficient ‘Section Authority Working’ safeworking system limited the number of trains able to use the line – flaws not addressed until 2010.

The scope of the Sydney-Melbourne package was also slashed, with the dedicated freight line from Campbelltown to the Enfield terminal abandoned because the cost exceeded the available funds. 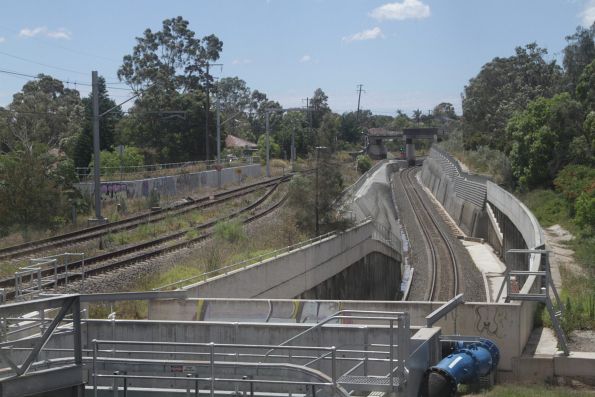 The dedicated freight link wasn’t delivered until 2013, when the
Southern Sydney Freight Line was completed.

And the scope of upgrades to the Sydney-Brisbane line was also cut to virtually nothing.

Photo by Ellis678, via Wikimedia Commons

Just two deviations totalling 9.8 km in length were built, resulting in a saving of 0.9 km on the intercapital journey.

Today, none of the ‘One Nation’ signs are left beside the Melbourne-Adelaide railway. 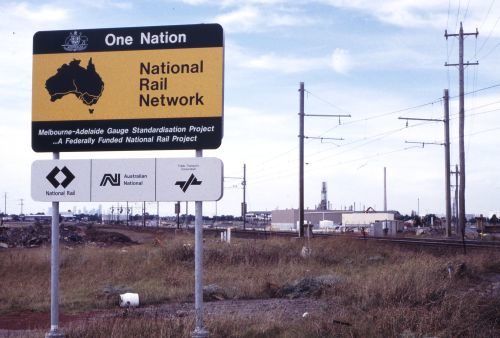 But at the Melbourne Freight Terminal at South Dynon the ‘One Nation’ name lives on. 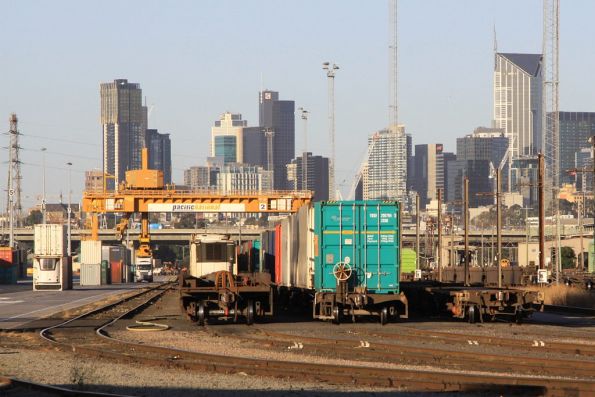 A plaque marking the opening of the upgraded Melbourne Freight Terminal by National Rail on 15 July 1994. 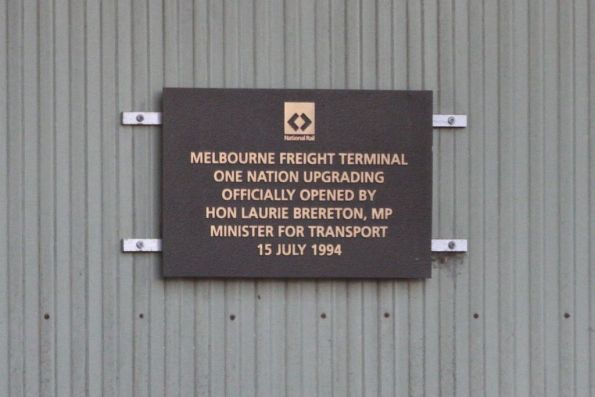 And a ‘KM Zero’ plaque unveiled by Paul Keating in 1995 to mark the completion of standard gauge tracks across Australia. 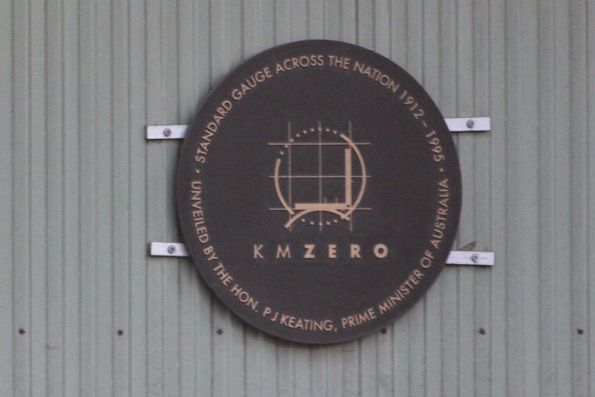 A process started in 1912 with the Trans-Australian Railway.

But was it worth it?

State Rail NSW had this to say following the completion of the project in 1995.

National Rail were driven by the time and cost criteria and although they expounded the virtues of contracting to which they were committed, when challenged by SRA on the standard of the product NR were proposing to hand over, the answer, because of fund constraints, was “Its better than what you had before”

Had One Nation been a $1Billion over 10 years (similar to road funding) then projects like the Bethungra spiral may have been a major deviation ( $13M ) rather than a rectification on the existing alignment ( $6M ). The Wagga Viaduct may have been a new bridge ($ 30M ) with improved alignment and grade instead of a tarting up and strengthening of the old structure ( $7M ), and the list goes on.

Meanwhile gauge conversion of the Melbourne-Adelaide railway was a case of swings and roundabouts – direct Melbourne-Perth and Melbourne-Brisbane services are now possible, but steel traffic to Hastings still needs to be gauge converted. 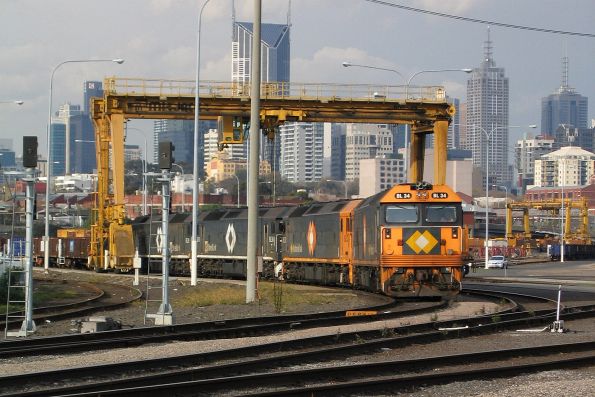 Grain on the Portland, Yaapeet and Hopetoun lines can run thanks to those branches also being gauge converted, but the line Mount Gambier wasn’t, and had has lay idle ever since. 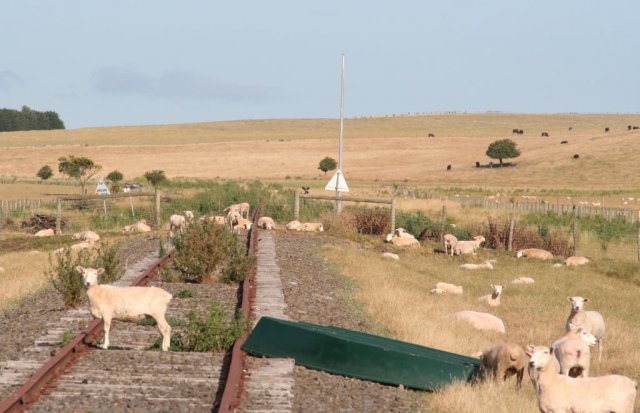 And the question of gauge across the rest of Victoria is still unsolved – after years of stalling, in 2016 work started on the Murray Basin Rail Project, only for funding to run out midway through.

The post All aboard the other ‘One Nation’ train appeared first on Waking up in Geelong.

All aboard the other ‘One Nation’ train