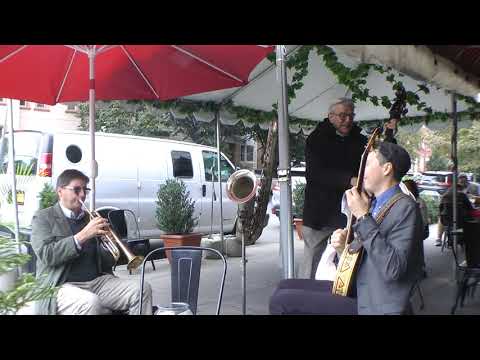 Last Sunday was my second visit to Giovanni’s — reachable from the F train — and I had a wonderful time. I know the three luminaries above, and so I was encouraged to set up my camera and I was able, through decades of experience, to eat and film at the same time without my camera descending into the soup or pasta. (By the way, the food is excellent, and I am fussy.)

The band played three sets from noon to 3, with jazz classics, Berlin, Carmichael, Waller, Shelton Brooks, and more: a hugely entertaining trio. Passers-by danced on the sidewalk; people applauded, and money was placed in the tip jar, which all combined to suggest that Western civilization is not moving into the abyss in fourth gear.

I have only one performance to share with you at the moment, but there will be more.

It was the first tune of the afternoon, and I was slightly unready, so the camera sniffs around before it finds the best spot, but I am so charmed by this rendition of Irving Berlin’s ALWAYS that I wouldn’t want a second take.

Arnt is a very discerning banjoist — no flash and smash for him — a “one-man rhythm gang,” and a sweet candid elegant singer. If you don’t know the excellence of Vince Giordano, on display in so many ways for a number of years, I have to ask (in the words of Cole Porter) “Where have you been?” with the emphasis on the second word. He drives any band with his gleaming aluminum string bass; he is Rollini-eloquent on the bass saxophone, and a fine swinging singer. (Incidentally, the Nighthawks have been performing for several Monday and Tuesday nights at Bond 45, so you now have a place to go to for Vince’s full orchestra, which has been greatly missed.) Danny is a brassman other trumpet players praise for his direct melodic lyricism: quite a band!

ALWAYS. And here, children, comes the lesson. Establishments like Giovanni’s employ live musicians because they know (and hope) that music played by human beings will attract people to come and dine and spend money, thus allowing the restaurant to continue, to pay its bills, its staff, its vendors. Business, and nothing shameful about it. (I commend them: it would be so much easier to NOT employ human beings who make music.) In doing so, however, they send joy into the air. Even the people at the next table who seemed to pay no attention to the music knew in some visceral way that their eggs Benedict tasted better because of the genuine soundtrack. And they give the musicians we love funding and employment.

I trust you can see where this is heading. I write to the people who live near someplace where live music is played, who can spend money for their morning coffee, their croissant, or the like.

I think, perhaps immodestly, that in creating and posting these videos I am doing a service to the music and the musicians. (I also put money in the tip jar and I buy food and drink at any establishment I frequent.) Your watching the video is spiritually lovely; you receive the good spiritual vibrations the musicians create and transmit.

But merely watching the videos at home and never actively supporting the establishments that feature live music does little for the economic realities of the situation described above.

I do not call for moral self-flagellation if you can’t get out of the house or you can’t afford to pay for a jazz brunch: some dear friends fall into this category. But I see so few self-defined “jazz fans” actively supporting the music by their presence on a regular basis.

YouTube and Spotify do nothing for the artists. And, for better or worse, buying a CD or paying for a digital download of your departed hero does nothing for living artists who are trying to stay solvent. When some “fans” ask mournfully, “How come there’s no live jazz at X’s anymore?” the answer will be found by looking in the medicine-chest mirror. I understand “I hope to get to New York City sometime soon,” as a reality, but it doesn’t help any musician pay her rent. As Greely Walton always used to say, “You can’t drive the car if you don’t fill the tank.”

I know, I get carried away, but ask any musician if this is true. You may go now.