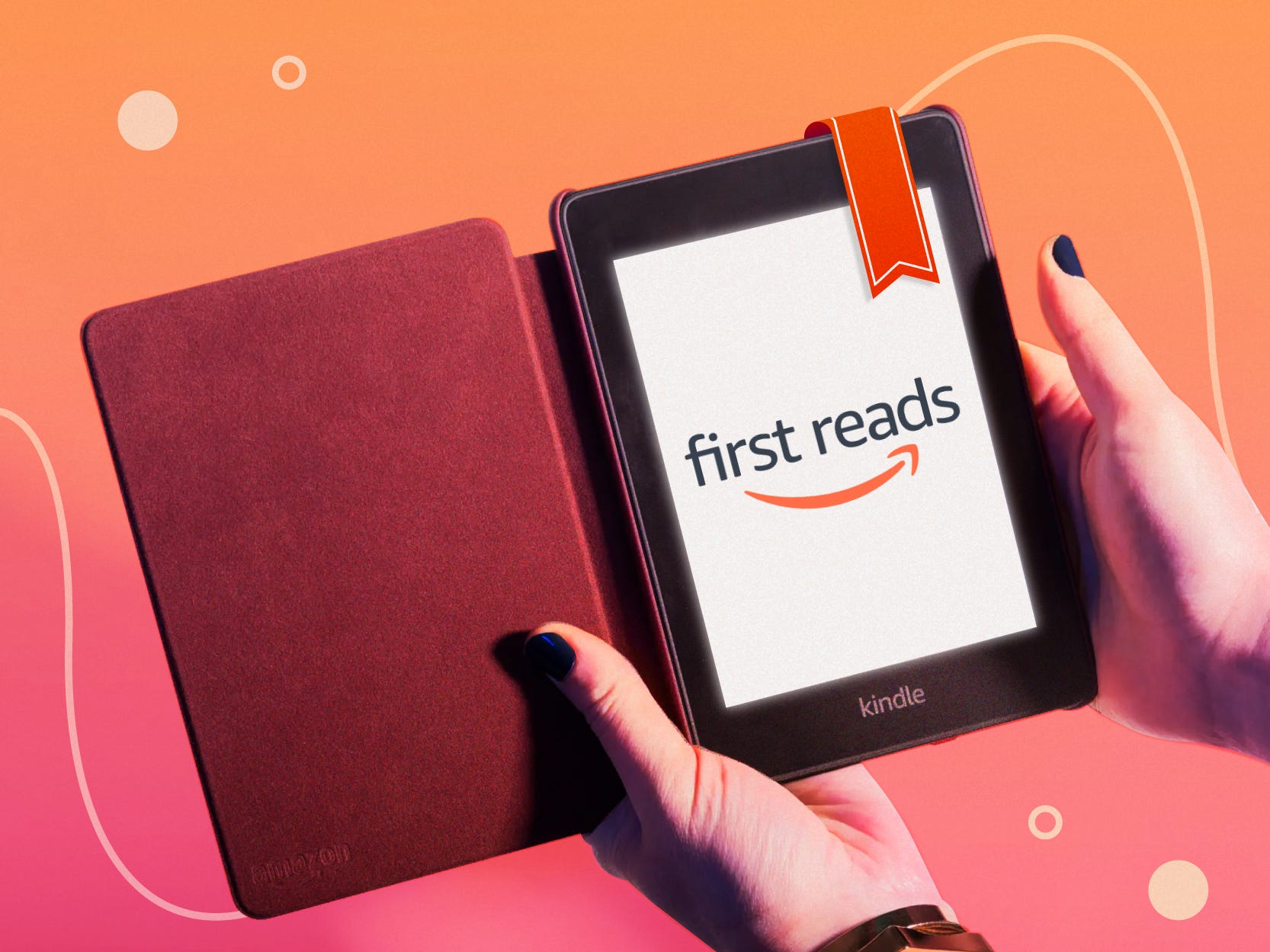 What Is Amazon First Reads?

Amazon First Reads is a service where Amazon Prime members get early access to upcoming books for free, a month before they're officially published.

With rotating titles from popular genres like true crime, romantic comedy, and Book Club fiction, Prime members can read a title from their favorite genre or discover something new.

Do you have to be a Prime member to use Amazon First Reads?

As an added bonus, Kindle Unlimited members can read most of the previous First Reads picks for free.

How does Amazon First Reads work?

All the books on Amazon First Reads are from Amazon Publishing and are ebooks only. While you can only choose one book per month, you can download it on your Kindle or your Kindle app so you can read it on any device that's compatible.

If you have a Prime membership, you can access select additional titles for free and get an occasional discounted bonus offer. This month, you can snag the Kindle editions of "Count the Ways" by Joyce Maynard for $4.99 and "Quicksilver" by Dean Koontz for $6.99.

Some months, Amazon will also offer print editions of the books for $9.99.

Descriptions are provided by Amazon and lightly edited for clarity.

Countersurveillance expert Devin Gray is unwittingly thrown headfirst into dangerous new territory after the death of his mother. Helen Gray, a paranoid and disgraced former CIA officer, believed she was on the verge of preventing a national catastrophe — a mission worth dying for. Others, including Devin, believe she was chasing delusions. Until he finds what she left behind.

With the help of longtime friend and former Marine helicopter pilot Marnie Young and a loyal team of covert operatives Helen summoned just before her death, Devin is propelled into a high-stakes chase across the country. What he uncovers, clue by clue, is a conspiracy more widespread and insidious than anyone could have imagined.

Now it's Devin's mission to destroy a covert network poised to deliver a fatal blow to the future of the United States. And also to vindicate his mother, by seeing the mission through to its treacherous end.

"The Night Burns Bright: A Novel" by Ross Barkan

Lucien has everything he needs: a loving mama, a library full of books, and House of Earth, a private school nestled safely in the woods of upstate New York. It's where Lucien is taught the importance of living in harmony with nature and building a peaceful and sustainable future. But when his youthful curiosity draws him into town and to Gabrielle, a public-school student living a life wholly different from his own, Lucien's inquisitiveness about life beyond the commune and questions regarding the events of 9/11 threaten to unbalance everything he thought he knew.

Slowly, things begin to change at House of Earth. The outside world is off-limits. Security measures tighten. New rules are put in place, and anyone who violates them is asked to leave and never spoken of again.

As forbidden questions pile up, Lucien's willingness to obey weakens. Continuing to meet Gabrielle in secret only reinforces his gnawing fear that something about his world is terribly wrong. Unable to remain silent any longer, Lucien will soon discover that looking for answers at House of Earth may be the most dangerous rule he can break.

"The Lobotomist's Wife: A Novel" by Samantha Greene Woodruff

Since her brother took his life after WWI, Ruth Emeraldine has had one goal: to help those suffering from mental illness. Then she falls in love with charismatic Robert Apter — a brilliant doctor championing a radical new treatment, the lobotomy. Ruth believes in it as a miracle treatment and in Robert as its genius pioneer. But as her husband spirals into deluded megalomania, Ruth can't ignore her growing suspicions. Robert is operating on patients recklessly, often with horrific results. And a vulnerable young mother, Margaret Baxter, is poised to be his next victim.

Margaret can barely get out of bed, let alone care for her infant. When Dr. Apter diagnoses her with the baby blues and proposes a lobotomy, she believes the procedure is her only hope. Only Ruth can save her — and scores of others — from the harrowing consequences of Robert's ambitions.

Inspired by a shocking chapter in medical history, "The Lobotomist's Wife" is a galvanizing novel of a woman fighting against the most grievous odds, of ego, and of the best intentions gone horribly awry.

"Base Notes" by Lara Elena Donnelly

In New York City everybody needs a side hustle, and perfumer Vic Fowler has developed a delicate art that has proved to be very lucrative: creating bespoke scents that evoke immersive memories — memories that, for Vic's clients, are worth killing for. But the city is expensive, and these days even artisanal murder doesn't pay the bills. When Joseph Eisner, a former client with deep pockets, offers Vic an opportunity to expand the enterprise, the money is too good to turn down. But the job is too intricate — and too dangerous — to attempt alone.

Manipulating fellow struggling artists into acting as accomplices is easy. Like Vic, they too are on the verge of burnout and bankruptcy. But as relationships become more complicated, Vic's careful plans start to unravel. Hounded by guilt and a tenacious private investigator, Vic grows increasingly desperate to complete Eisner's commission. Is there anyone — friends, lovers, coconspirators — that Vic won't sacrifice for art?

"Impossible To Forget" by Imogen Clark

Just turned 18, Romany is on the cusp of taking her first steps into adulthood when tragedy strikes, and she finds herself suddenly alone without her mother, Angie, the only parent she has ever known. In her final letter, Angie has charged her four closest friends with guiding Romany through her last year of school — but is there an ulterior motive to her unusual dying wish?

Each of the four guardians possesses an outlook on life that Angie wants to give her daughter as a legacy. Three of them have known each other since university: the eternally nomadic and exotically named Tiger; the shy and practical Leon with his untapped musical genius; and Maggie, a brilliant lawyer who doesn't know her own abilities. But the fourth guardian is a mystery to the others: they've never even heard of former model Hope before…

As the guardians reflect on their friendship with Angie, it becomes apparent that this unusual arrangement is as much about them as it is about Romany. Navigating their grief individually and as a group, what will all five of them learn about themselves, their pasts — and the woman who's brought them all together?

"The Raven Spell: A Novel (A Conspiracy of Magic Book 1" by Luanne G. Smith

After a nearly fatal blow to the skull, traumatized private detective Ian Cameron is found dazed and confused on a muddy riverbank in Victorian London. Among his effects: A bloodstained business card bearing the name of a master wizard and a curious pocket watch that doesn't seem to tell time. To retrieve his lost memories, Ian demands answers from Edwina and Mary Blackwood, sister witches with a murky past. But as their secret is slowly unveiled, a dangerous mystery emerges on the darkened streets of London.

To help piece together Ian's lost time, he and Edwina embark on a journey that will take them from the river foreshore to an East End music hall, and on to a safe house for witches in need of sanctuary from angry mortals. The clues they find suggest a link between a series of gruesome murders, a missing person's case, and a dreadful suspicion that threatens to tear apart the bonds of sisterhood. As the investigation deepens, could Ian and Edwina be the next to die?

"They Said They Wanted Revolution: A Memoir of My Parents" by Neda Toloui-Semnani

In 1979, Neda Toloui-Semnani's parents left the United States for Iran to join the revolution. But the promise of those early heady days in Tehran was warped by the rise of the Islamic Republic. With the new regime came international isolation, cultural devastation, and profound personal loss for Neda. Her father was arrested and her mother was forced to make a desperate escape, pregnant and with Neda in tow.

Conflicted about her parents' choices for years, Neda realized that to move forward, she had to face the past head-on. Through extensive reporting, journals, and detailed interviews, Neda untangles decades of history in a search for answers.

Both an epic family drama and a timely true-life political thriller, "They Said They Wanted Revolution" illuminates the costs of righteous activism across generations.

"Deconstructed: A Novel" by Liz Talley

Antique-store owner Cricket Crosby's life is turned upside down when she discovers that the rumors of her husband's affair aren't just leisurely southern gossip. Her plan: hire an investigator; find an attorney; enlist the help of her new assistant, Ruby; and make her husband pay.

Ruby knows how quickly everything changes. After a dicey past, she's determined to forge a new future by working for Cricket and reinventing herself as a designer, deconstructing vintage haute couture. If anybody can help mend a few tears in Cricket's life, she can.

But turns out Cricket's life isn't just a little torn. It's wrinkled, stained, and falling apart at the seams. With Ruby and her ragtag relatives — a soused PI and a hunky tow truck driver — Cricket is sleuthing her way to the truth, no matter how dangerous it gets.

Sure, Cricket's life isn't what she imagined. But she's embracing change and figuring out what she really wants. And that's kind of fabulous.

"I Am You: A Book about Ubuntu" by Refiloe Moahloli and Zinelda McDonald

In southern Africa, there is a belief called ubuntu — the idea that we are all connected. No matter where we're from or who we are, a person is a person through their connections to other people. With simple, lyrical text and charming artwork, this lively picture book first published in South Africa is the perfect introduction to the concept of ubuntu for young kids. A celebration of friendship and kindness, the book shows children the many ways that we are all one.

When a mysterious woman summons Nancy Balbirer to a Russian restaurant in New York City, the near stranger's shocking purple hair and even more shocking news send Balbirer simultaneously reeling back to her past and hurtling toward a future that, at almost 50 years old, she never dreamed possible. This romantic-comedy memoir tells the true story of how a pack of Hollywood television writers and the denizens of a fabled but cursed Manhattan apartment building helped the author and one of her best friends turn a 32-year almost romance into a real one.

Witty and heartfelt, Nancy Balbirer's sublime memoir proves that love is possible anywhere, anytime, and at any age.