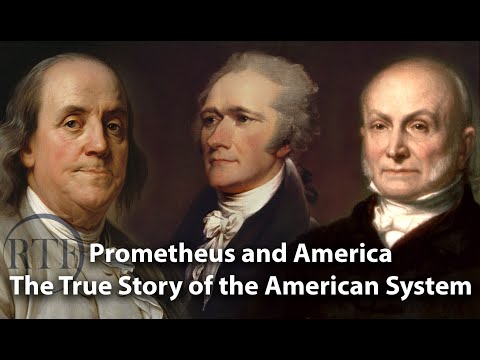 American Prometheus: The Book That Could Help Save The USA

This book could help save the United States.

A half century ago, the Anglo-American Establishment reversed the policies that made America rich, powerful, and humane. They erased our former way of thinking from public memory. They took away from us our original national mission: gaining scientific control over nature to uplift mankind.

They falsely inserted their own goal – power for the few over the many – into our history, so that no remedy from our real heritage seemed possible.

The secret to modern history, is that all the great breakthroughs in technology were deliberate projects for the improvement of humanity.

Chaitkin takes you behind the scenes, to see the two sides struggling to control American policy: nationalist statesmen and industrial innovators, versus the British empire, Wall Street and the southern slave owners.

Benjamin Franklin guides his friends in England who develop the steam engine, canals and steel making — and discover bio-chemical laws of nature.

Franklin and his close allies guide America’s revolt against the empire, write the Constitution, and strategize for a strong industrial nation-state.

The British turn the French Revolution to anarchy and mass bloodshed — the first documented account of that regime-change intervention.

America’s founding program is blocked, until a new generation of nationalist leaders fight the British again and start industrialization.

Acting as a team in government and the military, an idealistic core group builds U.S. canals, coal and iron industries, and railroads. They bring on modern times, and actively aid other countries’ industrial progress — all this against the violent opposition of the Anglo-American imperial interest.

Volume 1 takes us to the Civil War. Volume 2 (planned for 2021) carries the story of progress, versus empire, from Abraham Lincoln to John F. Kennedy.

More information on Anton Chaitkin’s upcoming book can be found on his site American Prometheus: Progress, vs. Empire from Franklin to Kennedy

And don’t forget to watch the promotional class delivered by Chaitkin which showcases his book and features a lively discussion with citizens across the Americas and Europe.

American Prometheus: The Book That Could Help Save The USA